Letting the air out of Genesis 1

Here’s the phenomenological treatment of the Genesis creation account I promised you, if you’re interested in the cosmology of the Bible. You’ll need to read my piece on “air” first to see where I’m coming from, but you might also want to take a look at a two-part scholarly article here and here  by Andrew Perry, of Durham University.

Perry attacks the arguments for the solid raqia made, most influentially for the TE community, by P H Seely (another case of BioLogos types preferring liberal historico-critical approaches to Scripture over conservative Evangelical ones). Even before Seely’s work Assyriologist W G Lambert had shown back in 1975 that attributing a “solid vault” of heaven to Mesopotamian cosmology was an error:

The idea of a vault of heaven is not based on any piece of evidence…Thus to the Babylonians the universe consisted of superimposed layers of the same size and shape separated by space.

These layers (Akkadian kippatu) are always flat, circular objects such as geometric circles or hoops, rather than three dimensional domes. There is no word for a heavenly domed vault in ancient Mesopotamia. After also surveying evidence from Egyptian, Hittite and Canaanite sources, Perry concludes:

Our conclusion from the ANE evidence is that the structure of ANE conceptions of the sky is different to that in Genesis 1. There is no one-to-one correlation to be had in any analysis of the different traditions. The differences with Genesis are too great. This raises the question as to why Genesis is not more like ANE mythology. The straightforward theological answer to this question is that, as God chose the nation of Israel above all other nations, so too he taught them in a singular way.

Like me he considers the descriptive element of Genesis to be “phenomenal”, and adds the useful insight that the narrator is seen as viewing events as it were from dry land, looking across at the horizon, rather than looking up at the apparent “vault” of heaven. Consider that in what follows, together with my suggestion that, since “air” has no word in Hebrew, we start with an ocean that has a surface, above which is “a space not needing creation”, containing (in Gen 1.2) both the active ruach (wind) of God and, of course, thick darkness. If God’s breath were in the deep, it would simply bubble up, as any Israelite child drinking from a pottery beaker knew! And so:

Notice the earth already exists as the seabed, but it is named formally only on Day 3, when its scope is restricted to the “dry” revealed by the gathering of the sea. So be careful before claiming eretz means “the world”, “the solid part of the earth”, “the dry land” or “Mesopotamia” – it can mean any of those. Next:

As I said in the last post, with no concept of air to scatter light, there was no phenomenological reason to associate light only with the sun, or with any material thing. The blue sky is light (though the meaning of the text has more to do with the function of time, the alternation of light and dark). 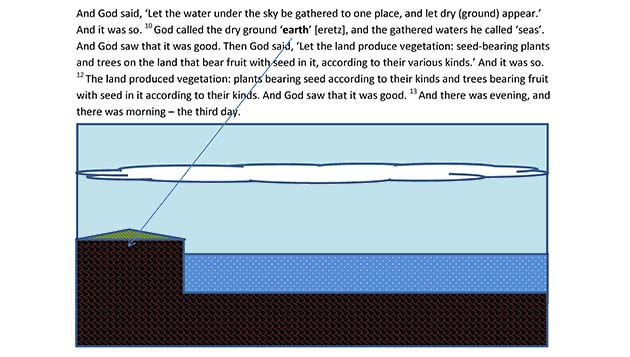 From hereon it’s conceptually easier – the lower waters gather to reveal the land, whose crowning glory is vegetation. 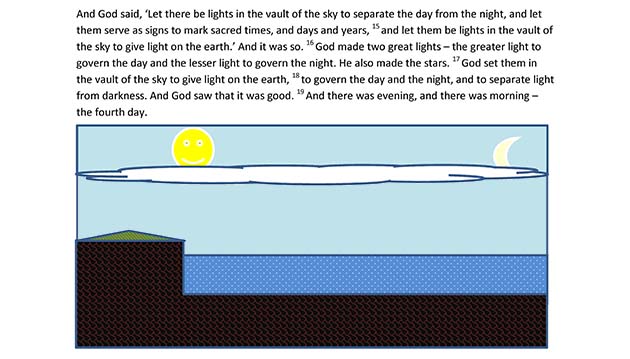 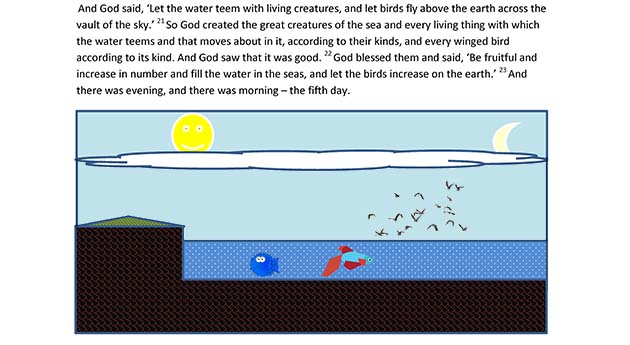 The only point here is that birds are said to fly in the heavens in Hebrew – not below a solid sheet. Incidentally, notice I’ve left the NIV translation “vault of the sky” even though, on any etymology, it’s plain wrong: raqia is derived from a root for “stretch”, which might lead one (wrongly!) to imagine a metal sheet – but never, ever, a vault. that word is derived from the 19th century mistranslation in the Babylonian Enuma elish, transferred across language and culture for a different word root and a different concept! 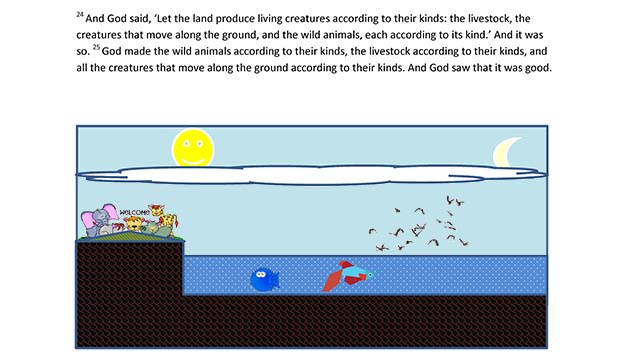 There, everything done except for mankind, which you can imagine. The above scheme allows for God to be called “Most High” from Gen 14 on, and to descend from, speak from, dwell in and otherwise utilise heaven as the highest part of creation, not meaning either “in the air” or “under a boundless ocean”. It also agrees with the Hebrew use of the intensive “heaven of heavens”, ie “highest heaven”, for God’s dwelling.

And, of course, it involves no speculative ancient science whatsoever – just a theological (functional and cultic) explanation of what you see out of your window.