I’ve nearly finished Suzan Mazur’s book, The Paradigm Shifters, which consists of a number of interviews with new thinkers in evolutionary science, mainly members of the Third Way group, about which I’ve written here and here. 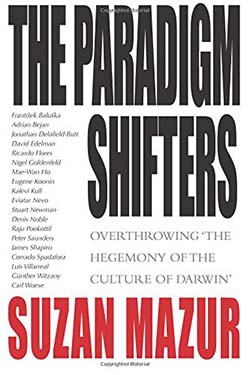 My almost-review is timely for two reasons. The first is that I see that I wrote the second of the posts linked above exactly a year ago today – why I should repeatedly write about this subject on my birthday is anybody’s guess.

The second reason is that Sy Garte has just published a favourable review of the new book by ID proponent Michael Denton on BioLogos, the potential importance of which for healing the scrappy bitching between Evolutionary Creationists and Intelligent Design people he rightly references on his own blog here.

It is interesting not only that non-IDers are calling for a change to the Neodarwinian paradigm in biology, but that there are so many different fruitful scientific approaches quite apart from specifically ID arguments. Denton’s approach in the new book, for example, is structuralist, akin to that of Richard Sternberg who was more or less forced into the ID camp by the professional hatchet job done on him by defenders of the ruling paradigm. Structuralism is about natural laws underlying the patterns seen in the forms of living things, and operates quite independently of the accepted mechanisms of mutation and natural selection. It is usually forgotten that structuralism was the ruling idea when Darwin went out of favour until the “modern synthesis” of the 20s and 30s took control.

Yet there is little or no reference to structuralism in Mazur’s book, though it covers nineteen significant and innovative workers in biology. Mazur is extremely well-informed, and has her own interests, which arise from those people she has already interviewed. But the effect of her repeating sometimes similar questions to the various interviewees is to act, herself, as a catalyst for the exchange of ideas. It’s clear that the new discoveries are so diverse that many are unaware of what is happening in other fields, and how it may connect with their own work.

The net conclusion from all is that the Neodarwinian paradigm is either defunct (so Denis Noble and Carl Woese) or in need of major extension or revision (so Eugene Koonin). What is clear is that there will not be one intuitively self-evident replacement idea like Darwin’s”natural selection” when this occurs. On the contrary, life is turning out to be as absurdly complex and multi-faceted as, say, human history.

There are, for example, the complexity theories themselves (like that of the physiologist Noble), which deal with emergent properties, but inevitably bump up against Aristotelian ideas of self-organisation and form. Teleology is also inherent in the “natural genetic engineering” of James Shapiro, which I’ve covered here for example. But there are many others, amongst which some recurrent of the themes are the importance of epigenetic mechanisms and, in contrast, the sidelining of the “gene” as anything but a loose analogical concept. Incidentally, “natural selection” is similarly interrogated as to its very coherence as a concept – not to mention being limited in the role it actually plays to that of a conservator, not an innovator.

The idea that the genome is a highly interactive database network, rather than a blueprint of “genes”, is now an assumption amongst these guys, rather than a possibility. The idea that you can identify individual genes for this and that is, despite GM and designer drugs, so last century.

Non-Darwinian “horizontal” processes like gene transfer and symbiosis are starting to be seen as ubiquitous, not rare (with a consequent blurring of the meaning of “the tree of life” and “common ancestry” both), and in particular the role of viruses is being explored as a major – or perhaps the major – source of genetic innovation. A far cry from the “viruses are satanic” attitude of some prominent TEs just a year or so ago. To say that 10% of our genome is viral is no longer shorthand for “junk”, but an indication of the interdependence and cooperation of life. Even our microbiome – whose cells outnumber the “human” cells in our bodies by 10:1 – is now being seen to contribute significant amounts of genetic material to us (and presumably vice versa).

Apart from these physical issues (though a reductionist word like “physical” begins to look rather out of place in the discussion of life), people like Eva Jablonka stress the importance of non-biologicals like cultural inheritance to evolution.

I almost forgot – the word “epigenetic” covers the surprising rehabilitation of Jean Baptiste Lamarck’s assertion of the inhertance of acquired caharacteristics. It’s now proven. in fact, few of Neodarwinianism’s “exclusive claims” remain unchallenged: the tree of life and common ancestry are being severely redefined, acquired characteristics are proven to be inherited robustly, the “central dogma” of the irreversibility of the DNA->protein transition is plain wrong, and so is the validity of the Weismann barrier, which says that somatic changes cannot enter the germ line. Gradualism is out, and saltation is back on the scientific agenda.

This book, I would say, is a must-read if you want to get a general overview of what current ideas are around, and just how parochial the old science is rapidly beginning to look. I, for one, can no longer take seriously a scientist who tells me that evolution is simply a change in gene frequency over time. That’s like saying that the whole of art is defined by different colours on paper.

The main message I want to raise from this, in the context of science-faith issues, is that most of the work that has been done to accommodate theology to Darwinian science is going to have to be re-done, as some of us would have predicted on principle: he who marries the spirit of the age soon finds himself a widower. Those who have, in contrast, accommodated Darwinian science to Christianity, through retaining the traditional strong doctrine of providence, for example, will simply be able to transfer that understanding to whatever new science comes along.

But those who have offered the selfishness of evolution as the inevitable cause of human sin, for example, rather than the inexplicable fall of a sinless Adam from fellowship with God, look very silly once evolution is shown to have no connection at all with selfishness.

The biggest challenge, I think, will be that the new science is so complicated intrinsically, and in its range of mechanisms, that it will be difficult for Christians to spot the underlying metaphysical commitments that colour the work its practioners produce. It’s hard enough in Darwinism, even though it should be obvious from Darwin’s own religious background and the militant materialism of its staunchest defenders, quite aprt from the mountains that have been written on the metaphysical background to Darwinism.

But despite Michael Denton, the new biology doesn’t self-evidently point to theism. It can certainly be used to argue for it – for the obvious internal teleology of what amounts to a tangled mass of separate causes, resulting in the beautiful and balance biosphere we all experience, really requires God as the overarching organizer. This may be valuable in focusing on the true design argument – that design is seen in the outcomes, far more than the mechanisms. As Aquinas argiued, if there is wise order in the world, a Wise Orderer is far more probable than chance.

Not all see things that way, however. One thing that one sees recurrently in Mazur’s book is how drawn a number of the researchers are to the process philosophy of Whitehead (as distinct from process theology). The glimpsing of a pattern in the tangled web of natural causes clearly suggests mind, but in the secular scientific climate generated by quantum strangeness, the idea of that mind as arising interactively between the constituents of the universe is something of a attraction to the religiously non-committal. That is even a danger in theistic evolution, whose own recent intellectual heritage has drawn a lot from process thinkers like Peacocke.

So my message to TEs is this: take note of the new science, because the old is being superceded (“for the times they are a’changing”). But don’t make the mistakes that were made with the old science of seeking to rewrite your theology to match the “assured findings of science”. Get your doctrine right, from first theological principles, and Christ will be found to be as sovereign in the new system as he was, in fact, in the old.