In between spotting rare birds in the reedbeds and sampling real ales in country pubs, I took the opportunity of some time away this week to read Michael Denton’s Evolution, Still a Theory in Crisis. As agreed by both Darrel Falk, former President of BioLogos and Sy Garte, respected colleague on The Hump of the Camel, in their respective reviews it is an important book, which is why I will put it on the Books We Like page at the earliest opportunity. 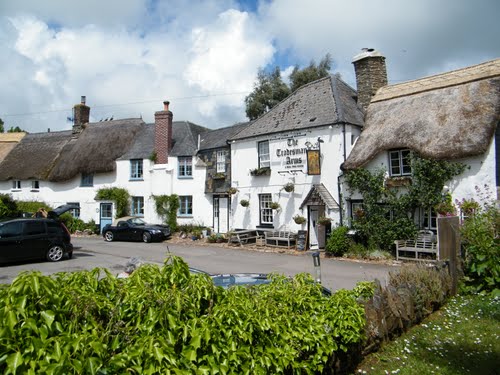 Tradesman’s Arms, Stokenham – one to visit!

Not that Denton’s thesis is entirely new. Perhaps the simplest summary is that it is a re-affirmation of his first book questioning the Neodarwinian Synthesis thirty years ago, now strengthened by much work in biology since, combined with a new structuralist viewpoint which he inherits from Richard Owen before and during Darwin’s time.

I might add (because Denton doesn’t stress it) that structuralism – the idea that much of biological form depends on lawlike constraints, rather than adaptive contingency – was the prevalent theory of evolution, in the form of orthogenesis, at the time when Darwinism was found wanting in explanatory power at the beginning of the twentieth century. It was only the Neodarwinian Synthesis that rehabilitated Darwinism, and it was the hegemony of that Synthesis within western biology that not only wrote the case for structuralism out of science, but virtually out of history as well. The replacement of Owen’s statue in London’s Natural History Museum, which he established, with Darwin’s, is the epitome of that rewriting of history, as Denton mentions.

Denton’s structuralism is a well-argued return to the reality of essentialism in biology: there are indeed true discontinuities between taxa that simply cannot be explained by natural selection. If so, then Aristotle was actually observing nature more accurately than we have for the last century or so, in our dogma that all life is a continuum of contingently changing components. Because these discontinuities constitute some of the most significant features of living things, they radically relativise the significance of natural selection. To a large extent, selection becomes the tinkerer that merely fine-tunes microevolution, whereas what Denton argues to be natural laws of emergence are what paints the grand picture of life.

Although his main aim is to show the evidence for such emergent phenomena, Denton extends the argument from his previous book, Nature’s Destiny – that nature’s laws reveal a fine-tuning for human life at all levels from cosmological constants to chemistry – to the evolution of life itself (a belief shared by Owen, all the early theistic evolutionists and even Alfred Russel Wallace).

I want, in a couple of posts, just to air some implications that seem to arise from his insights, for a truly theistic understanding of nature. Today, I just want to play with the idea of common descent, which Denton himself regards as demonstrated beyond reasonable doubt on many fronts. I have no problems with that – but I do begin to see that, divorced from the belief in universal Darwinian gradualism, common descent becomes an idea without much significance. Owen, for example, saw no reason why life would not emerge repeatedly in many places, since he saw it as no fortuitous accident, but built into the fabric of natural law.

Let’s begin by floating an idea that Denton actually quotes from Darwin himself: that the features that we highlight to construct the nested heirarchies used to support common descent are by their very nature those farthest removed from adaptive selection. To take his first example, the pentadactyl vertebrate limb (extensively studied by Owen), the whole point is that it has remained universal amongst the whole vertebrate clade for 400 million years, despite every adaptational exigency to which it has been turned from flying or swimming or digging holes to writing books. It cannot possibly, then, be evidence for Darwinian evolution. Indeed, Denton points out that the very existence of a nested heirarchy is evidence against Darwinian processes as the major player in evolution, for change without direction ought to lead to taxonomy without patterns.

Denton himself considers that pentadactyly, and similar examples, constitute good evidence for common descent itself, but I should remind you that the nested heirarchy was formerly, by those like Linnaeus, considered telling evidence for the special creation of every possible species by God. (As Denton points out, it was a garbled adoption of that idea that led Darwin to quote, more than once, Aristotle’s aphorism natura non facit saltus in insisting on gradualism).

If there are emergent laws of form, as Denton argues, then gradualism is no longer a requirement in evolution. He consistently argues that the evidence from the fossil record, taxonomy and much genetics is that the important changes were relatively, at least, saltational. Let me run with that for a moment, commencing with an example that seems fairly well established: the saltational acquisition of mitochondria by eukaryotes through Lynn Margulis’ suggestion of a fusion of two disparate forms of life. Whatever further adjustments arose by adaptation through that assumed saltation, there was a profound discontinuity between the two pre-existing lineages and the resulting clade of eukaryotes.

Or, in less easily-conceived processes, let us suppose that emergent laws explain some of Denton’s other examples, such as the necessarily sudden (and yet horrendously complex) extrusion of the nucleus from the mammalian erythrocyte, the evolution of the theropod feather or, indeed, that pentadactyl limb. Or ORFan genes. Or turtle anatomy… or the phenomenon of developmental systems drift. Such discontinuities have no known, and in most cases no conceivable, adaptive origin. They arose de novo – and perhaps they even arose more than once in different lineages, as some examples of “convergent evolution” suggest. In such cases (a majority, in fact, of taxon-defining features), not only do we have no clear knowledge of the ancestors in which they occurred, but it doesn’t appear to matter much anyway.

To use some biblical analogies, we would learn little about the miracle at the wedding in Cana by comparing the wine with a sample of the water. In fact, we would have no way of knowing which of a set of water samples was “ancestral” to the wine. Neither would it matter very much. In like manner, perhaps genetic examination of the scraps of fish after the feeding of the five thousand would confirm they were from two separate genomes of a commonly-eaten local fish. But that would tell us nothing whatsoever about their multiplication, which is the only point of interest. In the same way, if some fundamental and unpredictable change occurs in a living form, not demonstrably influenced either by its history or its external circumstances, what does the genealogy tell us that is useful, or even interesting?

Here we are, of course, considering miracles rather than what are, Denton insists, entirely natural saltations resulting from emergent laws within nature. But I use these miraculous examples advisedly, because I find myself asking what the difference actually would be between a “natural saltation” or a “fine-tuned emergent law of life” and a direct creative act of God. I’ll look at that in another post (or two).

Meanwhile, I’ll just ask you to consider whether the obsession of biology with common ancestry would have any purpose whatosever if the day came when Darwinian gradualism were finally concluded to have only secondary importance for the origin of the species. 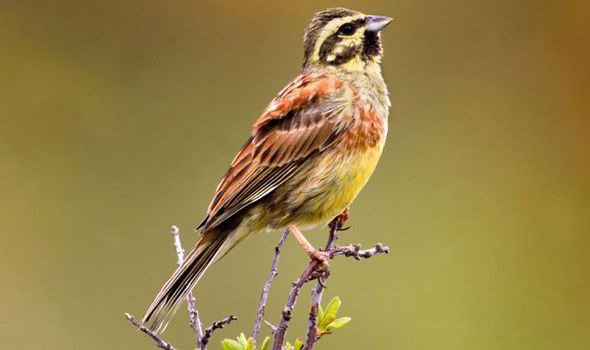 This week’s uncommon sighting – a cirl bunting (not my photo). The morphological taxonomy of buntings (surprise, surprise) is at odds with the genetic: in this case possibly due to another gradualist misunderstanding mentioned by Denton – the equidistance phenomenon studied by Shi Huang (http://www.thethirdwayofevolution.com/people/view/shi-huang)