Meet my friend, the bullfinch. It was our personal interaction which enabled me to get this photo last week. 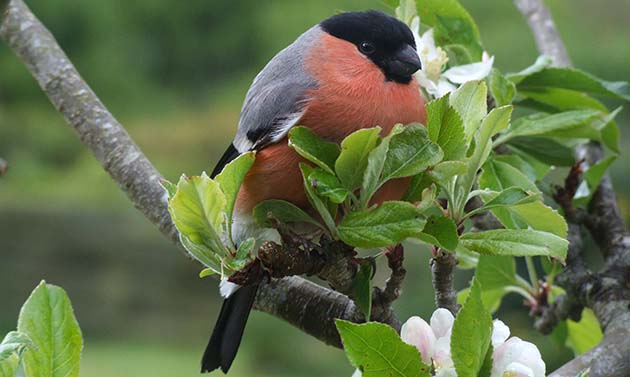 He was actually a victim of our greenhouse, probably stunning himself as he tried to fly through it. [Correction – traces of pink feathers found on our bedroom window today – he must have flow about 60 feet on autopilot before ditching].

All I knew was that I almost trod on him as I went to feed the chickens, saw he was alive, but rather still, and wasn’t sure whether he was succumbing to some avian flu or had knocked himself out (a nuthatch wasn’t so lucky with our kitchen window the following day and died – we’ll have to black out our house, I see).

As for the bullfinch, he was able to perch on my finger, which was encouraging, but after a bit it seemed wiser to put him on an apple tree where he could peck at some buds if malnutrition was his problem. Since he seemed quite undisturbed, I thought to grab my camera and take a few snaps. By the time I had finished loading them on to the computer, a rain shower had come and he’d flown off. He’s been around with his wife ever since (my own wife claims he’s sticking to his benefactor – where’s the harm in a bit of sentimental anthropomorphism?)

I’ve got into the habit, with any species that crosses my path in a personal way, of checking out its evolutionary background, because in pretty well every case I have found that there are contradictions, uncertainties or controversies that leave one wondering where the cases that straightforwardly support the standard assumptions of evolutionary theory are. Quite often, I’m led into interesting and informative byways, and that’s the case here.

So, what about a beautiful, but randomly stunned, member of the finch family? Individually the genus has a unique sperm morphology, for whatever obscure reason. A saltation, as far as any phylogenetic evidence is concerned. But of the finches in general (it’s unusual to think genetically about finches that don’t live in the Galapagos, isn’t it?):

Limits of the genera and relationships among the species are less understood – and subject to more controversy – in the carduelines than in any other species of passerines, with the possible exception of the estrildines [waxbills].

Ah – so yet another exception to the rule. You may remember the buntings I mentioned last week are also “not well understood” and show a conflict between taxonomic and genetic evidence, leading to a major set of reclassifications recently as genetics is now believed to be reliable, and morphology is halfway to being seen as a partner to phrenology. Sure enough, the same dysjunction occurs in the finches:

Beginning in around 1990 a series of phylogenetic studies based on mitochondrial and nuclear DNA sequences resulted in substantial revisions being made to the taxonomy. Several groups of birds that had previously been assigned to other families were found to be related to the finches… The three largest genera, Carpodacus, Carduelis and Serinus were found to be polyphyletic. Each was split into monophyletic genera. The American rosefinches were moved from Carpodacus to Haemorhous. Carduelis was split by moving the greenfinches to Chloris and a large clade into Spinus leaving just three species in the original genus. Thirty seven species were moved from Serinus to Crithagra leaving eight species in the original genus.

Get the idea? Just one more bit of information from my sources:

Fossil remains of true finches are rare, and those that are known can mostly be assigned to extant genera at least. Like the other Passeroidea families, the true finches seem to be of roughly Middle Miocene origin, around 20-10 million years ago (Ma).

OK, then. As far as the positive evidence goes, finches have been around for up to 20 million years, and most fossils, though rare, are from existing genera or possibly even existing species, suggesting the now-familiar and scarcely-darwinian pattern of sudden radiation into the present genera and then prolonged stasis.

But despite this apparently straightforward history, the words and figures on the cheque once more do not agree, and the genetics tells a significantly different story from the morphology. Are biologists justified in correcting the latter by means of the former? The work of one controversial member of the Third Way grouping, Huang Shi, argues not (I’ll add a caveat to that later).

Back in 1963, the first comparative genetic sequencing of a number of animals was done for cytochrome c by Margoliash. He found that similarities and differences between speces broadly matched accepted evolutionary relationships, but that they were all far more, but more or less equally, different from the primitive yeast cytochrome (hence the term “equidistance phenomenon”).

His suggestion that this might mean a roughly constant rate of mutation in evolution soon led to the (“ad hoc” – Huang) concept of the “molecular clock”, used to give absolute dating to evolutionary events. In more recent years, this concept has been repeatedly falsified – mutation rates vary greatly round the genome and in different taxa… and yet you still often hear of palaeontological chronology being “corrected” by genetics, and on one public forum discussing it, it was clear that Joe Public sees “genetics” as being sciency and reliable, compared to old hat stuff like digging up fossils.

But before it was a falsified theory, the molecular clock was the main grounding for Kimura’s neutral theory, which is even now the dominant theory of genetic evolution (whilst, paradoxically, natural selection is held to govern the evolution of phenotypes as if they were not interdependent). Genetic phylogeny is, therefore, now done on genes believed not to be under selection, on the assumption that there is (a) a steady divergence of such genes from the ancestral type by drift and (b) that this is predictable enough to give at least approximate chronologies.

Such methods are the basis of, for example, commonplaces like “chimpanzees separated from humans 6 million years ago” and “the morphological similarity of humans to orang utans rather than chimps is an illusion as the genetic divergence is greater than that between us and chimps.” Repeat similar arguments for finches or buntings.

Yet, as we saw, neutral theory was based on the (discredited) molecular clock, which was in turn an assumption based on the belief that the equidistance phenomenon meant increasing divergence of mutations in genes. Huang, however, has re-examined the original equidistance phenomenon and apparently falsified that assumption. Here are a couple of surprising illustrations of what Huang’s studies show.

Huang’s theoretical answer to this, the Maximum Genetic Diversity hypothesis, is intriguing but needn’t concern us overmuch here – there are plenty of sources on the web if you’re interested. But the bottom lines are (a) that the idea of tracing phylogenies via genetic divergence are, except in very restricted cases, based on a falsified premise and (b) that the neutral theory on which such phylogenies depend has also lost its solid foundation.

Huang, in fact, believes his theory provides evidence that all, or most, of the genome is functional – a stance which has led to the usual anathemas from the Neodarwinian establishment, rejection of his research papers (in the west at least – China is another matter), and a bitterly amusing fightback from Huang, whose personality isn’t, apparently, one to take being silenced by consensus authority  lying down.

Now recent work that Huang has done suggests that molecular divergence may, indeed, be of use in phylogenetic studies. This was done on related bacterial species. It’s not clear whether the same would be true of similar advanced species, and the distinction matters since his “Maximum Genetic Diversity” hypothesis, in essence, says that the increase in epigenetic diversity up the evolutionary scale (ie, the increasing complexity of layered genetic control networks) limits the possibility of gene variation. As I read that, depending on what is eventually discovered about the epigenetic differences of advanced species and genera, it cannot be taken for granted that genes will diverge, rather than (perhaps) moving around within fixed parameters according to environmental factors (as Huang suggests).

So, perhaps, our similarities to chimps may say more about genetic adaptation to similar environments, whilst we are actually more closely related to orang utans as the morphologists claimed. Likewise, perhaps genetics has unwittingly reclassified finches and their morphologically unsuspected out-groups according to their environments, rather than their actual descent.

Remember, morphology in an evolutionary setting was based on the reasonable assumption that evolving characteristics will inevitably diverge progressively from their ancestral form (an unproven axiom based on Darwinian gradualism), and morphologists are extremely skilled and very careful in identifying such divergences. Whenever a genetic phylogeny overturns a morphological one, it is necessarily either denying that morphological evolution follows such a consistent gradual path, or accusing the morphologists of incompetence.

But such overturnings place reliance on an alternative unproven axiom, based on Kimura’s neutral theory: that evolving genes will inevitably diverge progressively and gradually from their ancestral form. Both cannot be true at once unless they produce identical results, and the prevalance of contradictory results (despite the textbooks’ telling kids that they confirm each other and Darwin’s theory) actually should alert us that neither can be relied on as a tool either for the detailed phylogenies proposed, nor for confirming the overall biological theories they are claimed to support.

To me, it’s more interesting that there is a whole fascinating and beautiful new world that revolves around my providentially-supplied friend the bullfinch as he actually exists, rather than as he’s conjectured to have originated.