The root of Wesleyan views on providence

The Sermons of John Wesley – Sermon 67
On Divine Providence [extracts]

1. The doctrine of divine providence has been received by wise men in all ages. It was believed by many of the eminent Heathens, not only philosophers, but orators and poets. Innumerable are the testimonies concerning it which are scattered up and down in their writings; agreeable to that well-knowing saying in Cicero, Deorum moderamine cuncta geri: “That all things, all events in this world, are under the management of God.” We might bring a cloud of witnesses to confirm this, were any so hardy as to deny it.

…
19. But what say the wise men of the world to this? They answer, with all readiness, “Who doubts of this? We are not Atheists. We all acknowledge a providence. That is, a general providence; for, indeed the particular providence, of which some talk, we know not what to make of: surely the little affairs of men are far beneath the regard of the great Creator and Governor or the universe! Accordingly,

‘He sees with equal eyes, as Lord of all,
A hero perish, or a sparrow fall.'”

20. But, in support of a general, in contradiction to a particular providence, the same elegant poet [Pope] lays it down as an unquestionable maxim,

The Universal Cause Acts not by partial, but by general laws:

Plainly meaning, that he never deviates from those general laws in favor of any particular person. This is a common supposition; but which is altogether inconsistent with the whole tenor of Scripture. For if God never deviates from these general laws, then there never was a miracle in the world; seeing every miracle is a deviation from the general laws of nature. Did the Almighty confine himself to these general laws, when he divided the Red Sea, when he commanded the waters to stand on a heap, and make a way for his redeemed to pass over? Did he act by general laws, when he caused the sun to stand still for the space of a whole day? No; nor in any of the miracles which are recorded either in the Old or New Testament.

21. But it is on supposition that the Governor of the world never deviates from those general laws, that Mr. Pope adds those beautiful lines in full triumph, as having now clearly gained the point: —

Shall burning Etna, if a sage requires,
Forget to thunder, and recall her fires?
On air or sea new motions be imprest,
O blameless Bethel! to relieve thy breast!
When the loose mountain trembles from on high,
Shall gravitation cease, if you go by
Or some old temple, nodding to its fall,
For Chartres’ head reserve the hanging wall?

We answer, If it please God to continue the life of any of his servants, he will suspend that or any other law of nature: The stone shall not fall; the fire shall not burn; the foods shall not flow; or, he will give his angels charge, and in their hands shall they bear him up, through and above all dangers!

22. Admitting then, that, in the common course of nature, God does act by general laws, he has never precluded himself from making exceptions to them, whensoever he pleases; either by suspending that law in favor of those that love him, or by employing his mighty angels: By either of which means he can deliver out of all danger them that trust in him.

“What! You expect miracles then?” Certainly I do, if I believe the Bible: For the Bible teaches me, that God hears and answers prayer. But every answer to prayer is, properly, a miracle*. For if natural causes take their course, if things go on in their natural way, it is no answer at all. Gravitation therefore shall cease, that is, cease to operate, whenever the Author of it pleases. Cannot the men of the world understand these things? That is no wonder: It was observed long ago, “An unwise man doth not consider this, and a fool doth not understand it.”

23. But I have not done with this same general providence yet. By the grace of God, I will sift it to the bottom: And I hope to show it is such stark-staring nonsense, as every man of sense ought to be utterly ashamed of.

You say, “You allow a general providence, but deny a particular one.” And what is a general, of whatever kind it be, that includes no particulars? Is not every general necessarily made up of its several particulars? Can you instance in any general that is not? Tell me any genus, if you can, that contains no species. What is it that constitutes a genus, but so many species added together? What, I pray, is a whole that contains no parts? Mere nonsense and contradiction! Every whole must, in the nature of things, be made up of its several parts; insomuch that if there be no parts, there can be no whole.

24. As this is a point of the utmost importance, we may consider it a little farther. What do you mean by a general providence, contradistinguished from a particle? Do you mean a providence which superintends only the larger parts of the universe? Suppose the sun, moon, and stars. Does it not regard the earth too? You allow it does. But does it not likewise regard the inhabitants of it? Else what doth the earth, an inanimate lump of matter, signify? Is not one spirit, one heir of immortality, of more value than all the earth yea, though you add to it the sun, moon, and stars nay, and the whole inanimate creation? Might we not say, “These shall perish; but” this “remaineth: These all shall wax old as doth a garment;” but this (it may be said in a lower sense, even of the creature) is “the same, and his “years shall not fail”?

25. Or do you mean, when you assert a general providence, distinct from a particle one, that God regards only some parts of the world, and does not regard others? What parts of it does he regard? Those without, or those within, the solar system? Or does he regard some parts of the earth, and not others? Which parts? Only those within the temperate zones? What parts then are under the care of his providence? Where will you lay the line? Do you exclude from it those that live in the torrid zone or those that dwell within the arctic circles? Nay, rather say, “The Lord is loving to every man,” and his care “is over all His works.”

26. Do you mean (for we would fain find out your meaning, if you have any meaning at all) that the providence of God does indeed extend to all parts of the earth, with regard to great and singular events, such as the rise and fall of empires; but that the little concerns of this or that man are beneath the notice of the Almighty? Then you do not consider that great and little are merely relative terms, which have place only with respect to men. With regard to the Most High, man and all the concerns of men are nothing, less than nothing, before Him. And nothing is small in his sight that in any degree affects the welfare of any that fear God and work righteousness. What becomes, then, of your general providence, exclusive of a particle? Let it be for ever rejected by all rational men, as absurd, self-contradictory nonsense. We may then sum up the whole scriptural doctrine of providence in that fine saying of St. Austin, *Ita praesidet singulis sicut universis, et universis sicut singulis!*: that he presides over every individual as over the universe, and the universe as over every individual.

Lastly: In what a melancholy condition are those who do not believe there is any providence; or, which comes to exactly the same point, not a particular one! Whatever station they are in, as long as they are in the world, they are exposed to numberless dangers which no human wisdom can foresee, and no human power can resist. And there is no help! If they trust in men, they find them “deceitful upon the weights.” In many cases they cannot help; in others, they will not. But were they ever so willing, they will die: Therefore vain is the help of man and God is far above, out of their sight: They expect no help from Him. These modern (as well as the ancient) Epicureans have learned that the

Universal Cause Acts not by partial, but by general laws.

He only takes care of the great globe itself; not of its puny inhabitants. He heeds not how those

At random on the air-suspended ball.

How uncomfortable is the situation of that man who has no father hope than this! But, on the other hand, how unspeakably “happy is the man that hath the Lord for his help, and whose hope is in the Lord his God!” who can say, “I have set the lord always before me; because he is on my right hand, I shall not be moved!” Therefore, “though I walk through the valley of the shadow of death, I will fear no evil: For thou art with me; thy rod and thy staff comfort me.”

* Note that Wesley has unconsciously imbibed the modern distinction of “supernatural” and “natural”, giving a legislative character to “laws” which are, in fact, merely descriptive of God’s common government. 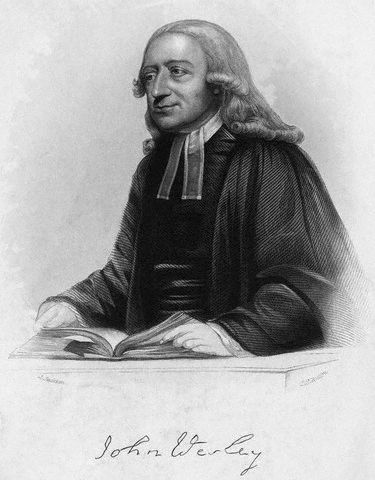 3 Responses to The root of Wesleyan views on providence