I retain a nodding interest in the peppered moth, because it was one of the main examples of evolution I was taught in A-level zoology in the late ’60s. Since then it has suffered ups and downs both in real life and in its academic reputation.

The peppered moth story pre-dates the Neodarwinian Synthesis, being a nineteenth century example of natural selection to support Darwin’s own theory: the predominance of a melanotic form over the previously ubiquitous non-melanotic form in industrial areas, an explanation suggested by J W Tutt in 1897. If you don’t know the basic story, you should read more school biology textbooks.

Renowned experimental work in the 1950s by Kettlewell seemed to confirm the natural history of bird predation behind the Victorian claim, but Jerry Coyne, no less, cited research suggesting the experiments were poorly designed (though he seems to have got his information from a paper rather than the book he claimed to be reviewing – the “no-view” is another theme endemic to modern science). A popular book went further and called the whole thing a fraud, but diligent and extensive research by Michael Majerus eventually vindicated Kettlewell and the history of the melanotic moth.

The story confirmed appears to be that a black form of peppered moth first appeared in one spot in the early 19th century, spread consistent with population genetics under the selection of an industrially polluted environment, and has declined again (though genetically dominant) as pollution has declined.

Now a Nature article, will tell you (if you have £22 to spare to read it) that its authors have pinned down the exact mutation that causes the dark form, and it turns out to be a 9,000 base transposon inserted into what is called the “cortex gene”. According to the BBC:

“Statistical inference based on the distribution of recombined carbonaria haplotypes indicates that this transposition event occurred around 1819, consistent with the historical record.”

(Slightly odd, that, as the oldest museum specimen, in Oxford, dates to 1811, but genes don’t lie…)

As pure science, the research is of some interest in its own right, and a good result from a lot of hard work. But within the context of the history of evolutionary theory, it is (like Darwin’s finches) not at all a straightforward confirmation of what we were taught in the era of Neodarwinian science.

The original, Victorian story is indeed vindicated – a story told before Mendel became mainstream, and when “genes”, let alone population genetics, weren’t even a gleam in their mother’s eye. The Victorians said – “Look, a black variation (cause unknown – cue gemmules) – in just a few decades, natural selection has favoured it.”

The subsequent history, of course, is that the same natural selection has disfavoured it, showing Darwinian evolution to be a two-way street rather than, as Darwin assumed, a ratchet towards perfection. But that fits the predictions of 20th century population genetics, for as a certain commenter at BioLogos has always been keen to point out, evolution is merely “change in gene frequency”, so a shift in the environment can easily tip the balance back towards the previous form of an allele, if it has not become fixed in the species.

Except that, as the new paper shows, the peppered moth’s adaptation was only secondarily due to gene frequencies – the initiating event was a totally new mutation. The original idea of population genetics was that evolution occurs mainly with the recombination of existing genes, “mutation” being seen as just the means of topping up the fuel of evolution, the “gene pool” (thus grudgingly accommodating Hugo de Vries 1901 theory of “mutationism”, originally a rival both to Darwin and Mendel, into the synthesis of their respective theories).

But in this case, the change arose from a brand new mutation, and not from existing genes. And that mutation was by no means one of the original “point mutations” envisaged when DNA came to be known: in those terms it is a veritable saltation – all of 9000 bases spliced slap bang in the middle of an existing gene – and not only that, but into a gene not known to be related to the trait in question:

Exactly how the mutation causes black colouring remains a mystery; cortex is not a gene with any known role in pigmentation.

As the abstract of the new paper states:

That’s true, in that though population genetics successfully modelled the change of distribution of “blackness” in the moth, the research shows in fact that it was not merely a case of gene shuffling, but the fruit of the entirely non-Mendelian insertion of a transposable element. Indeed, unless one uses the loosest of definition of “gene” in this case (ie, as a proxy for “blackness”) there is actually a complete disconnect between the actual DNA involved and the phenotypic trait concerned.

Transposons themselves are now widely recognised as important mediators of evolution at all levels, thanks to the belated recognition of the work of Lynn Margulis and her successors. Even so, that recognition has to jostle with persisting descriptions of them as “parasitic viral elements”, “selfish DNA” or, of course, “junk.” So the peppered moth, the icon of my school textbook on Neodarwinism, is actually an icon of Margulis’s “jumping genes” – and she’d given up publishing by the time I studied zoology, owing to her harrassment by the Neodarwinian establishment, so there’s a poetic justice involved somewhere.

I suppose a cynic might even say the peppered moth has been shown to be an icon of the evolutionary importance of junk DNA in the face of Neodarwinian denial.

That melanism in moths arose from a transposon insertion raises other interesting questions, for James Shapiro has implicated such events in his concept of “natural genetic engineering” – purposive genomic changes teleologically (and physiologically) made by organisms in response to stress. Melanism spread by natural selection, indeed – but did it really originate by chance?

Remember that “point mutations” were originally conceived as the main agent of genetic change because bigger alterations were virtually bound to break genes irretrievably, and probably kill the organism. Gradualism was the perceived answer to that: softly softly changee monkey. We now know that we have to deal with multiply expressed genes in multilayered interconnected control-networks (recall the cortex gene that controls blackness with no previously known role in pigmentation – but plenty of other known roles in wing formation). That means there is much, much more to go wrong when one makes big changes than was formerly assumed.

And yet the relatively rare event of inserting a 9000 base transposon “randomly” in a key functional gene produced an adaptationally advantageous change within half a century or so of the blackening of the environment that threatened the species through increased predation and made the change viable. Does that not strike one as very convenient? After all, the challenge was one that was completely new to the moths – they cannot possibly have had a potential solution built into their genome from previous similar situations. Yet the solution came not by gradual evolution over millennia, but in one fell swoop, at the dawn of the industrialisation that required it. Isn’t that intriguing?

One final point, and a call to further research, is that the peppered moth of the English industrial belt is not unique, as Wikipedia records:

The peppered moth Biston betularia is also a model of parallel evolution in the incidence of melanism in the British form (f. carbonaria) and the American form (f. swettaria) as they are indistinguishable in appearance. Genetic analysis indicates that both phenotypes are inherited as autosomal dominants. Cross hybridizations indicate the phenotypes are produced by isoalleles at a single locus.

So did American peppered moths, similarly placed under short-term pressure by industrialisation, also “randomly” insert a similar 9000 base transposon into the same place on the same cortex gene at the same time, or did they arrive at the same solution by an entirely different, but perhaps equally saltational, route? In either case, the timely production of such an adaptation over just a few years would seem to be another indicator that “there are no blind forces worth speaking about in nature”. 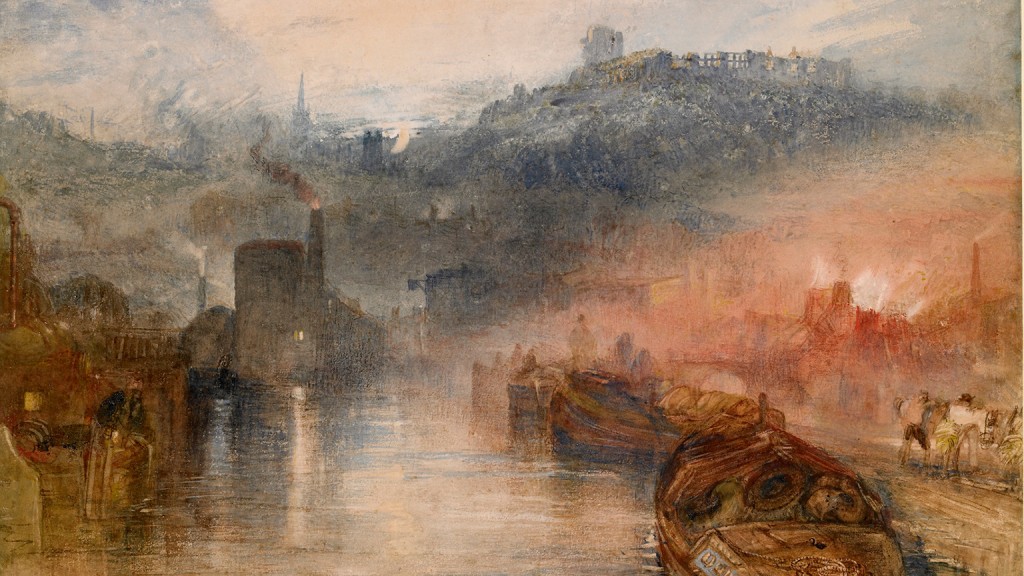 Dudley, Staffs, by Turner – painted at the time my Garvey ancestors were iron workers there. They survived by turning black…