The deep things of creation

Last time I looked at one passage often trotted out as overwhelming evidence for a solid raqia or firmament in the Genesis creation story, and showed, I hope, that another interpretation fits the context far better. As threatened, here’s a second post (and not the last, I fear) challenging the general conception of the “goldfish bowl universe” by debunking its details. In this case I want to look at the connotations of the word tehom, or “deep”, with which the supposed “primordial ocean” stretching boundlessly in all directions is often identified.

There is good evidence that Genesis 1 is not presenting a creation ex nihilo (though that concept is inherent and develops through Scripture). For the purposes of the narrative God is (as John Walton points out) depicted as acting in time and space to bring order out of chaos, rather than existence out of non-existence.

In literary terms, Gen 1.1 is a general summary of the account following – how God made the heavens (shemayim, the specific name give the raqia on Day 2) and the earth (eretz, the specific name given the dry ground or yabbashah on Day 3). “The heavens and the earth” is therefore a figure of speech called a “merism” covering the highest and lowest parts of the creation and everything in between – a point problematic in itself for the claim that the world floats like a bubble covered by the “vault of heaven” under an endless extent of water.

Now, I have several times questioned whether any ANE cultures had such an idea of a three-dimensionally boundless cosmic ocean, but as some scholars have pointed out, in any case their “cosmologies” vary so much that nothing should be read automatically into the Hebrew account. Yet that is routinely done – even one account I read today, starting with a caution against reading the text with presuppositions, supposes that Genesis 1.2 begins solely with a great (?infinite) ball of water which God, being outside of space-time, can look on spiritually whilst dwelling in eternal light (quite different from the earthly light created on Day 1). Count the anachronisms read into the text there! 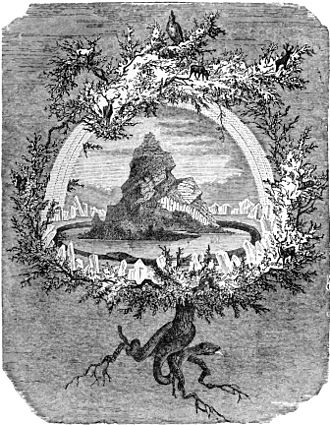 The Norse Cosmos accoding to the Victorians: plus ça change, plus c’est la même chose

In fact, it’s amazing how, phenomenologically speaking, Genesis 1 is far simpler and more easily conceived than many other “primitive” cosmologies – have you tried getting your head round the World Tree of Yggdrasil  for example (but note in the Wikipedia illustration how some Victorian has nevertheless contrived to map it to the same old generic goldfish bowl used for Genesis and Babylon!)? But if the creation account is accepted to start in v2, and treated phenomenologically, water is far from being the sole raw material, still less a ball of the stuff. What there is are elements familiar to us without having to learn any abstruse mythological concepts (though I hasten to add that phenomenology is the mere surface of the account – temple imagery does need to be considered to understand the meaning of the narrative).

We have, to start with, “earth” (eretz), despite that element’s being organised and named only later. Its problem is in being “empty and unproductive” (tohu wabohu), which is only remedied when God later separtes it from the water and makes it into dry land. Then we have “darkness” (subsequently incorporated into creation and renamed functionally as “night”), which is “on the face of the deep” – our keyword, tehom. 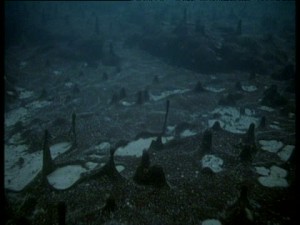 “Face” (panim) in Hebrew essentially means the visible aspect of something, and hence usually the human face, but also the face of the land, or the face of the sea. In other words, this deep has a surface, as water habitually does. It’s not unreasonable (and fits subsequent creation events) to assume that it also has a bottom, which is the as yet formless eretz – as shown in this modern picture of the floor of the Persian Gulf. Lest we’re in any doubt, the upper surface of the deep is mentioned again in relation to God (described in the form of wind or breath, ruach) hovering or brooding over the waters.

In other words, “the deep” is a primaeval layer of water lying on top of a primaeval layer of earth under an unspecified layer of primaeval nothing, or perhaps air – a later concept – which is primaevally dark. As befits an ANE “pre-cosmos” account, there’s no interest whatsoever shown about the lateral boundaries of these layers. It’s a “deep”, not a “width”. But how deep is “deep”? That’s the question.

In the “conventional” scheme, the separation of this deep by the raqia on Day 2 would actually partition off a relatively tiny lower proportion of the waters to make the seas, the vast majority being heaved upwards and forming the supposed cosmic ocean. Most of the universe would therefore be water above us (and also below the earth, pictured as floating despite the lack of any words to that effect in Genesis). You’d expect, then, that this vast and endlessly deep body of water would figure quite frequently when the Bible gets round to discussing cosmological matters, as it does in several places.

Now, “waters above the firmament” are mentioned fairly often in the Bible, usually in connection with rain, thunder and God’s dwelling and activity and often in connection with clouds. But if, as usually happens, the clouds are sidelined as irrelevant to the waters (which everybody knows are a cosmic ocean because they just are), these references actually give no quantitative clues. They fit just as well (and I can argue better) with the idea that the “waters above” are that small and wondrously light portion of the primaeval deep that was elevated to make the clouds to supply rain, dew and snow – and (as we saw last time) occasionally dust.

So what about the word tehom? If most of the waters are “up there”, then you’d expect the word, or others like it, to be used in that context throughout the Bible, just as we frequently use “space” colloquially for the great expanse of stuff beyond our atmosphere.

But instead tehom is always used in one of two ways. Most often, it means the seas, especially in their capacity as a rather unorganised realm. On some occasions it’s used of springs, “the fountains of the deep”. This, of course, has led people to assume that there is 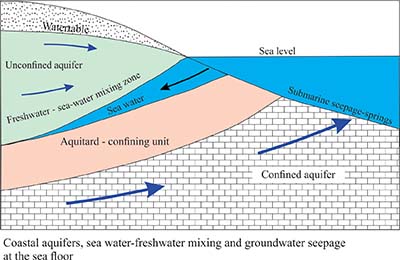 a connection between underground water-sources and the cosmic ocean. But it’s no less plausible to suggest the Hebrews believed there was some connection between subterranean water and the seas, which after all there is (since aquifers and marine water are hydraulically continuous).

But the explanation may be even more prosaic. Tehom, even more than the word “deep” in English, always implies a downward direction. So when the Exodus escape through the Red Sea is poetically described, the people tend to walk through the “depths” that God has driven back, and likewise the Egyptians to drown in the “depths”, even though the waters of Yam Suph are unlikely to to have been more than a few feet deep. So, barring accidents, water is always “down”, and springs, coming from underground, qualify as “fountains of the deep” on that basis alone.

That helps, once more, to give a sensible interpretation to Genesis 1.2: we are watching creation unfold from the place where God is acting – the space above the waters, in the depths of which is submerged the formless earth. But it’s not God’s viewpoint, but mankind’s, for when the heavens are formed, they are (to refer to the etymology) “heaved up”. All the “deep”, therefore, is still below us.

This point is, I think, stressed in the Flood Story. You may be familiar with the idea that the theological effect of the Flood is to reverse creation, as it were returning the earth to its original submerged and unproductive state. So it’s no coincidence that Noah, in his ark, is described as “floating on the face of the waters” (Gen 7.18), the exact place where creation started in the words of Gen 1.2. Incidentally, his tehom was apparently only fifteen cubits deep. Nowhere does the Bible countenance an infinite abyss (even though abyss is the Greek word used to translate tehom in the Septuagint translation).

An interesting reference to the two bodies of water is seen in Deut. 33, in which Judah is blessed:

May the Lord bless his land with the precious dew from heaven above, and with the depth (tehom) that lies below.

The water from below may somehow refer to the sea, or may be just a description of springs, but the deep is not above – only the dew is.

By wisdom the Lord laid the earth’s foundations, by understanding he set the heavens in place;
by his knowledge the depths were divided, and the clouds let drop the dew.

Another relevant, but seldom made, observation is the apparently odd fact of Day 5: that both sea creatures and birds are created on the same day, the day on which (according to the literary pattern of the narrative) the seas are peopled (just as the heavens are populated with sun, moon and stars on Day 4, and the land with animals and man on Day 6). This is actually easily understood if the fish and teeming water creatures are brought forth from the lower waters, and the birds from the upper waters. But that only makes much sense if the light and fragile “birds of heaven” are viewed as arising from light and vaporous clouds, rather than forming in an unplumbed cosmic depth and somehow, breaking through a solid raqia to the space beneath. Science it isn’t, but it’s poetically appropriate and phenomenologically consistent.

So, in summary, Scripture starts by describing an ordinary ocean extraordinarily and unproductively covering the land, and continues with that same concept, only with the ocean, the tehom, becoming restricted to the depths below the surface of the land – though not incompatibly with the notion, congruent with Gen 1.2, that however deep the ocean is, it has a solid bed in the foundations of the earth.

If Genesis has a concept that most of the water in existence is above the world it is silent about it, as is the rest of the Bible. It would have to be above God’s heaven too, for the beams of his upper chambers are laid, according to Ps 104, upon (not under or infinitely far away above) the “waters of the shemayim”, from which chambers he waters the mountains. Poetic licence allows for anthropomorphism here – but it drives a submarine and horses through the the idea of an infinite cosmic ocean.

Only tangentially related to the theme, but lovely nonetheless…