Just one more piece on detailed linguistic objections to the “goldfish bowl” cosmology so frequently attributed to the Old Testament. I’ve still one or two more generalised arguments to come, so if you’re not interested you’d better go off to the bar! This one is about the idea that the Hebrews believed that there were windows in the solid raqia of the heavens which God habitually opened to let in the cosmic ocean as rain. I’ll restrict myself to the negative case against this, rather than the positive, but surprisingly controversial, case for rain actually coming from clouds because I’ve dealt with it before here .

First, then, I must suggest that, phenomenologically speaking, Spike Milligan’s theory of rain is far more intuitively likely than that of trapdoors in the sky: 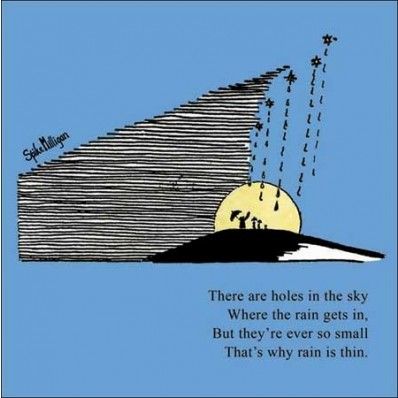 But the idea comes almost entirely from the Flood narrative of Genesis 7 and 8, in which (in the KJV) Yahweh opens “the windows of heaven” and “breaks open the springs of the deep” and, subsequent to the deluge, stops them up again. The word for “window” is ‘arubbah, which occurs only nine times in the whole Bible.

Oddly enough, only one of those occurrences unequivocally refers to ordinary windows, and even that may well be a figurative image for “eyes” (Ecclesiastes 12.3, talking of trouble and old age, when “those looking through the windows [?eyes] grow dim“). According to Young, the word signifies “woven work”, and Strong’s lexicon agrees in principle:

Feminine participle passive of ‘arab (as if for lurking); a lattice; (by implication) a window, dove-cot (because of the pigeon-holes), chimney (with its apertures for smoke), sluice (with openings for water) – chimney, window. 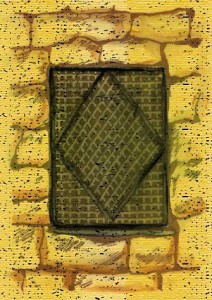 That etymology is, at least, far from intuitive to those who seldom lurk in dove cots or chimneys, but you see that the basic meaning, though not attested by examples in Scripture, is “lattice”, rather than a window-opening, for which the common Hebrew word is challon. This usage matches the evidence that unglazed windows were filled with a woven or net-like fabric, through which one could see out, and which can be opened if necessary for more light or air. So we can imagine Ecclesiastes’ geriatrics either peering literally through the ancient equivalent of net curtains or, figuratively, though their cataracts. 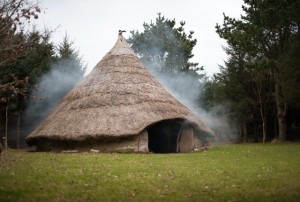 This also makes sense of the anachronistic use of the word for “chimneys” in Hosea 13.3, in which the idolaters will drift away “like smoke escaping through a ‘arrubah”. The first true chimneys were made in European castles in the 12th century AD – in OT times smoke from open hearths would either waft through the (woven) roof or through windows, perhaps placed high up for the purpose. In either case, smoke is diffusing through a permeable thatch or trellis, not belching from a chimney. I must also mention the word being used for “dove-cot” in Isa 60.8, in which it’s easy to imagine multiple openings resembling the lattice-work of the root word.

But how do transparent curtains in a domestic window come to be the “windows of heaven” pouring forth the Flood in Genesis, or even (as NIV and a couple of other translations have it) “flood gates”? The Bible has no such usage of real floodgates. Nahum 2.6 has a different word shearim for the river gates of Nineveh that were thrown apart so that city collapsed in a flood. They must have been pretty solid. And that’s pretty well the only occurrence of the idea – not surprising since Israel was a land on which regular rain fell, not needing irrigation, as Moses put in his sales pitch to the Israelites in the wilderness!

It’s true that the Septuagint, translated in Alexandria around the 2nd century BC, translates ‘arrubah in Genesis as “cataract”, καταρράκτης, the word used by the Greeks for the rapids of the Nile. But as Younker and Davidson point out in their critique of the solid raqia theory, it was these translators who, accommodating to the current Greek cosmology of a series of concentric solid spheres, first translated the “expanse” as as solid “firmament”, thus cementing the idea of a solid heavens in place. Once committed to that, it would seem they had little alternative to having floodgates too.

Most translations now still opt for the generic “windows”, but to me that still seems more akin to “trapdoors” than “lattices”. My own speculation is that it may well be that the image being conveyed is of the nebulosity of clouds, from which water issues like Hosea’s smoke. But if we allow that “openings” is what Genesis indeed means, do we have grounds for the critical scholars’ claim that Israelite cosmology believed rain came through such orifices from a cosmic ocean?

The fact is that, although windows, or in one case doors, are mentioned in heaven in the Old Testament, the two verses in the flood narrative are the only time they are associated with rain, which otherwise always comes, in a boringly science-friendly way, from clouds. These other instances are quite clearly entirely figurative. Let’s do a quick survey. 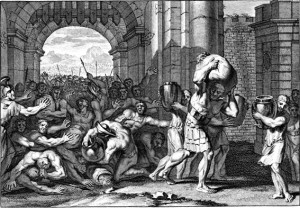 In 2 Kings 7.2,19: Elisha tells besieged Samaria that bread will be cheap the very next day. A chief officer doubts this is possible, “even if the Lord should make windows in heaven”. Note that God would have to make windows in heaven (which don’t already exist) in order to bring bread during a siege, and not water during a drought. For bizarre reasons (presumably for consistency with what it did to Genesis) NIV translates this as “if the Lord should open the floodgates of the heavens” – which would actually wash Samaria away, rather than make food cheap.

In fact, the allusion is likely to be not to the Flood at all, but to the provision of manna in Exodus, or at least Psalm 78’s retelling of it. In v23, describing Israel testing of God, this says:

Yet he gave a command to the thin clouds (shachaq) above
And opened the doors of the heavens (shemayim);
he rained down manna for the people to eat,
he gave them the grain of the heavens.
Men ate the bread of angels;
he sent them all the food they could eat.

Now, noting in passing the interesting poetic parallelism between “thin clouds” and “heavens”, for all the world as if the raqia were cloudy rather than solid, the imagery is clearly that of God opening his “palace” doors (rather than windows, in this case) to pour out the plentiful heavenly food within his storehouses of blessing. It self-evidently has nothing whatsoever to do with holes in the sky where the rain gets in.

In Isa 24.18 windows (‘arrabah) in heaven are opened, and the earth’s foundations are shaken in judgement. Once again NIV reverts to its doubtful but clearly addictive translation of “floodgates”. But this passage, as the previous verses make clear, is the start of the so-called “Isaiah apocalypse” predicting judgement on the whole earth – but it’s the very opposite of a flood. V4: “The earth dries up and withers…”. V6 “…Therefore earth’s inhabitants are burned up, and very few are left, the new wine dries up and the vine withers…”. Clearly, once more, the imagery is either that of God opening his heavenly dwelling to dispense judgement – or, more materially if poetically, perhaps it suggests the lattices of the clouds opening up to let through the scorching rays of the sun. But it cannot possibly be compatible with a cosmic ocean and sluice gates.

Malachi 3.10 is part of God’s argument against Judah that the spiritual blessing of his presence is withheld because they are, in various ways, unfaithful. He asks them to test him by bringing in the full tithes, when he will throw open the windows of heaven (or, if you insist on the NIV Septuagint Fest, “floodgates”!) and “pour out so much blessing that you will not have room enough for it.” You will note with interest that it does not say “let in so much water that you all drown”, which would be the inevitable result of throwing open floodgates in a solid firmament with a cosmic ocean above. But we needn’t fear that to be the correct translation, because God goes on to specify the blessing – prevention of pests in the crops, prevention of vines dropping their fruit, and the esteem of the nations at such a delightful land.

And that, ladies and gentlemen, is the entirety of what the Hebrew Bible has to say about windows in heaven. Only in the Flood story of Genesis is there any association with water whatsoever, so why should that single occurrence be taken literally when the other four occurrences are either figurative, or based on a cosmology that suggests that, on the upper side of the heavens, there is God’s dwelling place, and no body of water at all?

There’s another good essay, by the celebrated Presbyterian OT scholar, Dr R Laird Harris (d. 2008), dismantling the whole imaginative Victorian reconstruction of a non-existent Hebrew cosmology, here. Quite why Evolutionary Creationists prefer the modern myth is a mystery – maybe it’s because one of its main proponents, Peter Enns (heavily dependant on Paul Seely) used to be in leadership at BioLogos.

For myself, I suggest that the general idea of a lattice-work that acts to hide God, in heaven, from human view, but which can be opened to allow him to send down either judgement (wet or dry) or blessing (physical or spiritual), is better seen not as a set of floodgates in a solid dome – but as the clouds through which Moses had alone to pass in order go and meet with Yahweh “face to face”.

Clouds and thick darkness surround him;
righteousness and justice are the foundation of his throne. (Ps 97.2)