Having had my mind drawn back to “Genesis cosmology” in the last post (which showed that cosmology is actually culturally impossible in Genesis!) I might spend a few posts boring you all with some further observations seeking to undermine the detail of what, as far as I can see, is an entirely spurious idea of “ancient science”, which I call the “goldfish bowl cosmos”.

You’ll be familiar with this from many representations of the “ANE cosmology”, which in fact date from Victorian reconstructions. Interestingly, at least two people at BioLogos (one a fellow) have claimed that there are many similar representations in ancient Mesopotamian art. But unless anybody can produce me one, I say there are none at all. Not one. One of the BioLogos people, when pressed, found an Egyptian representation that I had already dealt with here, showing it’s a theogony derived from phenomenology, not a cosmology at all. But the Babylonians didn’t even illustrate that.

Anyway, today I’ll return to the hoary (and possibly boring) question of the alleged solid “firmament”, or raqia. I critiqued that here, but today I want to look in detail at what seems to be trotted out as the definitive proof text of the idea, in Job 37.18, which reads (in the NIV):

“Can you join him in spreading out the skies,
hard as a mirror of cast bronze?”

Now “skies” here represents shemayim, or “heavens”, the name given in Genesis to the raqia or “firmament” that separates the upper waters from the lower waters on Day 2 of creation. So if that raqia is created (or as the text says, “spread out”, raqa) “hard, like a bronze mirror”, the case for a thin, solid vault holding up an infinite primaeval ocean is pretty well proven, yes?

Well, no – actually. In the first place, the verse in Job 37 is not in the context of creation at all, but in the context of God’s controlling the weather both for sovereign blessing and government of the earth. The last human speaker, Elihu, starts his reflections on weather in 36.27, speaking of the mystery of how God controls what can only be described as the water cycle (incidentally showing that the Hebrews knew rain comes from the clouds that draw up water from the earth, not from a cosmic ocean above). Lightning is described poetically as God’s judgement, followed by the roar of his voice, as ch37 begins, and his ability to make it snow, or rain, or storm is presented as a demonstration of power, stopping men’s work and making animals take cover.

Continuing that theme Elihu then describes two inclement weather patterns in v9, “the tempest coming out of the south [aka ‘its chamber’], the cold from the north [aka ‘driving winds’]“. Both of these are unusual – the prevailing winds in Israel are from the west, bearing moisture from the sea. Wintry north winds, described in vv11-13, tend to bring snow and ice and what we might call “bracing” weather, and winds from the south, or southeast, bring a particularly nasty weather pattern early in the year commonly called khamsin or, in modern Hebrew sharav:

Sharav is the Hebrew word for heat wave and is one of the more depressing words in Hebrew. It is among the words you never want to hear, especially not in April (but as it is, in Israel you may have a Sharav in March and in November too).

Sharav is a dust-storm from the deserts to the south-eastof Israel. To quote another Israeli source:

Typically, in Israel, during a Sharav, temperatures can increase by 10° C within a few hours . This oppressive, dry heat is often accompanied by large amounts of dust. Be prepared if you are an allergy sufferer! Typically this weather condition lasts one or two days at a time. As soon as the Sharav breaks, the wind changes direction, and a cool sea breeze generally follows. Sometimes there is light rain too.
This extreme heat and wind is of great concern to farmers in Israel; crops can easily be damaged or destroyed.

Here’s what a sharav looks like in real life – this is Gaza city a year or two ago: 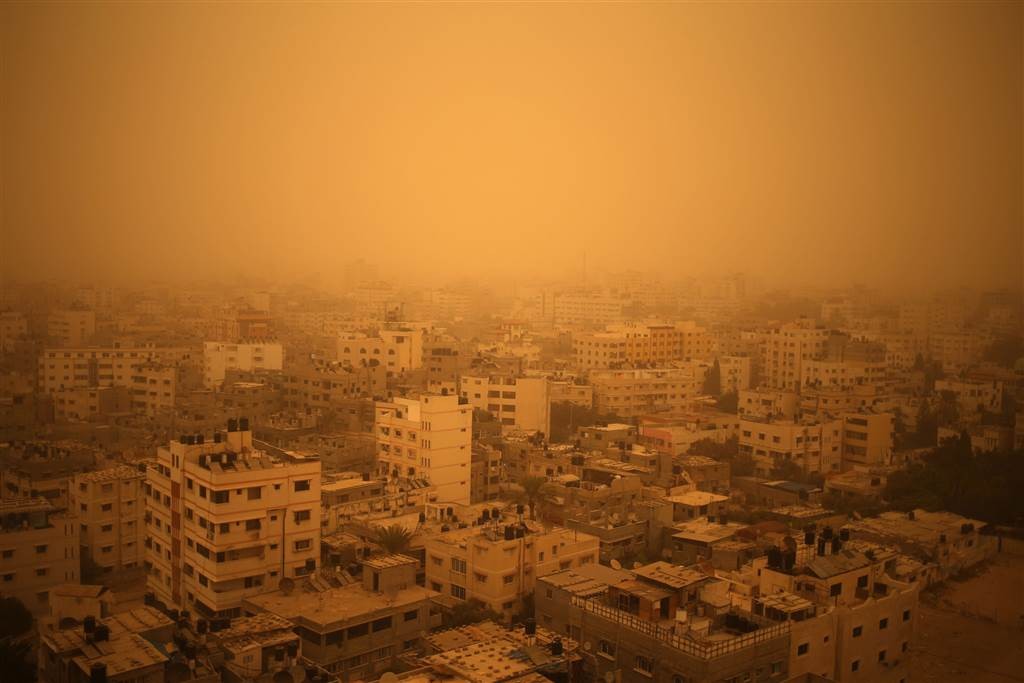 And here’s how hot it gets: 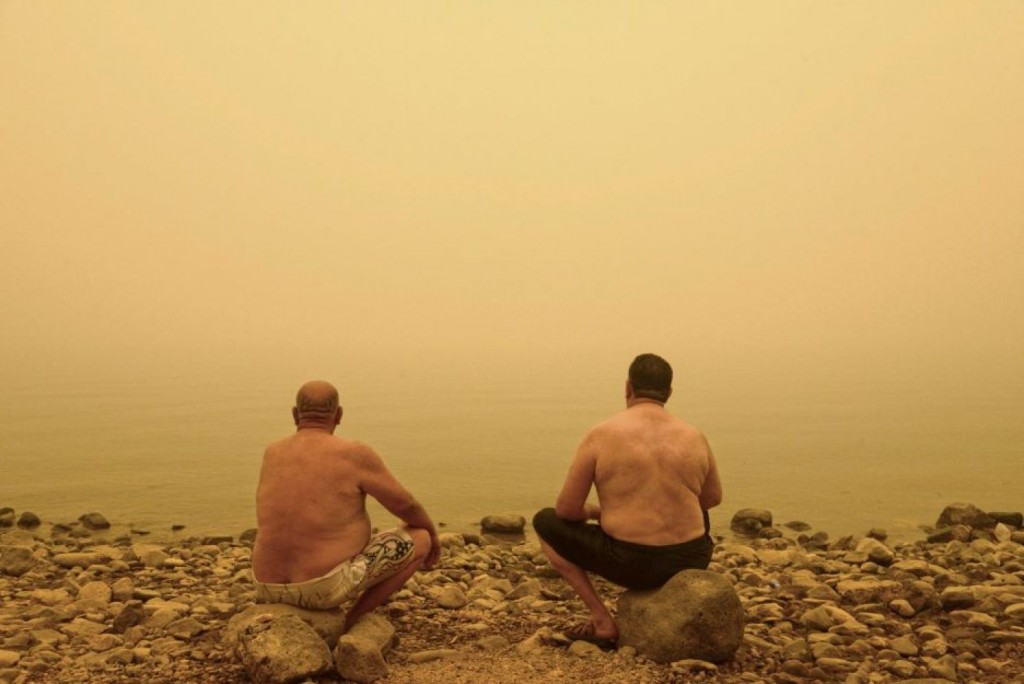 This, I suggest, is what is being specifically described in Job 37 vv15-18. The people are sweltering in their clothes under this south wind, and the land lies hushed under the wind. It’s in this context that the heavens are spread out “strong, and as a molten looking-glass.” Incidentally, it seems possible that vv21ff may describe the sudden change of wind direction and weather when the depression that ends the sharav brings welcome relief.

But to consider the mirror metaphor further. It’s really rather an odd one for a “firmament”, since a palm-sized, thin, flat and circular mirror is, although cast from bronze, scarcely the most obvious thing to compare with a world-sized vaulted dome holding up a cosmic ocean. Surely a bronze shield would have been a more apt picture, of which Israel had plenty? The fact is that the thing one thinks about with mirrors is not materials, or strength but appearance. And this is the appearance one gets with a decently polished bronze mirror: 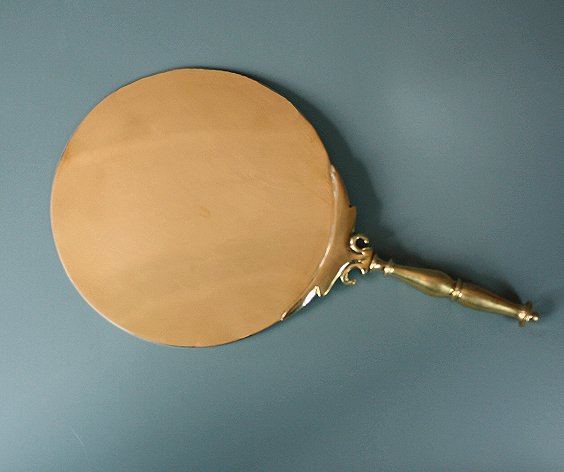 The first thing we see, by comparison with a modern mirror, is that even the colour isn’t like the sky… except that, wonder of wonders, it is remarkably, and uniquely, like the colour of the sky you get during a sharav.

But what about its being “hard”? The word is actually chazaq, which usually means “strong”, being quite commonly used of armies, arms and (once) of a trumpet blast. On a couple of occasions it describes a famine. It never denotes physical hardness.

But on two occasions in Scripture, it’s used to describe a strong wind. Khamsin dust storms have winds up to 140Kmph – and the wind is full of biting dust. That’s a strong sky if ever there was one. Perhaps it’s not coincidental that of the varied words the poet uses for “cloud” in this passage, only v16 uses the word an, meaning thick cloud.

The fact that the heavens are “spread out” using the word-root raqa, related to raqia, says very little: the verb is also used about the earth itself in a few passages, and nobody considers that to be a hard, thin, vault.

So for Job to describe the heavens as a bronze mirror, given the associated clear description of a khamsin or sharav, is a completely accurate phenonomenological description – and not only because the sky itself is a bronze colour. Look at the photo of Gaza, and you’ll see that not just the sky, but the whole city, has a bronze colour cast. And this, of course, would be the most familiar association with the everyday use of mirrors.

The “health drink” Lucozade used to come wrapped in golden cellophane, and from early childhood I have memories of the magic world that could be seen through it when it was removed from the bottle. Do you not think that the ancient “looking glass world” of the common or garden bronze mirror would have had a similar mystique for children then? The mirror people were like us, only back-to-front and yellow! To see that world made real on the uncommon occasion of a duststorm would, surely, immediately make the mirror the go-to metaphor for any poet.

It’s quite hard to find images of faces, still less landscapes, reflected in bronze mirrors nowadays. Fortunately, however, we have at Salford Quays in England an entire building of bronzed mirror glass. I think you’ll see how the heavens of the south wind referred to in Job 17 not only looked like a mirror – they made the whole land look like the reflection in a mirror. 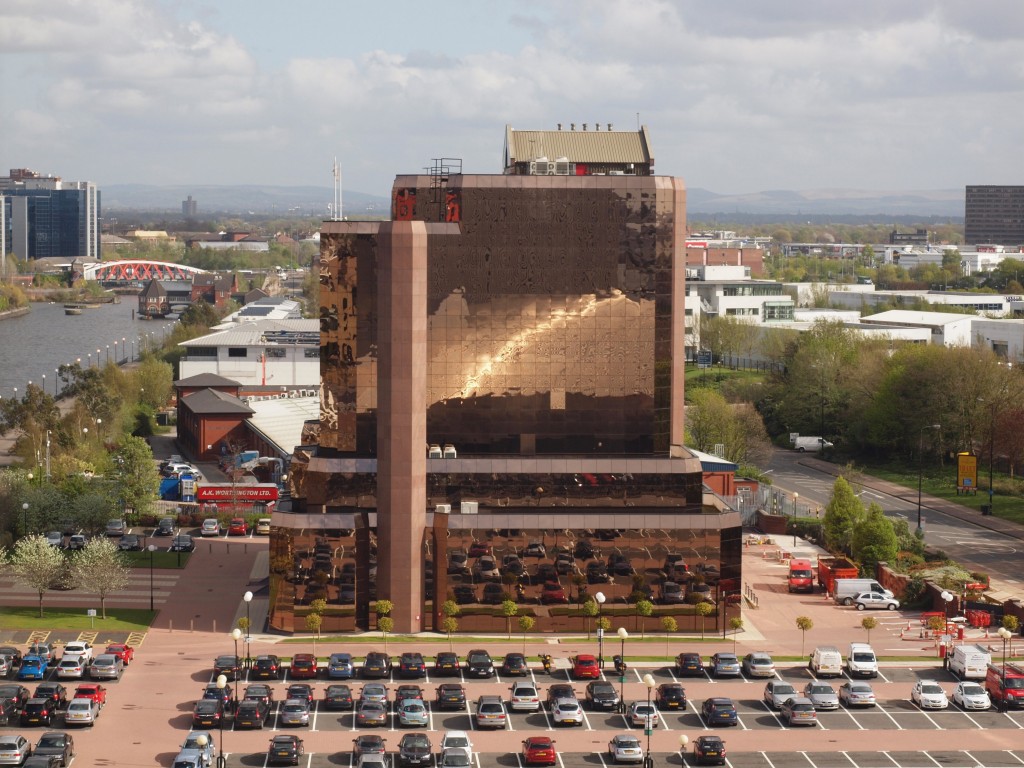 Elihu is absolutely right – Nobody could join God in spreading out a mirror that big!

Now, what was all that tosh about a solid firmament?

2 Responses to Through the looking-glass