How (exactly) science leaves no room for God

On his blog Shadow of Oz, biologist Wayne Rossiter, a principled opponent of theistic evolution, notices a re-posted BioLogos article by, ironically, the editor of Rossiter’s own book critiquing TE, Robin Parry. Rossiter’s post points out the fatuousness of the following argument:

The problem with Intelligent Design (ID) is its tendency to look for God (or simply a ‘designer’) in the gaps of scientific explanations. So-called irreducible complexity, for instance, is seen as evidence of this ‘designer’ because science cannot (in principle, we are told) explain it in terms of natural processes. But if future science did actually explain any alleged instances of irreducible complexity, then such instances would cease to be evidence of the ‘designer.’

The “God of the gaps” argument is, at best, weak at every point, as I’ve pointed out here and here, for example. It relies on theism being, in fact, false, because as well as natural phenomena it skewers every historic element of the Christian faith, including the resurrection, religious experience, and potentially even the second coming (“As a scientist, I will not bow the knee to the returning Christ because, in the course of time, a natural explanation for the transformation of the cosmos I have witnessed might invalidate God’s involvement”). 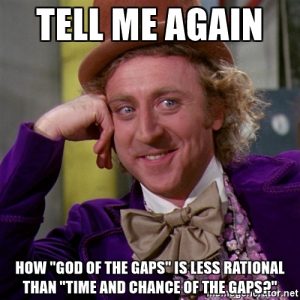 When it comes down to it, if a particular phenomenon attributed to God by someone turns out to have a scientific explanation, all you have done is either confirm that God is behind scientific explanations, or (if you’re skeptical) that he is not behind this particular one. It’s no different from discovering that there was an intelligible process behind some class of events you formerly attributed to chance: explanations are always subject to revision, and randomness, as an explanation, inevitably shrinks with increased knowledge. But try telling that to Monod. Nevertheless, it’s trivially true that finding a case of complexity to be reducible would mean it wasn’t irreducible in that case.

But in this particular paragraph, the form of the argument is more like this: 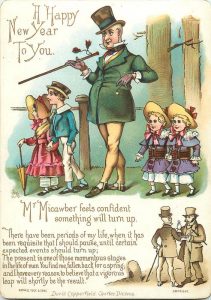 It’s not clear to me why disproving that a particular case of complexity is irreducible would affect the principle that irreducible complexity cannot be attained gradually, or even apply to other cases. But that’s the argument – remember folks, you must never say that black isn’t white, in principle, because one day science might show something black is white. And then where would your principle be? Promissory notes, even from scientists, don’t make the impossible possible.

I’ve just been reading Perry Marshall’s Evolution 2.0, which is a very good overview of the “post-Darwinian” processes of biology that, unless you’re wedded to the superannuated materialist paradigm, strongly suggest that evolution is highly teleological. It was Marshall’s blog that first put me on to James Shapiro’s work several years ago. His position actually makes him skeptical of irreducible complexity, but only on the basis that organisms possessing inherent teleology, and the ability to direct their own genomic changes, aren’t limited to small random variations and natural selection. They are actually designers in their own right.

I suspect that Michael Behe would be quite receptive to that idea, though I grant that the revival of Aristotelian teleology is a shock to moderns of all persuasions; to post-Boyle Christians schooled in the idea that God and man are the only teleological agents in existence, as well as to atheist materialists who don’t even credit people with purpose. And Marshall seems to attribute a great deal of innate intelligence to his teleology: it’s one thing to talk of organisms re-writing their genome in adaptive ways in response to stress. Designing the bacterial flagellum is in another league.

Marshall, however, does hold to at least one biological event that is, in principle, unattainable by natural causes. And that is the origin of the DNA code. His confidence is such that he is offering a $5m prize to anyone who can demonstrate the formation of a true code by purely natural means. That’s if it’s a patentable process (so he can take a cut in applying it to artifical intelligence) – otherwise, it’s just $100K upfront. Apply now!

In fact, unless he’s being tongue-in-cheek, Marshall’s theological position seems to be the usual modern form of semi-deism, as seen in theistic evolution – the kind of God who could get nature to create itself from the Big Bang seems to him to be in some way superior to one who directly interacts with his natural creation, so that’s the way it must be. So he offers the prize, apparently, in earnest that it might be won and make everyone involved a fortune. He theorises on nature like Aristotle, but exploits it like Francis Bacon – an interesting combination! 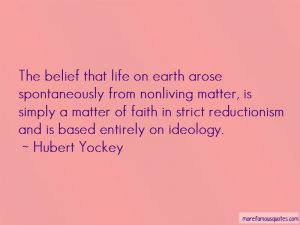 That said, his book is good at pointing out how attempts to explain the origin of the DNA code scientifically have completely failed. The late Hubert Yockey, a pioneer in the study of DNA in terms of information theory and an atheist, simply said that science cannot “in principle” (heard that before?) explain its origin, so we must simply accept it as a brute fact. You can read an understandable account of why what we usually understand as “natural causes” cannot, in principle, produce a semiotic code at biosemiosis.org.

Apart from the old and self-deceptive “promissory note” technique (“science may one day show that the logical impossibility of natural codes is wrong, ergo there is a natural explanation”), the commonest get-out has been to deny that DNA is a code at all, as if that makes explaining it any easier. I beg to differ, having read Yockey and others (including, of course, Francis Crick who first pointed it out).

Another person who disagrees is one of the researchers who has shown most interest in the evolution of the code over the years, Eugene Koonin. I commented on a 2007 paper of his way back, in which he was so overwhelmed by the sheer impossibility of chance producing the DNA code that he seriously posited a multiverse as the only way of making it even conceivable. 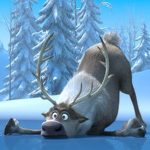 Ten years on, he has recently published another paper, re-examining Francis Crick’s suggestion, 50 years ago, that the code is a “frozen accident”. After discussing the various alternative hypotheses that have been proposed to improve on this (basically) non-explanation, he is able to say that it hasn’t been entirely fruitless. Not entirely:

The falsification of the frozen accident comes in the form of positive evidence of specific evolutionary processes that account for certain aspects of the code evolution. However, none of the three major theories of the code evolution has been fully successful in providing a definitive explanation although each has highlighted important features of the code.

In fact, the paper shows them to be notably unsuccessful explanations, and Koonin’s overall conclusion is that these don’t really change the underlying truth:

Five decades after the publication of Crick’s seminal paper, frozen accident remains alive and well, and a major tenet of our thinking on the evolution of the code. It could be argued that frozen accident is not a theory and not even a hypothetical scenario but rather a meaningless non-explanation of the code origin. Although any detailed discussion on epistemology is beyond the scope of this article, I counter that random and (extremely) rare events are part and parcel of the evolution of life, even if this is unpalatable to some on philosophical grounds.

As Perry Marshall explained to someone who suggested this “biologic accident” scenario “There’s only one problem with that approach: It’s not science.”

It’s an acceptable “accident of the gaps”, then? But actually it’s worse than that: because, as far as information theory goes, for ateological causes to produce a code is in principle impossible, the assertion that it happened accidentally is actually equivalent to saying that a lucky biologic accident made black white.

1 Response to How (exactly) science leaves no room for God