Did you know that the etymology of “etymology” is the Greek etumon = “true”? That’s ironic because one of the basic Exegetical Fallacies Don Carson highlights to preachers in his excellent book of that name is the etymological fallacy. Etymologies often deceive because words, in fact, constantly change their meaning, as I began to discuss in relation to their inherent metaphoric nature here. I’ve recently had a productive offline discussion on the old chestnut of Old Testament cosmology with Reggie O’Donoghue who posts at BioLogos, and I’m glad we found an increasing amount to agree on. One thing I tried to stress is that trying to construct any kind of “Hebrew physical worldview” based on the texts we have, which are largely poetic and always theological, not scientific, is pretty much doomed to mislead.

The point may best be made by looking at words which are considered scientific nowadays, but which without cultural keys could easily be used by a future civilization to construct a very strange idea of “21st century cosmology”.

“Universe”, for example, was the Latin word for “everything there is”, and so we might think that’s what it still means. But back in the early twentieth century, science started to call galaxies “island universes”. Nowadays we have possible multiple universes based on string theory, and parallel universes based on quantum interpretations. Quite how aliens would understand a civilisation for which “absolutely everything” is plural is anybody’s guess.

Mediaeval cosmology is derided for postulating multiple cosmic spheres. But our own “heavens” consist of 5 or 6 layers of “gas” (a word which etymologically derives from “chaos”). We call it collectively the atmosphere, or “vapour globe”, “vapour” being from the Latin for steam or heat. “Scholars have discovered that 21st century man, when he looked up, imagined he saw multiple levels of heavens made of chotic steam, or heat…”

One of the better known levels of these heavens is the “stratosphere”, or “globe of something stretched out” (from Latin sterno/stratum – a blanket, saddle or pavement). Since this “pavement” is immediately above the “life globe” (troposphere) in which we live, it could easily be seen by future scholars to correlate with the biblical raqia, also etymologically meaning “something stretched out”. And not least that would be because it holds up the cryptically-named “chaos levels” of the middle-globe [mesosphere], the going-globe [ionosophere], the heat-globe [thermosphere], and the outer-globe [exosphere]. All terms for future scholars to conjure with! One point where our “mythology” differs from the Hebrew is that one way the stratosphere protects us is by its ozone layer, “ozone” etymologically meaning “smell”. I can’t think of any other culture where the world is protected from chaos by a smell, but etymology can’t lie, can it, by very definition?

Now, you will answer that all these scientific terms are just labels standing for scientific definitions that would make everything clear and correct. But the point is that ancient literature, not being intended as science, contains no such definitions for its own vocabulary, and we’re dependent on linguistic tools, including etymology, that are as likely to make their worldview seem ridiculous as they do ours when employed with a priori assumptions. Even purely scientific terms soon come to be used as metaphors either in colloquial usage (“stratospheric salaries and bonuses”, “there was an atmosphere in the room when I entered”) or within science itself: my watch claims to be “water resistant 3 atmospheres” – would that mean to future scholars “waterproof in 3 of the atmosphere’s heavenly chaos levels”, or to indicate an aberrant belief in 3 separate heavens, or something else?

Let’s turn to a specific example that Reggie raised in corresponence. He cites Ps 89:6:

“For who in the skies above can compare with the LORD? Who is like the LORD among the heavenly beings?”

But, he goes on, the word translated “skies” is shachaq, etymologically “cloud”, suggesting that God and his host dwell in the clouds, which therefore probably occupy the whole heaven (including the realm of astronomical bodies).

But a derivation from “cloud” (or actually, specifically “thin cloud”) need not mean that the word, when used for “skies”, retains any concept of water whatsoever. The English word “sky” derives from Old Norse ský – meaning cloud, just as in our Hebrew example. Its meaning has shifted. It’s not even as if the meaning of “sky” has simply changed – we have developed multiple meanings, including cloud (“a stormy sky”), the far end of the universe (Deep Sky Objects), a medium through which we may travel (Sky-diving), or an ill-defined layer anywhere above us (skyscraper), as well as the blue “something” way above us.

In fact there are a couple of similar instances for Hebrew shachaq, 2 Sam 22:12 and Ps 18:11, both of which speak of “dark waters and thick clouds of the shachaq”, thus showing that “skies” and not “thin cloud” is the meaning (and also, quite incidentally, that “thick clouds” are regarded as “waters”, without reference to a cosmic ocean).Reggie’s problem is neatly solved by being cautious about etymology. But that explanatory sense occurs in just two Hebrew references: many words, having no such instances, may yet fall victim to the predatory etymologist.

It’s harder still, because in a non-scientific text, there is no reason why words must be used in a consistently-defined way even within a single passage. “I uploaded my photographs of the Magellanic Clouds to the Cloud, except for those where clouds obscured the view.” Something like this might explain why it’s so hard to pin down a consistent picture of the Hebrew heavens (shemayim) from Genesis 1. We are told that shemayim (etymologically something heaved up – functionally a cover or shroud, as is suggested for the origin of our word “heaven”) is the proper name for the raqia that separates the upper and lower waters. Whether you think of it as a thin solid sheet, or as the lower air below the clouds, it still remains hard to see how the heavenly bodies are placed “in the firmament” on the fourth day, whilst the planets, at least, retain independent motion and are almost always seen behind the clouds.

But it would be equally hard to construct a modern cosmology from a passage that starts with a dictionary definion of the sky as “the region of the clouds or the upper air; the upper atmosphere of the earth” and then goes on to describe when the sun and moon may be seen in the sky. The key is to realise that the Hebrew language is no less colloquial than the English. Interpret it with care. It may be describing something more familiar than we think. 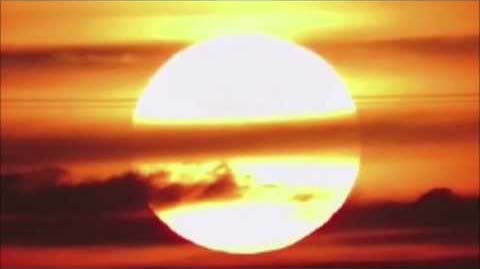 Clouds behind the sun – apparently an iconic argument of flat-earthers! There’s no good evidence that the Hebrews were aware of the phenomenon.