The Lord is not slow

The Lord is not slow in keeping his promise, as some understand slowness. Instead he is patient with you, not wanting anyone to perish, but everyone to come to repentance.

Let’s start with a really basic Christian truth: “No man comes to the Father except by me.” Or from another text, “You see, at just the right time, when we were still powerless, Christ died for the ungodly.”

Now one of the challenging things about the Christian narrative is why, if sin is so deadly and Christ’s work so necessary, the history of salvation seems to unfold so slowly.

Things begin in earnest with Abraham somewhere in the early 2nd millennium BC, but God’s “kingdom of priests” for the world was not called out of Egypt until 400 years later. Israel’s failure to grasp the opportunity fully, ending in exile, developed over another, perhaps, six centuries, and the promised Christ arrived, as we know from Daniel, three world empires after that. And the slow spread of the gospel prior to Jesus’s return, which prompted Peter’s remark at the top of this piece, has run on for another two millennia.

Yet God’s “slowness” may be seen as wisdom, in the unfolding biblical history which, remember, from the start has had a continuous line of faithful people “who call on the name of Yahweh”, with whom we have a spiritual solidarity and who, we may be confident, will like the “witnesses” of Hebrews 11 be included in the salvation of the Christ for whom they hoped, however dimly they perceived him.

Still, even on the most literal, short, time-scale, that’s 6,000 years from the time of the Fall. If we postulate an Adam in some earlier time-frame to match an anthropological assumption (like the “Great Leap Forward” c.30K BP), or a possible genetic bottleneck (looking like 500K minimum on the recent calculations by Joshua Swamidass at Peaceful Science), we end up with a huge number of generations “without Christ and without hope in the world.” And that is no less true if, like many Evolutionary Creationists, you reject a literal Adam altogether, but accept the crucial importance of Christ’s gospel to save people from sin that was with them through their evolutionary heritage.

Assuming, for a moment, that there is a link between this “true mankind” and the cognitive abilities of symbolic thought and apparent ritual concerns, this news article poses another, already half-anticipated problem. 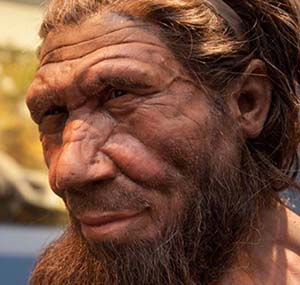 Here are some apparently securely dated cave paintings and symbolic representations from Spain, from around 64,000BP, and therefore well back into the period when only Neanderthal man existed in Europe. The article is not the first to cast doubt on the “bad press” given to Neanderthals over the last century. The conviction that they must be primitive and savage has not only dictated how they have been reconstructed in art and displays, but has even underestimated pretty basic measurements like cranial capacity. To be honest I’m a bit annoyed that I was taught false information on this, by authoritative sources, from an early age, but at least now I know Stephen Jay Gould’s truth that:

We do not encounter facts as data… discovered objectively. All observation is coloured by theory and expectation.

Notice it’s the obervations, not just the conclusions, that depend on our expectations (though note that even conclusions from subjective observations are massively better than opinions based on no observations – science is infinitely better than prejudice!). The ongoing BioLogos thread on bottlenecks demonstrates that, as the new modelling has been done in response to new suggestions about what should be looked for.

But the news about Neanderthals shouldn’t surprise us, for we now know about the interbreeding of H. sapens and H. neanderthalis, which implies at least a degree of shared social outlook. Neanderthal man is looking increasingly on a level with us. Consider it theologically, though. 64,000 years is an awful long time for a race to be living under the penalty of sin and death: in fact, it’s far, far beyond the reach of any cultural, linguistic or religious continuity. From the other side, that of God’s providing the means of salvation, 64,000 years is “slow” as nearly everybody understands slowness. 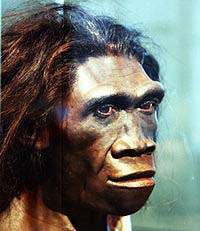 In fact it’s so slow that Neanderthal man had become extinct 40,000 years (or at the very lowest estimate 22,000 years) before even Abraham received his promise from Yahweh. Indeed, we have at least to consider the possibility that we have underestimated the intellectual faculties of our ancestors even more than this, to judge by this article. There is no doubt that the trend is inexorably towards higher estimations, not lower, of the likeness of our forebears to ourselves in any terms we can measure.

What, then, is the answer to the accusation that God let ancient spiritual man fall into sin, and then effectively forgot about him until historical times? We need to look, I think, at the transition from Genesis 1 to Genesis 2, a transition I pointed out recently way back in the thinking of Irenaeus in the second century. That transition comes more sharply into focus as we view recent trends in Evangelical biblical theology, and study the text more carefully. Here I’m reiterating what I’ve said in various posts recently.

Genesis 1 culminates to the creation of man as the ruler of the creatures of the earth, yet living at a distance from God in his heavenly “holy of holies”. But it is a “very good” situation, as God begins his unchallenged reign in the seventh day rest. In Genesis 2, a particular man is called to something new in God’s presence (to Irenaeus meaning the physical presence of the Logos in whose image man was created, and who by that token has a particular affinity with us). Adam is to become ruler, under God, even of the holy angels and, by implication, “all things in heaven and earth”, for nothing is ontologically higher in creation than the angels. Perhaps the breathing of “the breath of life” in Gen 2:7 signifies some special spiritual endowment for that, or perhaps not. But what it does not state is that the man becomes a new biological type, nor even that he receives any new intellectual or cultural endowments.

In other words, under such a scenario, there is absolutely nothing fundamentally surprising if Neanderthal man painted his caves, or even if Homo erectus travelled to Flores by cruise liner. For we find as we build our biblical theology that intimate relationship with the true God, eternal life, and the damage to both through sin are not to do with the old creation, but with the new creation that was always in God’s mind, but only begun in these late (compared to 64,000 years) times.

74 Responses to The Lord is not slow