Genealogical Adam – an observation from Eridu.

As I’ve been studying the overall “shape” of biblical theology, in the light of recent work by Evangelicals like John Sailhamer, Seth Postell and a bunch of others including N T Wright, one of the common themes is that the ancient prophets had a much fuller grasp of the universal scope of salvation – we may even say, in a qualified way, of the gospel – than has been recognised either by older scholarship or “the man in the pew.”

Perhaps my broadest summary of this is here. You’ll see that the concept of a people being called in order to bring blessing to all mankind stretches right back even beyond Abraham, into the early chapters of Genesis, through the strong parallelism between Adam and Israel. When regarded through the lens a biblical theology whose writing was overseen, finally, by the Spirit of Christ (1 Pet 1:11), then Adam, Israel and Christ become more strongly united as parallel figures in a universal divine vision for mankind. More than that, it is a vision (in fact) of an entire new creation, which we see summed up in Revelation at the end of the Bible using the imagery of Genesis 1-3 at the beginning of the Bible.

From another perspective, we begin to see the theme of the whole Bible as the new creation, almost presupposing rather than describing the old. To those accepting an old earth chronology, that is somewhat axiomatic: the events of the entire Bible take place over the last few thousand years of a history of several billion. Those billions are not unimportant to God – but they are subordinate to the intentions of the Holy Scriptures, which are our salvation, not world history as an end in itself.

And so in the text Adam is newly offered living fellowship with God, eternal life and dominion over even the angels in Gen 2 (cf Ps 8), and his failure triggers God’s plan not only to bring salvation from sin and the defeat of evil, but the completion of what Adam failed to achieve, which the prphets and the NT call “the new creation”. This salvation is first enacted through Israel, and then, after Israel’s recapitulation of Adam’s failure, in the work of God himself through the Incarnation of Christ. It’s an epic tale, needing a volume at least to do it justice (we might call that volume “the Bible”, I guess!).

One consequence of this approach is that it makes it more plausible, and even likely, that the writer of Genesis always intended Adam to be viewed not as a man living alone in the world until Eve was created, but as a man taken from, and representing, the existing human race whose creation is merely sketched, like that of the rest of the universe, in Genesis 1. This man would be transformed by his calling into the garden, and by relationship with God, and perhaps by a change in his nature too (though these may amount to the same thing, since to know God is to be transformed). Either way, the specialness of his calling accounts for his need for an equally unique wife.

In another post I explored this in terms of anthropology and the ways peoples, especially ancient peoples, describe humanity. Often their names for “man”, and their myths, speak as if that particular tribe were the only race of men, when it is quite clear that they must have been aware of other human beings. I mentioned in that post the ethnocentricity of ancient Sumerian texts, and that they referred to themselves as “the black-headed people”, and I’d like to expand on that now. 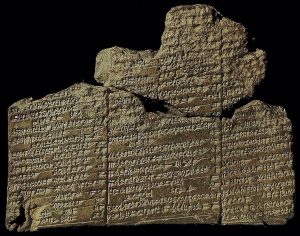 The closest ANE literary parallel to Genesis 1-11 is the so-called Eridu Genesis, taken from a (broken) Sumerian tablet of c1600BC, but thought probably to have been composed c2300BC, making it the earliest known narrative text in the world. It speaks of the creation of mankind (but see below), and after a gap in the text, of the Great Flood that probably dates to around 2800-2900BC. In other words, it is quite likely to preserve a traditional account of the Flood passed down orally since the event (and in all likelihood altered somewhat in the way folk-tales are).

I’m not concerned here with any literary, or even historical, connections between this narrative and Genesis, but only with the facts that (a) it’s close in time and place to the origin of Genesis and (b) it, like Genesis, describes the creation of man by divine beings.

When An, Enlil, Enki, and Ninhursaga
fashioned the dark-headed people,
they had made the small animals that came up from out of the earth
come from the earth in abundance and had let there be, as befits it,
gazelles, wild donkeys, and four-footed beasts in the desert.

Then a large part is lost; “perhaps a story of a failed attempt to build a city,” before it goes on to describe the descent of kingship from heaven, the first cities, and the flood narrative, with King Ziusudra taking the part of Noah.

Now the text, as I have said, is Sumerian, and the Sumerians were the first known immigrants into Mesopotamia, who called themselves “the black-headed people”. But already by 2300 BC, the earliest likely date for the written story, there was another people group in the land, the Semitic (anthropological, not Noahic, sense) Akkadians from Anatolia. In fact, that date marks the height of the power of the Akkadian Empire under Sargon the Great, and the start of the eclipse of Sumerian as a living language. But Akkadian as a language had been spoken, and known in Mesopotamia, for centuries beforehand. And that is self-evident really, because even before the Semitic people began to live alongside the Sumerians, they would have been near neighbours. The Sumerians also are known to have traded for products from the Indus Valley civilization. There has never been a continental people-group that wasn’t aware of their neighbours close at hand, probably waving spears at their borders, and at least of rumours of strangers further afield. And yet the Eridu Genesis speaks of the creation of the “black-headed people”, along with the animals, as if they alone inhabited the earth.

If absence of evidence is not evidence of absence in the case of the Eridu Genesis, then one needs to supply a solid set of reasons why that should not also be the case for the description of creation of adam Genesis 1, or of “Adam” the individual in Genesis 2. Genesis describes how adam was created, as Eridu Genesis describes how saggigga (the black headed people) were created – it does not entail that no others were ever created, nor even that the writer was unaware of any. The silence is a matter of genre, or if it is not, then an explanation that applies to Genesis but not to Eridu Genesis need to be given.

It is generally accepted that there is an etymological link in Hebrew between adam, man, and adamah, “red soil”. Even secular sources agree that this has to do with the creation of man as a tiller of the soil in the Hebrew narrative. Incidentally, whatever the exact link to agriculture is, that makes putting ones Adam back into the mesolithic or palaeolithic problematic: man would have to be created to till the soil, but not actually learn to do so for millennia. Both etymology and the text itself speak of adam as from the soil, for the soil, and returning to the soil.

This much  is seldom disputed. What seems less remarked is that, as far as I know, the words for “man” or “mankind” in other languages, and notably those geographically related to Hebrew, are not derived from the word for soil. I stand to be corrected by any ancient lingusists here, but this etymology appears to be a particular feature of Hebrew, just as “black-headed people” (saggigga) was peculiar to the Sumerians.

The etymology is so closely linked to the narrative of Genesis that it seems likely the story came before the language. And this is by no means impossible, because the Hebrew language arose only after Israel’s settlement in Canaan – if the ancient narratives were handed down through Abraham and the other patriarchs, it was in a language that preceded Hebrew, and helped to form it.

This to me suggests that adam may well have a risen as a specific name for the culture from which Adam came, or of which he was considered the progenitor, which became generalised to the whole of mankind as the Hebrew language developed… and for good reason, if Adam was also the progenitor of an entirely new kind of man, sometimes known nowadays as Homo divinus, whose spread is represented in the Table of Nations of Gen 10. And that spread is unique in ANE literature – no other nation even attempts to show not only the creation of itself, but the dispersal of its seed to form many nations.

If, in this way, adam were originally to be as specific and local a term as saggigga, it does not imply, any more than in the latter case, that it was intended to imply that no other men existed, nor indicate that the writer was unaware of them. The example of the Eridu Genesis is clear evidence that other peoples could, and did, describe the creation of their own races, even with their own fauna, whilst being fully aware that others humans and animals existed in the world.

The bottom line is this: if human universalism is to be found in Genesis (and I believe on several grounds it is, and it is good evidence of the divine origin of Scripture), then the intuition that whoever first composed those early chapters must have been aware of a widepread humanity is probably also an implicit part of the text. It follows that the Hebrew writer probably had some idea of how the problem of Adam’s sin, and the solution of the calling of Israel, came to apply to a worldwide and relatively ancient human race.

Once again, something like the Genealogical Adam hypothesis appears to be implied by Genesis itself.

14 Responses to Genealogical Adam – an observation from Eridu.