When I was doing a home Bible study on the Genesis creation narrative a few weeks ago, one guy asked me, “Who was there to write it down?” I’d not yet explained how to approach the text, so it was a good introduction to that, as well as a good question, and you’ll guess the answer wasn’t “God saw the whole thing,” although he certainly did.

It seems a sound principle that God isn’t teaching us science in Genesis (or in any other part of Scripture), not only because we don’t find it there, nor even because it isn’t a scientific text, but because that doesn’t seem to be how prophetic inspiration works. 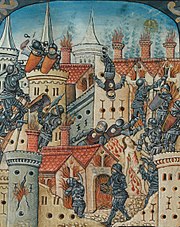 Roman destruction of Jerusalem – as seen from 1504

Take as a good example the “little Apocalypse” of the synoptic gospels, in which Jesus foretells the destruction of Jerusalem along with his own glorification. The old critical scholars assumed these were later compositions put on Jesus’s lips, because predictive prophecy doesn’t actually happen (they said). But more recent, and more careful, scholars showed how, although it’s clearly referring to that 69-70AD destruction, the actual details don’t closely match anything in the blow-by-blow account of Jerusalem’s fall by Josephus, but instead the wording of OT prophetic writings, often about the first fall of Jerusalem under Nebuchadnezzar. That’s so even for the most apparently detailed gospel, Luke. Nothing in the gospels reveals the reading back of an eye-witness report, but the inspiration consisted of something more general than an historical prediction.

Likewise, it appears that the more eschatological the future-events of prophecy, the more likely they are to be couched in symbolic apocalyptic imagery. We can note the same thing about the Messianic prophecies of the OT. In other words, divine prophecy is not like a future newsreel in the prophet’s mind, but something more akin to human insight: a wise man might have seen World War II coming a little in advance, but not its shape. God reveals the future shape of events to his prophets, but not their details.

The same is true for biblical history. I don’t think any of us who believes the Patriarchal narratives to be historical would think that, all memory of them being lost, God dictated their stories to Moses or whoever. No, we assume there was some tradition, even maybe some documentary source, from the Patriarchs, though the selection of events, their theological import and perhaps warranted authorial licence were shaped into what we have in the Bible.

So a high view of Scriptural reliability suggests that they are, whatever else, reliable human testimony. They are history because men remembered well what they had seen, or what was passed down to them. This view of inspiration is commonplace in Gospel studies, where minor differences in detail are willingly assigned to the fact that reliable human testimony always differs on detail. Word-for-word consistency between the accounts would suggest a conspiracy (it actually invalidated testimony in rabbinic law). Total agreement might be compatible with divine dictation as well as conspiracy, but only the naïve expect that.

And so, although it would be quite possible for the Holy Spirit to say to the author of Genesis, “Recite this description of what I saw as I hovered over the deep,” it would be quite out of step with the pattern of the rest of the Bible. And so, I venture to suggest, something like the “temple inauguration” view of Genesis 1 fits the usual prophetic pattern better. The writer is given insight that the creation is a temple built by God, somehow in conformity to the “pattern shown to Moses on the mountain” of the earthly tabernacle. Grasping the meaning and the imagery, the actual “factual” input into the account is simply what he knows by experience of the world around him. And so, in my view, he writes a phenomenological account in terms of temple building imagery. For those who don’t buy the temple inauguration theory, then other models like the framework hypothesis make equal sense of inspiration. Insight, rather than description, is the content of inspiration.

Turning now to the Adam story, I mentioned in a previous post that I’ve been reading C John Collins’ Did Adam and Eve Really Exist? It’s very good on the theological importance of Adam, and perhaps rather sketchy on the various models that have been proposed to place him into real history. Like me, he sees in it a “historical core”, with details being given something of a “mythic” treatment. He allows, therefore, that some details may be for literary or theological effect, rather than describing “exactly what happened.” 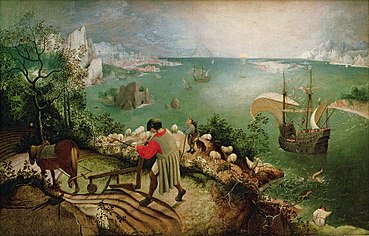 But one facet of this with which I disagree is his contention that those features of the story that tie it to a particular time and place, such as references to farming, cities, and so on, might reflect the author’s much later culture, “historical verisimilitude” of ancient events being quite a recent phenomenon (look, for example, at the way European Old Masters dress classical figures in mediaeval garb, against mediaeval architecture). I agree with the principle, and it is evidence for the true “historicity” of accounts both in the Old and New Testament, because details from patriarchal marriage customs to the frequency of names in the gospels can be assumed to reflect contemporary sources rather than historical reconstruction for the purposes of either historical verisimilitude or deception.

This, of course, leaves it open to Collins to favour the historical core of the Eden account coming from, perhaps, many millennia earlier than its apparent Neolithic or Chalcolithic setting, supporting those who place Adam at the “Great leap forward” of 40,000BP, or at the arrival of “anatomically modern humans”, or (I suppose), at some bottleneck more than 500,000 years ago according to the possibility shown by the recent Swamidass-Buggs work on population genetics. But, I suggest, this is implausible in terms of how inspired biblical history works.

On the grounds stated above, it is unlikely that God would simply inform the inspired writer of an extraordinary series of events before recorded time, whilst unnecessarily including a spurious “modern but ancient” setting. I consider it is not much more likely, as an alternative, that the author would “instinctively” known, as a human being, that there “must” have been an original innocent couple who sinned and introduced human death, and all the rest of the tale followed by gentle inspiration. In any case, given that the Adam narrative is part of a literary unit, he would also have to know “instinctively” of Adam’s son killing his brother, of a polygamous and violent Lamech, of intermarriage between sons of God and daughters of men, of a Flood, and so on. No – these are all contingent and surprising events, remembered, selected and interpreted. And so, therefore, must the story of Adam and Eve be.

The pattern of Scripture is that historical events are remembered historically, and that must apply even to a “historical core” in Genesis 2-3. Our “Moses” must have received some tradition of the momentous events of the “primaeval history” of Gen 1-11. And it’s pretty certain that he did, because there are undoubted literary connections with the Mesopotamian accounts like Atrahasis and the Eridu Genesis. It’s vanishingly unlikely that these derive from an inspired Israelite prophecy, and of course if “Moses” simply borrowed a manufactured myth, we’re simply not considering a “historical core” at all.

Genesis also includes genealogies, of course, and most agree these may miss generations, and perhaps a number of generations. But assuming they’re not fictional (and one main purpose of genealogies is to ground stories in history – see my previous post on Wat Tyler), how many generations can they skip and still serve as genealogies at all? Is my putative descent from Wat Tyler, without mention of any intermediates, even meaningful? And more significantly, I can only skip generations in an account if I have some knowledge of those intervening generations. Excluding “divine dictation”, a genealogy going back many thousands of years, even with massive gaps, would be unprecedented in a literary culture, let alone a pre-literate one.

But Genesis 1-11, from its parallels with Mesopotamian sources, goes back to the very beginning of Near Eastern literature, in the mid 3rd millennium. How long could a folk memory of primordial events have persisted in shifting oral cultures, or even in a determinedly self-contained Yahwist clan?

Tribal memories can certainly persist for centuries. The American who traced my wife’s family-tree (thanks, Steve) found that on three continents there was a tradition that they were originally Huguenots, even though the family surname appears on none of the Huguenot lists. His research found the earliest generation in England living near East Anglian ports, with French given names, at a time Protestants were fleeing here from France and Belgium 400 years ago. The family memory, in this case, seems credible. More credible than my undocumented descent from Wat Tyler, anyway.

Homer seems to have recorded an accurate tradition of at least the bare-bones of the seige of Troy five or six hundred years before. 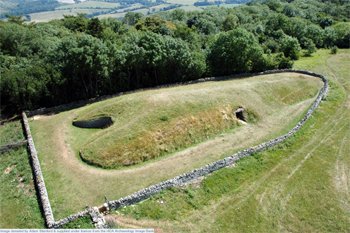 There are theories that Welsh folk tales may recall land lost to the sea around 2,000 years ago, their persistence being the resistance of Welsh speakers to forgetting their ancestral heritage under threat from the English. Also in Britain, Neolithic long barrows seem sometimes to have been formed from buried houses, and stayed in use for a thousand years or more before being deliberately decomissioned. It seems possible they continued to commemorate tribal founders for that long.

There are those who consider ANE flood stories may recall the Black Sea flood of c5,000BC, though the references in the Babylonian stories suggest the tradition comes from river floods closer to 2,900BC, just a few, more plausible, centuries before they were written down. The events could, of course, have been conflated in Mesopotamian legends, as Jack Coillins suggests.

Most extreme of all are Australian aboriginal tales about the Great Barrier Reef being connected to the land, and if that is an accurate interpretation of a genuine event, their origin would be as old as 10,500 years ago. But if so, the circumstances are very special – an isolated, highly traditional culture in which the transmission of “dream time” traditions is the very basis of the culture.

Applying that to Genesis, the very maximum time a folk-memory might persist is around 10,000 years. And that still puts Adam in the Neolithic, no earlier than Göbekli Tepe, even if we stretch it. Remember, the common definition of Young Earth Creationism is about an Adam within the last 10,000 years.

I would say, therefore, that it is utterly inconceivable that any tradition of Eden could have been preserved since the “Great Leap Forward”, or even earlier than that. If it were that powerful a recollection, it would surely be a human universal, like how to make fire. “Ancient Adam” cannot be, surely, a figure remembered by folk-tradition.

Such a very ancient Adam, therefore, seems to me to lie outside history, and could only be the true interpretation of Adam in Genesis (seen as a real individual) on an understanding of inspiration unique to that passage, one that is virtually the equivalent of God dictating the Creation account as a history lesson.

Or a science lesson. 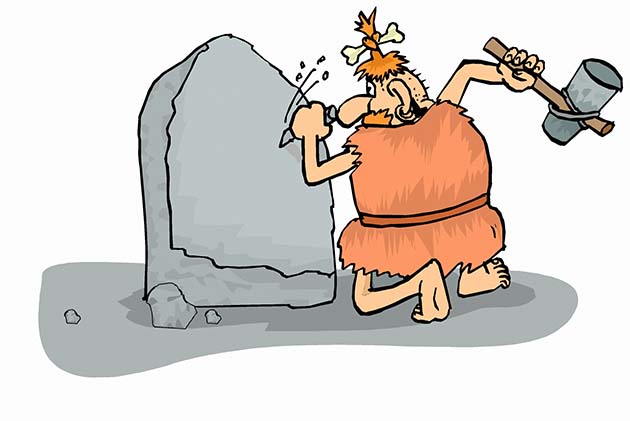 Training in medicine (which was my career), social psychology and theology. Interests in most things, but especially the science-faith interface. The rest of my time, though, is spent writing, playing and recording music.
View all posts by Jon Garvey →
This entry was posted in Adam, Creation, Genealogical Adam, History, Theology. Bookmark the permalink.

7 Responses to Adam and scriptural inspiration