I’ve been suggesting in recent months that the Bible is usefully seen as a story in three parts, the very first of which is about the purpose of God to bring in a new spiritual creation, in which his glory would fill all things, through Adam – a purpose which proved abortive because of the temptation of the serpent and the sin of Adam and Eve. If that’s a reasonable assessment, then the whole of the history of Adam’s race (that is, us) has been a story of exile from a world, and a role, that was glimpsed and then lost, and not simply a story of how natural mankind eventually received a gospel promising paradise. 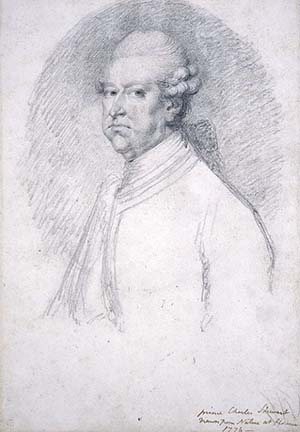 This suggests some intriguing insights into “the human condition,” if we look at historical examples of exile. One such example is the famed “Bonny Prince Charlie” – Charles Edward Stuart, the Young Pretender, who tried to oust the Protestant Hanoverians of Britain and restore a Catholic Stuart monarchy through a rebellion based in Scotland. As anyone with Scottish roots knows, it all ended in a military disaster at the Battle of Culloden.

Only of course, it didn’t end there for Charles, who ended up in exile back in France, and thereafter back in his native Italy. Charles was born in Rome (and died there), to his father James, the Old Pretender, and presumably grew up to the notion of the Divine Right of Kings to Rule, and of the Divine Right of the Stuarts to be those Kings.

And so, on his arrival to lead the revolt, disgruntled Scots rallied round him and he was, for a brief span, a revered hero – until the march south ran out of steam. After Culloden he travelled from hiding place to hiding place inspiring tragic ballads wherever he went, until he safely made it to France… and spent the rest of his life drinking heavily, beating women up and insisting loudly wherever he went that he be treated as royalty – see this account in The Scotsman.

Now neither France nor Italy were bad countries – and they were both Catholic which should have suited him. He had money and royal social connections and could have spent a fruitful life as a wealthy resident. But once a pretender, always a pretender, it seems. It was the bitterness of having his claim to kingship rejected by the people he had hoped to rule that he couldn’t adjust to, and he became a wastrel, profligate and drunk who even tried to murder his wife. He even temporarily converted to Protestantism on a secret trip to London to gain the throne at any price, including – according to the Catholic theology of the time – his eternal soul.

I see our disordered relationship with this world in a similar way. There’s nothing much wrong with this world, God’s first creation, except us. But we seem in some ancestral way to be aware that we were once chosen to be lords of the whole of a new creation, rather than simply rulers of the creatures of earth, and are deeply resentful that we were exiled from that.

That ancestral memory remains, at one end of the scale, in the Promethean spirit of our age that insists against the eveidence that we are masters of all things, and that God is not. At the other, a more wistful sense of loss is seen in the persistent tales of a golden age, or (to reminisce on the hippie era’s self-help spirituality) Joni Mitchell’s lyrics in Woodstock that “we’ve got to get ourselves back to the garden.”

Mankind as an exile is maybe a slightly unfamiliar twist on Christian theology, because we’re apt to think that it’s the people of God who are exiles in a world in which the unredeemed are quite comfortable. In the world, but not of it, and all that. But biblically speaking, there is “exile ” and there is “exile.”

The exile of Israel to Babylon is a direct parallel to that of Adam, and another fruit of the same spirit of rebellion. Yet the prophets had the concept of a remnant, and in some cases that remnant was identified as those who had actually suffered deportation to Babylon, rather than those spared. Jeremiah (29:5ff) told them to build houses, settle down, and live quietly as God’s people until the time came for their restoration. Although some did return, in dribs and drabs, 70 years later, theologically Israel remained in exile (see Neh 9:36), and the subsequent history suggests a majority behaved like Sozzled Prince Charlie, filled with violence against each other and insisting to their occupiers that they had inalienable rights to the land. As many of the rabbis still conclude, it was that which led to the final disasters of AD 69-70 and 130.

Meanwhile, though, Isaiah’s faithful remnant waited patiently on God to end their exile, a classic expression being Mary’s Magnificat in Lk 1:46-55. That attitude also characterised other “wanderers” in Israel’s history, imcluding paradigmatically Abraham, called to a new land in hope, and yet never allowed actual ownership of any square foot of it, other than his tomb.

That kind of attitude, perhaps, is what the New Testament speaks of in respect of the Christian’s relationship to the world. Like Abraham, we are called to the new creation, and have a firm downpayment on it in the glorification of Christ, and in the Holy Spirit. And yet we are still dwellers in the Old Creation, knowing like all Adam’s children the sense of exile from something we once almost grasped.

But it’s a good world – indeed it’s our birthplace. We’re in a position to enjoy all it offers us peaceably, rather than resent its constraints and enter the old cycle of depravity exemplified by Charles Edward Stuart. It’s helped, in our case, by knowing that there is no futile rebellion feeding our hopes, but an assured victory won by other means, on the cross – a victory not only over the present usurped government of the world, but against our own complicity in it. To quote the late Larry Norman:

I’m happy now, but when this good life ends
I know a better life begins.

Training in medicine (which was my career), social psychology and theology. Interests in most things, but especially the science-faith interface. The rest of my time, though, is spent writing, playing and recording music.
View all posts by Jon Garvey →
This entry was posted in Creation, Genealogical Adam, Theology. Bookmark the permalink.