Another loose end on sequential Genesis 1-2

Does Genesis 2 follow on, or expand on, Genesis 1? I believe the former, and it was discussed a while ago at Peaceful Science, my own most recent argument being here.

In fact one atheist at Peaceful Science opted for the third alternative, beloved of holders of the documentary hypothesis since Victorian times – that they are just separate, incompatible stories. Maybe I should just deal with that first, before the meat of this post.

One thing that has struck the Old Testament studies guild with a shock over the last couple of decades is what everyone else already knew – that Genesis is a book, not an cut-and-paste of sources. And when you use sources for a book, you use them in ways that will enhance the story you want to tell, provided you are a conscientious author. The writer of Genesis wove these early chapters together (and the later ones too) so tightly that even the number of uses of individual words were included in the compositional plan. The chapters are, without doubt, intended to fit together, and the question is how.

My own conclusion, as I’ve said before, is that the creation narrative, speaking in terms of story, is the backdrop in which the events are set. The drama of the narrative begins in chapter 2, as God begins to unfold a new plan within his existing creation. Richard Middleton, in The Liberating Image, quotes Walter Brueggemann saying that Gen 1:

…is the presupposition for everything that follows in the Bible.

He also quotes Francis Watson, that it:

…must determine the theme and scope of the story that follows. The “beginning” referred to at the outset is also the beginning of a book, and engenders in the reader’s mind the expectation … of a coherent plot.

To that effect (and even before I read Middleton) I concluded that the lack of any aspect of real narrative in ch1 – that is, everything simply happens at God’s command – gives the chapter the narrative role (despite its many important theological themes) of the introduction to a folk tale. The example I gave was “There was once a king who lived in a deep forest…”, inviting us to ask, “Well, what did he do, and what happened to him?” Chapter 2, I maintain, tells us.

Middleton also notes the lack of drama in the creation account, citing various scholars including Brueggemann again, to show primarily the unopposed ease of God’s creation, concluding that this is:

…reflected even in the gentle, repetitive cadences of the text, which progressively builds to a climax, but unlike a genuine narrative contains not a trace of plot tension or resolution (that is, there is no evil to be resisted or overcome).

But this is where it becomes problematic to consider Genesis 2:4ff as a restatement or expansion of Genesis 1-2:3. For the climax of the creation account is the sabbath rest of God on the seventh day, as, having finished his work of creation, he enjoys his reign within it, just as King David, once he had subdued all his enemies, is said to have rested. So in a text already free of narrative tension, the climax is the completion of the “very good” creation, and God’s rest within it.

The contrast with chapter 2 is profound, not only because of the differences in the details of Adam’s formation, his removal to a sacred space, the separate creation of Eve and so on, but because all these things form the beginning of a drama in which God’s rule is disrupted by the onset of sin. This catastrophe is, of course, the “dramatic tension” that persists throughout both Old and New Testaments, and is only finally resolved by the second coming of Jesus, the final defeat of his enemies, and the consummation of the new creation.

But even apart from the Fall, the whole thrust of the narrative is of a new work in progress. Whilst Genesis 1 commissions mankind to rule and subdue the earth – a future yet to be fulfilled by the end of the creation account – the Eden story opens up a whole new range of open endedness. Adam and Eve are placed in a garden – will they stay there, and if so how can they fill the whole earth? Will they have children? Are they to be clothed (as Greg Beale suggests) with some royal or priestly garments for their long-term rule? The tree of knowledge is forbidden them, but wisdom must be given them to rule – how? The tree of eternal life is available, but apparently not availed.

All these new elements culminate, of course, in a disastrous way, and we never find out how they were intended to develop (leaving aside God’s foreknowledge and secret counsels). And they do so at an early stage of the narrative – not necessarily as early as the 6pm on the day they were made that Irenaeus supposed, but certainly before the birth of the first offspring of the primordial couple.

So how can these events be mapped to the creation account? It surely can’t be argued that it all occurred on Day 6, before God took up his rest and pronounced everything very good (apart from the small matter of a creation reduced to vanity!). And if it happened on the seventh day, then God’s sabbath rest was extremely shortlived… and also, Adam and Eve were created after the mankind of Day 6, That affirms those of us who support Genealogical Adam tend to claim, but not a non-sequential reading. Put in simply human terms, if the accounts are overlapping, no sooner had God seated himself on his throne than he was off it again, to begin to sort out the mess that Adam, Eve and the serpent had made of the divinely ordained cosmic order.

The only solution I can think of is to make of the creation account a kind of gap theory, ie that the sabbath rest of God refers exclusively to the eschatological hope, and that between 2:1, when the heavens and the earth were completed and deemed very good by their maker, and 2:2, when he rested from his work, lies the entire sorry history of humanity described by the rest of the Bible, unmentioned. There is, needless to say, no narrative sense in this blatant contradiction of what follows.

Better, to me, to see everything from 2:4 onwards as a new work of God – his decision to bring in a new creation. Greg Beale (A New Testament Biblical Theology) takes the new creation as the controlling theme of the whole biblical narrative, though I’d wish to emphasize even more than he seems to that this was “intended” to occur right back in the garden of Eden, thus forming the interpretive key to the whole content of Scripture from then on.

The effect of this understanding is to allow Genesis 1:1-2:3 to be read, naturally, as describing a first creation that was entirely successful in its own terms, in which God did, indeed, reign unopposed by any enemies as described. It even contained “natural” mankind, living with a natural sense of God, as it were in the outer court of the cosmic temple, but without the intimate fellowship of Eden which made possible the co-regency of the cosmos, and eternal life – and, sadly, the possibility of trangression and divine enmity. This first creation was not the creation in which, through rational and spiritual mankind, God would come to fill all things with his glory – that was the second, new, creation whose story the rest of the Bible is concerned to tell.

Because of the early sabotage of this new creation, the biblical narrative becomes the story of redemption, and of salvation history – and, of course, of Jesus who achieves the redemption of mankind and the transformation of creation long ago planned. Although the Bible has lessons to teach us about the old creation, in which we live until Christ is completed in it and in us, that is not its primary subject matter.

But we know about that first creation from the study of nature, and about its immensely long history from the studies of science. It can scarcely be termed a failure, or a waste, if God reigned over the heavens on his sabbath throne for 12 billion years, and over the earth for its 4½ billion year existence. Genesis 1 may be brief – but when treated sequentially, it points to its own particular glory, the backdrop against which the real divine drama plays out in human history. 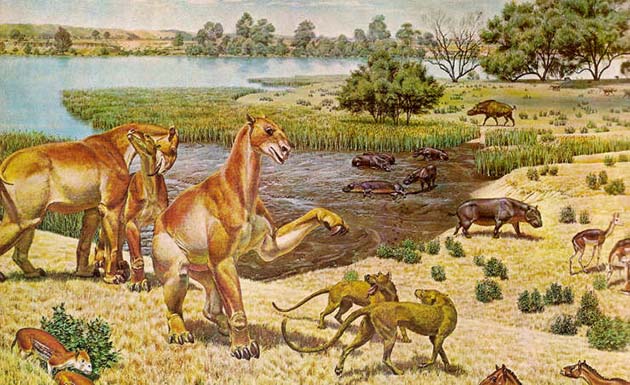