The environmental message of God’s Good Earth is, in my own eyes, rather muted. Conservation was, after all, a subsidiary theme of the book, though I was pleased that Sir Ghillean Prance, in his endorsement, saw it as a demand for positive action.

The need for that positive action was shown by the recent article in Biological Conservation, a metanalysis of articles about the decline in insect species across the world. It wasn’t just the report itself that gives grave cause for concern, but the way it was reported.

Note that on the linked website, it is tucked away under the niche-interest of “Science.” Where I heard about it, on the main BBC Radio 4 news, it was given a slot just before 7:30am. The paper’s author was interviewed, and he described both the crucial roles of insects in the whole biosphere, and the alarming statistics that 33% of insect species are currently endangered, and that 40% of insect species may become extinct over the next few decades.

After three minutes or so he’d just got round to mentioning that it is thought that 10% of insect species have already recently become extinct, when the interviewer interrupted him, saying “I’m afraid that’s all we have time for now.” Well, they’d spent the usual fifteen minutes on the non-news on Brexit, President Trump’s latest comedy routine, and so on, so what vital information needed to be imparted to the nation, that justified curtailing an explanation of the silent loss of (effectively) 10% of the world’s animal species?

It reminded me of an ancient TV sketch by Michael Bentine in which, as a newsreader, he announced the breaking news of an alien invasion, describing how flying saucers had destroyed Manchester, and an army of robots was now advancing on London, annihilating everything in its path. He promised that the BBC would keep information going out as long as possible, then changed his tone, and announced, “And now, cricket…”

There has to be something wrong in the education of a BBC news anchor who, when told by a scientist that a tenth of insect species has become extinct, does not register the slightest alarm, or even interest, or wish to do anything more than make sure the sports news goes out on time. Maybe she just doesn’t like creepy-crawlies. 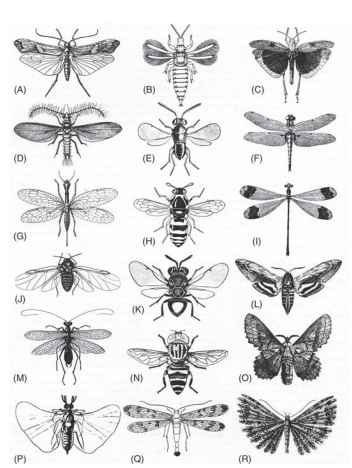 But remember that the catastrophe in our natural world has arisen, very largely, because the whole world came to see humanity as in a bloody competition against opponent species out to get us. Unless, that is, we couold beat them to the punch, and get them first. God’s Good Earth describes the possible origin of the idea of nature as evil in and after the Renaissance. I’ve also blogged on the more-or-less simultaneous efforts to destroy Bristih wildlife systematically.

The effectiveness of the campaign against an inimical nature came only through Baconian science, with its determination that man should be sole master of the world. That was what fed the Enlightenment project, through the obvious efforts to tame the world for man (or at least Leader Man) in the Industrial Revolution. We need to think of this not only in terms of factories and railways, but in a host of major, but less obvious, modifications of the world in the belief that we humans know best. Extensive land drainage schemes increased agricultural yields, for example, but destroyed vital habitats in the process. The scientific industrialisation of warfare has had huge effects too, when that allows total war – nuclear weapons on Japan (and in atmospheric tests), defoliants in Vietnam, the drainage of swamps in Iraq, the sinking of millions of tons of toxic shipping, and so on, and so on.

DDT was banned because it was found to endanger people and livestock – not because it killed key insects indiscriminately. And the pesticides used in combination with genetic modification of crops are not particularly discriminating either, just as the mantra that the only good bacterium is a dead bacterium has only recently begun to give way to the realization that we have created many intractable diseases by treating microorganisms as nature’s (or God’s) mistakes.

I need not remind you that the replacement of creation with evolution by survival of the fittest (or, in Darwin’s preferred terms, the “struggle for existence,” turned that competition principle into a religious creed. The whole of the cosmos, we all chanted, exists only because of differential reproduction and survival. This is the law of the jungle, and we must live by it or die by it. But actually, it’s a creed, not a law.

Do you really think the only way to bring about the peace
Is to sacrifice your children and kill all your enemies?

That was in the context of the Vietnam War, but the same attitude has long been entrenched in our attitude to creation, and in the applied science that has made that attitude so devastatingly effective as to put 4 billion years of natural harmony in immediate jeopardy. We have to learn to live in balance with our “enemies,” which boils down to the old Genesis 1 principle – misinterpreted to deadly effect by early modern intellectuals – that we are stewards of all that God has created here on earth, not despots over it.

The theological message of God’s Good Earth matters here. If we allow ourselves to believe that Satan, or evolution, or some other Demiurge, was responsible for whatever does not suit us in the world – whether that be viruses, bacteria or, of course, nasty pestiferous insects – we can only see ourselves as heroes for waging war on it.

In that case, of course, it will seem jolly unfair of God to let the planet be destroyed despite our noble efforts. Only actually, it was destroyed because of them, because as Adam and Eve found, it is the fear of the Lord that is the beginning of (true) wisdom.