When I was a medical student, I got to meet the wife of one of my then-favourite Sci-Fi writers, James Blish, after she’d had a minor accident on a London bus. This was around the time of the author’s declining health, so it must have been a particularly stressful time for Mrs Blish.

Blish was an excellent author, most noted at the time for his Cities in Flight 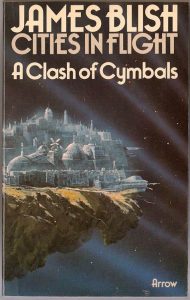 series, in which US cities such as Scranton, equipped with anti-gravity and life support, actually became interplanetary spaceships. The stories spanned several centuries, and this was the one point that rankled with me as a kid. For the mayor and city fathers (our wise heroes), were alone among the citizens granted virtual immortality by virtue of high technology, to go along with the virtual immortality of their rule of the city. Stepping back from the fantasy, who really wants an unelected government that can’t be voted out? Do our leaders really always know best?

This rather tricky problem of ordinary people’s unsuitability to govern themselves seems to be a hidden feature of all utopias: certainly it has proved the hallmark of Communist regimes from Russia and China to North Korea.

Back in 2012 I noted a similar phenomenon in the 1930s film of H G Wells’s Things to Come, in which the technocracy (pictured as the good guys!) spending huge sums on a space gun to reach the moon, acquiesce in the immolation of a Luddite crowd of ‘oi polloi seeking to destroy it. Given the choice between progress or chaos, the wise oligarchs could decide unilaterally what was good for the people, even if it meant killing them.

Since I mentioned it recently, Bacon’s New Atlantis is similarly oligarchic, though Bacon seems as unaware of the problem as Blish or Wells were. The self-perpetuating scientific élite of Salomon’s House, who benevolently pass their discovereies on to the grateful masses – or withhold them as they see fit – are simply assumed to be both endlessly virtuous and intellectually infallible. The ordinary people, and even the king, are in Bacon’s thought merely consumers of the society created by the all-wise few. 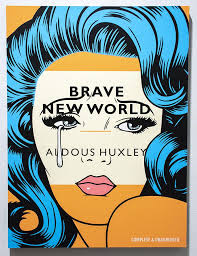 I’m just re-reading Aldous Huxley’s 1932 Brave New World, which was almost certainly partly inspired by the US Technocracy Movement (forgotten now, but look it up), and which was definitely a riposte to Wells. The book (and Huxley’s preface to the 1946 edition) has surprising resonances with today’s situation, first in the reasons totalitarian government was imposed on the masses to begin with (perceived ecological and political chaos, and its perceived causes such as individual liberty, family and religion, specifically Christianity).

But the remedies imposed in Huxley’s brave new world in order to make the people complicit, and happy to be so, were prescient too: the proliferation of mindless entertainment and, especially, sexual disinhibition; the separation of procreation from family, leading to the abolition of the latter; recreational drug use as a social norm; consumerism as a virtue; and test-tube to grave social conditioning by propaganda, in the name of education, to ensure that all the valueless values of this new society were thoroughly internalised by all. Along with this went the deliberate eclipsing of all former culture (Shakepeare being the private pornography of the controllers – funny how this week some academic was calling for Shakespeare to be replaced in schools by “better writers”), and terms like “parent” or “marriage” being considered smutty. And, of course, there were well-hidden but draconian sanctions for aberrant thinkers.

It is less known that Huxley wrote Brave New World Revisited in 1958, in which he concluded that western society was well along the way towards his original vision, dated though it was in detail.

Once again, in Huxley’s utopia (which is actually a dreadful dystopia) the few who “know” have imposed their own vision for the world on the many, who are regarded as sheep, if not vermin. Their aim is social stability, but that can only arise, in their view, by control. And the people must not realise they are controlled until they have been conditioned to love the fact.

Huxley’s insight into effective propaganda is very relevant to today: he says it is at its most effective when it doesn’t do something. That is, as he says in the 1946 preface:

Great is the truth, but still greater, from a practical point of view, is silence about truth. By simply not mentioning certain subjects, by lowering what Mr Churchill calls an “iron curtain” between the masses and such facts or arguments as the local political bosses regard as undesirable, totalitarian propagandists have influenced opinion much more effectively than they could have done by the most eloquent denunciations, the most compelling of logical rebuttals.

So, for example, to deal with popular dissent with the political status quo across the western world, the best strategy is simply not to report election results, whilst murmuring darkly about the dangers to us all of “far right groups.”

Likewise, it seems to me there is a reason why climate change is sold by glossy films and orchestrated mass-demonstrations, in which teenagers urge “Listen to the scientists!!” without, somehow, encouraging people to follow links to the actual datasets and the primary scientific literature. A pull quote from a political policy report (and the exile to Iceland of dissenting researchers) keeps our minds focused on what the conjuror intends us to see.

I recommend that you read Huxley, if you’ve never done so. Let me end with another quote from the preface he wrote before the experience of the Cold War and the “interesting” society we inhabit now, poised on the brink of an alleged catastrophe whose existence we can only take on trust, but which requires a whole new world economic and social order, according to influential bodies like the UN or Theelders.org.

Indeed, unless we choose to decentralize and to use applied science, not as the end to which human beings are to be made the means, but as the means to producing a race of free individuals, we have only two alternatives to choose from: either a number of national, militarized totalitarianisms, having their root in the terror of the atomic bomb and as their consequence the destruction of civilization…; or else one supra-national totalitarianism, called into existence by the social chaos resulting from rapid technological progress… and developing, under the need for efficiency and stability, into the welfare-tyranny of Utopia. You pays your money and you takes your choice.