Where the bee doesn’t suck…

Longstanding (and longsuffering) readers may remember that I often like to delve in the story of any interesting new species I come across, and I virtually always find that they are exceptions to the evolutionary rules. The most recent is this handsome plant that has appeared, apparently for the first time, in my ongoing wildflower meadow project. 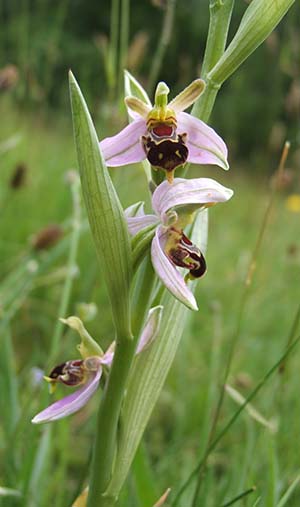 It’s the third species of orchid that’s cropped up since I started the meadow, and is the Bee Orchid, Ophrys apifera. It’s interesting first in that there are five plants so far, in a small area, suggesting I missed one that seeded last year. My field guide mentions its resemblance to a bee visiting the flower, but I was not surprised when the wildlifetrusts.org website explained, “Males fly in to try to mate with it and end up pollinating the flower.” It looks like one of those super-evolved insect mimics, doesn’t it? But then, tantalisingly, the description went on, “Sadly, the right bee species doesn’t live here, so this orchid is self-pollinated in the UK.”

It turns out that what Wikipedia says

…was actually one of Charles Darwin’s evolutionary conundrums (it’s good to acknowledge how honest Darwin was in airing problems for his theory whenever he came across them). For the only species observed to engage in “pseudocopulation” with the Bee Orchid is the solitary bee Eucera longicornis, which only lives in the Mediterranean area. To Darwin, the fact that the orchid is able to self-pollinate – and has to do so across much of its range – contradicted the high degree of adaptation by natural selection and, presumably, co-evolution with the bee species.

In fact the orchid produces a pheromone that attracts two other (southern) species as well (but only E. longus copulates), yet,

While O. apifera represents a very specialized pollination system, pollinia removal observations suggest an upper-bound estimate of outcrossing at 8% (Darwin 1877), and the predominant mode of pollination corresponds to the caudicles of the pollinia bending into the stigma, effecting autonomous self-pollination.

This last bit is also quite clever, mind – as the flower ages, if it is unpollinated the caudicles dry out and so bend down to self-pollinate the flower. Neat, huh? But it rather gives the lie to the Wikipedia article on the genus Ophrys which says:

Every Ophrys orchid has its own pollinator insect and is completely dependent on this species for its survival.

The Bee Orchid is an example in the genus, apparently not at all untypical, which attracts 3 species, induces copulation in one, and needs none, in its northen populations at least. One source told me that self-pollination results in many local variations, but that doesn’t seem to have caused any permanent loss of reproductive success, judging by the five specimens in my field. And so the story that, perhaps, most of us take as a Darwinian poster-child about the evolution of orchids to match insect species is, at least, a whole lot more complex than that.

The paper I cited above does a good job of assuaging Darwin’s doubts by suggesting how selection could have favoured both occasional pseudocopulation (and pheromone production) and self-pollination. But at that point it ceases to be a simple adaptive story and becomes (to be honest) a Just-So Story. A clearly adapting to B is persuasive: the more extraneous adaptive processes are then added in, the more it just becomes one of many possible explanations, rather than science.

But life is even more complicated than that. Scientists have studied whether making love to orchids might be selectively disadvantageous to the bees, too exhausted (or disillusioned?) to seek out real females. A study cited here suggests that they too have a reproductive fall-back:

Further investigation of roughly 200 insect species that are fooled into having sex with orchids revealed that more than 90 percent of these dupes have females that can still produce offspring even without sperm from males.

Orchids can self fertilise; bees can practice parthenogenesis – so what’s all this monkey business going on on the side?

The Bee Orchid’s appearance in The Camel’s Eyrie by self pollination is even more surprising because Ophrys has another trick up its sleeve:

Most Ophrys orchids are dependent on symbiotic fungi. Transplanting specimens, especially wild specimens, is difficult, sometimes impossible, due to this symbiosis unless a large amount of surrounding earth is also taken with the plant.

Unless seeds and fungus have been dormant in my field since it was last a meadow, many decades ago, the first seed presumably came in via a visiting bird or mammal last year, and not with a clump of fungus-friendly earth. So there’s another biological truth to which, apparently, my little plants are an exception.

But let me, heavily tongue in cheek, suggest another just so story to explain the appearance and habits of my Bee Orchids, based on a genuinely astonishing piece of science I heard on BBC’s Springwatch last week, courtesy of presenter Chris Packham. It appears that biologists in Israel have demonstrated that when a particular bee simply flies past an evening primrose flower, it rapidly produces an extra sugar-rich nectar to entice the insect in to feed. This apparently works using recordings of the particular bee in question, but not with other sounds.

With what organ the plant senses the sound, and how its response is mediated, I have no idea, but it does show what jolly clever chaps these flowering plants were all along, without our noticing (so no doubt some vegan environmentalist will soon tells us that even veg is murder!). But that finding opens up the vista for an entirely non-Darwinian view of insect mimicry in orchids, does it not?

Instead of random mutations and selection unaccountably resulting in an insect-like  appearance sufficient to to fool male bees, we could postulate that the orchid uses its as yet undiscovered visual organs to get the measure of potential pollinators as they fly by, and then uses its Hox sketchbox to produce a working facsimile. Prove me wrong! There’s certainly something going on with orchids and mimicry.

Not that either the veggie-eyes or the Hox sketchbook are quite as accurate as we may assume (or the selective process, if we stick with that more boring, conventional mechanism!). I fished out a picture of the particular bee for which Ophrys apifera is a sex-toy, and I present it below as an identity parade. Which bee would fool you into mating with the flower I illustrated at the top of the column? 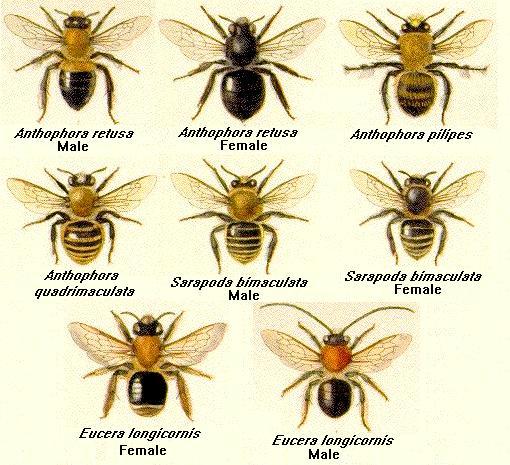 In fact the disappointed female is at bottom left, and I have to say that whilst my orchid is perhaps prettier, it’s scarcely a brilliant likeness, so perhaps the orchid’s visual sense-organ is rather long-sighted. And the male bee’s.

However, fortunately another member of the same genus appears to have been working on this very problem during evolution. Meet Ophrys biscatella, the Spectacled Orchid! 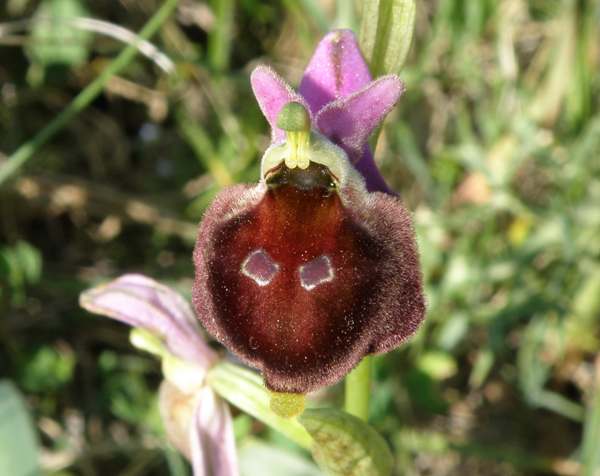