Monsieur Perrotin has also secured some valuable observations which may be regarded as having finally set at rest certain points in the physical geography of Mars which have long been in dispute. It is now many years since the distinguished Italian astronomer Professor Schiaparelli announced that the continents of Mars were in many places traversed from coast to coast by long straight streaks. From the analogy suggested by their appearance he designated these objects as canals. It may illustrate the difficulty and the delicacy of such observations when we add that certain other astronomers of acknowledged skill, and provided with excellent instruments, have not succeeded in detecting these remarkable features. Perrotin, however, adds the weight of his high authority to confirm the observation of Schiaparelli. He says that although at the time he made his observation the conditions were not quite as favourable as might be desired for the examination of some of the canals, yet certain of them were wholly unmistakeable, and in alluding to the controversy, he adds, that some of these were so easy to recognise that even the most prejudiced observer must have been convinced…

These canals, which were discovered by Schiaparelli and whose existence was confirmed by Perrotin have also been studied by Mr Percival Lowell. Each winter of that planets sees, as I have explained, the accumulation of a cap of ice and snow around the correpsonding Pole. In the course of the ensuing summer that icy mass, or at any rate a very great portion of it, is restored to the form of water. Mr Lowell has detected around the Poles of Mars what he believes to be the masses of water that have thus been accumulated.

We have seen that the great extended dark areas of Mars behave as though covered with vegetation, which makes it very probable that one form of life exists there… Also, the melting of polar snows and the absence of ice in the temperate and equatorial regions proves that the temperature is not too low to support living things, since animals well known to Man exist quite well in the cold of up to -72 degrees in Eastern Siberia… Therefore, the atmosphere does not appear to be too rarefied for living things such as vegetation… If, then, we consider also life’s marvellous power of adaptation, one of the aims of the Creator of the Universe, we can see that the presence of animals or even human beings on Mars is far from impossible. This was the view held by Flammarion, Schiaparelli, Moulton and others. However, it seems that advanced life must have been confined to the past, when there was more water on Mars than there is now; today, we can expect nothing more than vegetation around the vast wilderness of the planet.

Martian landscapes change colour with the seasons, showing brown in winter, green in summer. Possibly simple plant forms, such as lichens, do grow on Mars.

From Patrick Moore, The Boys Book of Astronomy, London: Burke, 1958:

As a polar cap melts in the Martian spring and early summer, the dark patches nearer the equator seem to become more conspicuous, and to show changes of colour. One theory is that these patches are made up of plants, which have to wait for the arrival of moisture fromn the melting caps before they can develop. So far there is no proof, but if you asked the average astronomer whether vegetaion exists on Mars he woiuld probably say, “Well, I think so.”…

Most people have heard of the canals of Mars, strange streaks across the deserts which were once thought to be artifical waterways. Percival Lowell, an American astronomer who died in 1916, charted over 800 of them, and thought that they had been built by Martian engineers to carry water from the polar ice-caps through to the dry regions near the equator. Nowadays it is believed that the canals are no means as straight or regular as Lowell drew them, and that if they exist at all they are natural features made up of the same material as that of the dark areas.

In this sequence of quotes, we see over the first half of the 20th century the major astronomical consensus that macroscopic life was widespread on Mars. The firm belief in canals certainly diminishes over time – I’ve done Antoniadi a disservice by not showing his book’s significant debunking of the interpretation of observations showing canals, in which he himself had believed. Still, even a decade later, in 1939, Earl Slipher at Lowell Observatory, photographing Mars in opposition, saw “many” canals, whereas George Hale at Mt Wilson simultaneously saw none.

A group of 500 international scientists, including a good number of climate scientists and (by my count) 6 IPCC peer-reviewers, has just placed a statement in the public domain, accompanied by an open letter to the UN seeking to counter the less scientifically based message delivered by the climate expert Greta Thunberg at the same conference. You will note that the “public domain” seems not to include a single one of the main-stream news media which gave blanket-coverage to Thunberg, although they were all sent press releases about it.

This echoes the lack of press response back in 1997 and 2008 to the Petition Campaign signed by over 31,000 US scientists and science graduates stating a contrarian view on the “97% consenus” story of anthropogenic climate change.

What is most significant to me is the contrast between the climate issue and the life on Mars issue of last century. Rather than being about deep issues such as the theoretical robustness and testability of climate models, or about the continuing complete uncertainty over feedback mechanisms (although there is also a big story on the quality, and alteration, of datasets), the debate on Martian canals and vegetation, especially the former, was about some scientists firmly saying, like Galileo, “I have seen what is there,” and others, like his opponents, saying “Your lying eyes are deceiving you.”

And yet although the difference, as H. G. Wells and a host of other Sci-Fi writers observed, might mean the difference between preparing for a Martian invasion or just classifying extraterrestrial lichens, both sides were treated as legitimate scientists. That, as I have found these last few months, is decidedly not how it is with the politically – and increasingly religiously – charged climate issue. (I was going to say “debate”, but that would indicate a willingness to debate the data, rather than refusing to engage “denialists,” and darkly hinting that they are paid to lie by the oil companies (which are actually diversifying into “sustainable” energy as if there was no tomorrow… oh, I forgot – there is no tomorrow, for the End is Nigh). 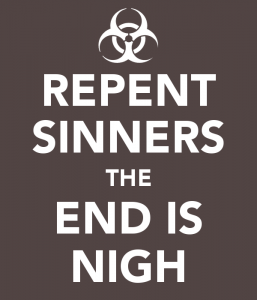 On that last, dirty money, score, you may be interested to know that Greenpeace’s clandestine research accuses big oil of spendinga princely  $1.8 million a year to spread their dastardly disinformation. By contrast, Greenpeace’s own figures show their own spending on climate change campaigning to average $34 million annually for the past decade – and that is just one NGO amongst many, without counting the IPCC, UN, the EU, and global corporations… including big oil.

The “oil corruption” claim is decidedly tired now, especially when it is hinted that even hundreds of “denialist” comments on climate blogs are paid for by Exxon-Mobil – just how far is $1.8 million supposed to spread?

It has been pointed out many times that science is not a consensus operation: it took only one Alfred Wegener to overturn a dogmatic expert consensus by proposing Continental Drift Theory – albeit it only succeeding thirty years after his death. But by any standards, 500 signatories on the European Climate Declaration demolishes the claim of a scientific consensus, even if 90% of them were said to be in irrelevant fields or underqualified. That would be a hard claim to maintain, since the majority of even the 600 IPCC scientists are biologists, computer modellers and other researchers with no direct climatology expertise (and the IPCC reports themselves have sometimes replaced their research with citations from newspapers and travel brochures!).

But if there is no unanimous consensus, then there is actually a scientific controversy. So where is the kind of open debate that took the science of life on Mars forward? Follow the money.