The population prediction bombs out

One of the earliest of the continuous stream of apocalyptic “scientific” prophecies that has culminated in 2030 and All That was Paul Ehrlich’s Population Bomb of 1968.

In this he foretold mass starvation and other disasters in the 1970s and 80s from overpopulation which – as your reading this proves – haven’t happened, even by the 2010s. Ehrlich has modified his predictions since, and in 2013, at the 7 billion population mark, he said it was the next two billion that would break the system. This year, next year, some time… However, he maintains that even the present population is too large: his ideal is 1-2 billion.

This graph shows the scale of the massive failure of his predictions on famine: 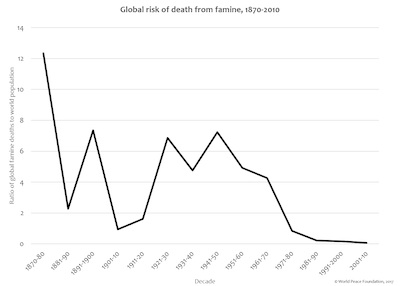 Note that deaths were already declining when he first wrote, but collapse almost as if to spite him from then on. It’s looked pretty damned healthy throughout the global warming scare, hasn’t it?

Nevertheless, Ehrlich got to be a Fellow of the Royal Society, and he remains hugely influential in environmentalism today. And by that I mean amongst those powerful people shaping policy. Prince Harry and Meghan have recently announced their intention to have only one child in order to do their bit. They have the ear of the world’s leaders (and presumably get their ideas from them, too).

The overpopulation charity, Population Matters of which Ehrlich is a patron, includes also David Attenborough, Chris Packham, Jonathan Porritt, and Jane Goodall. Its primary advice to us all is to have smaller families, though in fact the fertility rates in both Britain and USA (indeed the whole of Europe) have been lower than replacement values since Ehrlich wrote his book: population growth in these areas has been entirely from immigration. It is the poorest countries that have the high birthrates, for the reasons Hans Rosling states in this brilliant presentation (which incidentally matches the official UN projections) about why all the predictions of overpopulation are wrong.

The first interesting thing is how the statistician debunks the “exponential growth” myth by showing how population growth has been linear for decades, and explaining exactly why. There seems to me no reason to doubt his argument as to why population will level off at 11 billion at a predictable point, and already projections of food production are sufficient to provide for that, without resorting to eating cockroaches and killing all the livestock. 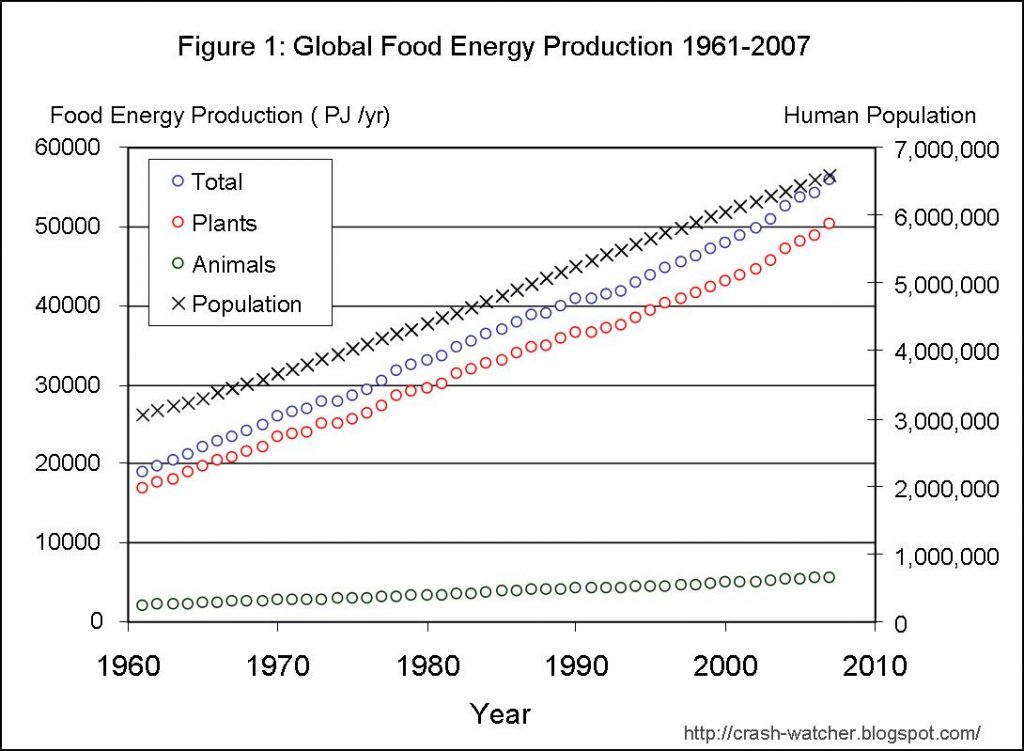 You’ll note there is a far closer correlation between population and food than there is between CO2 and global temperature data.

What is also worth considering are the flaws in the overpopulation enthusiasts’ reckoning. As Rosling points out, even in order to stop the population growing further (Ehrlich’s original aim), let alone causing it to shrink, there is only one decision to be made: who to kill. Population reduction is simply the old eugenics, only ignoring the failure of previous eugenic programmes to do anything except to make the twentieth century a byword for mass human suffering and inhumanity.

To reduce the population to the “ideal” 2 billion means (how could it not?) that you have to find a way for 2 billion people to murder the other 5 billion. Any volunteers? You will have to kill an awful lot, and they might even object. Here is the world population rise, and the growth rate. Note the deaths from deliberate killing, ie from two dreadful world wars, are not even detectable. 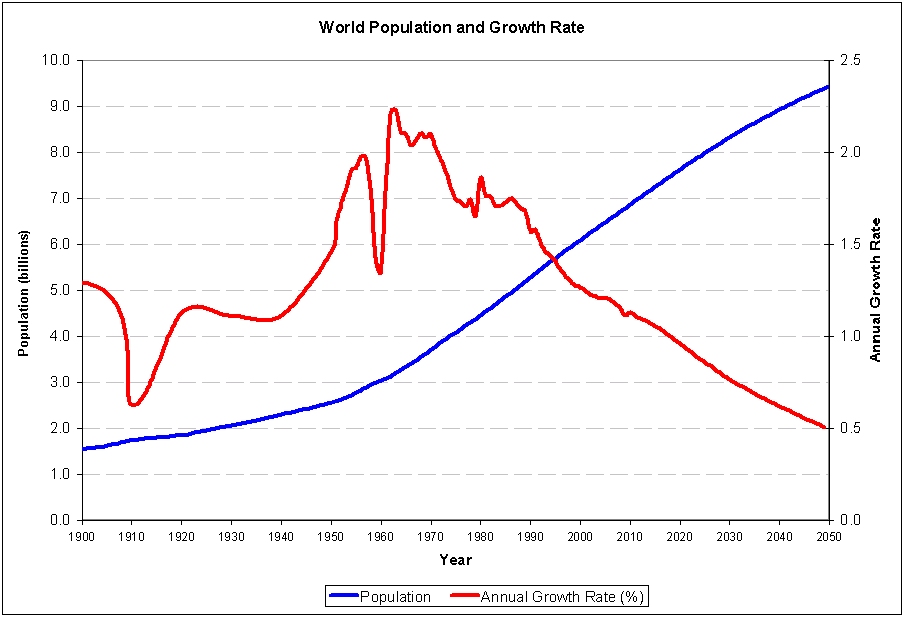 What “population decrease” also hides, of course, is that anything, natural or artificial, that takes out 5/7 of your population is also going to make life exceedingly hard for those who are left. The black death killed 1/3 of Europe. But because it took out those with skills, although individual wages rose, the economy slumped for 250 years afterwards: 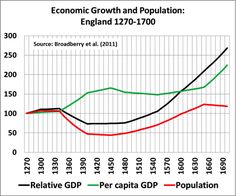 One should note that such stressed populations have to establish a very high birthrate to recover, because they have a high death rate: the low population is unstable. Perhaps the picture will be different if the plan is to leave a privileged élite and a planned number of workers to service the economy, killing only those deemed by them to be surplus to requirements. I believe George Orwell fielded such an idea, but concluded it to be a bad one.

Well then, what about the gradual reduction by having small families apparently advocated by Population Matters? Rosling shows why the anwer is “Good luck with that one.” Only one, totalitarian, country has ever managed to impose a one child policy,  and it had to do so by force, including forced abortion, which is surely state-sanctioned rape as well as murder. That is the People’s Republic of China. Here is the effect it had on China’s population: 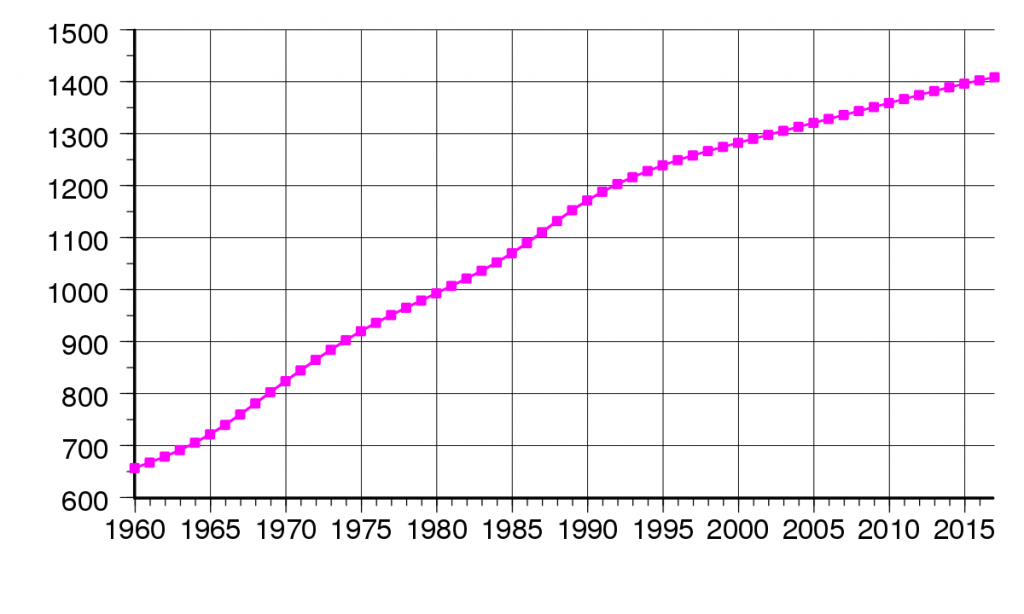 You can, at least, spot the kink in the graph, but I don’t think the excess 5 billion will be going anywhere in a hurry under such a policy, do you?

In conclusion, it is impossible to conceive of effective population limitation without the most draconian eugenics programme in history, dwarfing the Holocaust in horror. And simply from the realities of human reproduction, it would not work. It is rather sad, then, that such destructions of population are explicit or implicit in the economic goals of climate change activists. And that is not simply because of the human suffering involved in seeking to limit population by shrinking economic well-being, but because it is (as Hans Rosling shows) the very lack of economic well-being that leads people to require large families in the first place.

As a final reflection, it may be worth remembering that when God told mankind, at our creation, to fill the earth, it is unlikely that he made it inevitable that obeying that ordinance would end in tears. It seems to me that, to the contrary, when mankind prospers, growth is self-limiting. As Hans Rosling demonstrates so graphically.