Last week saw the launch of my new blockbuster book, Through Fiery Trials. 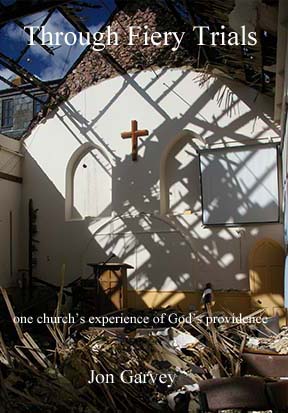 Don’t get too excited, though, as it’s a privately produced paperback, with pictures, with a limited print run of 200 copies.

I got The Generations of Heaven and Earth off to the publisher at the beginning of the year just in time for the tenth anniversary of the fire that burned out our old (1833) Baptist chapel. We moved to Devon just after that event, so I was party to all the upheavals and planning that eventually led to the new building, on a new site, that we now have.

So come the anniversary, since I had a “window,” it seemed a nice idea to interview the people involved and work it up into a story that would be a permanent record of interest to our church people, and also to the rather tight-knit village community surrounding it. It was, indeed, as significant a local event as when the thatched pub burned down a few years earlier, because there has been a Baptist presence in the village since before 1654, when a couple of Oliver Cromwell’s soldiers helped found the church.

Anyway, the good news for me over the weekend it that the book is selling like hot cakes, evidently at a far greater rate than my meisterwerk God’s Good Earth when that was published in January. And that seems to indicate that Through Fiery Trials may well become my most successful book so far, if not quite rivalling Harry Potter and the Philosopher’s Stone.

OK, I have my tongue in my cheek somewhat. But having made the decision that the book, although it might be encouraging to a wider readership, really belonged in its local community, I stopped looking for a publisher and enquired about private printing.

I soon found a decent family printing business in the nearest city, Exeter, and was immediately impressed by how flexible and economic short-run printing has become. The firm handles all kinds of small print runs, including academic journals, and technology now enables them to produce stuff to full professional standards at a cost that shows how little of the price you pay for a book is about the production cost.

I’ve always been interested in samizdat publishing. This blog is, in effect, an example of that. A couple of folks encouraged me to start it back in 2011, and I could do so without adding any cost to the web-hosting package I already had, and with complete editorial freedom. You may remember that for a while, even God’s Good Earth was posted here as a set of webpages, before it found a publisher.

It’s what the internet was originally supposed to be about, before Facebook, YouTube and all that crowd decided that only the “right kind” of content should be allowed. I’m free of censorship, I’m independent of any financial backing, and I can build a worldwide readership purely on the content… if you don’t count the mysterious spybots swamping the webstats from China, Russia, France and Amazon’s home, Ashburn – my provider tells me they’ve been responsible for 5,348 attacks on the blog in the last few days.

I suppose it’s possible that, when society gets even more tightly controlled, web-hosters too will start blocking accounts that have the wrong attitude on religion, gender or climate change, but NOT YET!

It appears that the biggest bar to getting unpopular, or even simply uncommercial, ideas into the world of books is the gate-keeping role of publishers (though I’ve been very impressed by the willingness of Wipf & Stock to put my stuff out there).

But I’m told it’s not at all hard to get a self-published book  on to the Amazon playing field, and now I’ve found how easy, and relatively cheap, it is to produce the thing to a good standard, especially if you can prepare your own copy in Word and your graphics in Photoshop. There’s a small additional cost and hassle to get an ISBN number, which I didn’t bother with for this book.

Promotion, on books that aren’t already destined for the bestseller list, is often largely down to the author anyway, and one may as well blag people for reviews of a self-published work as for one with  a publisher’s name on it. Publishers’ advances don’t exist in our world.

And with self-publication you get to keep the whole profit yourself, so you either sell your book at cost for $7, or call it “academic” and charge $120 like the big boys do. You may even find yourself with a bestseller, since publishing houses appear no better at recognising them than you are, judging by what a lottery finding a publisher is.

In summary, if you have a book in you, or better still languishing on your hard drive, do consider going the route of producing it privately and marketing it yourself. Vanity publishing is one thing (and a bad move) – samizdat is quite another, and no longer means smuggling carbon-paper copies of typescripts between your dissident friends surreptitiously…

3 Responses to My new bestseller