OK, that title was just an attention grabber, because Aquinas didn’t propose a Sixth Way, and the point I want to make in the next two two posts is covered in Aquinas’s Fifth Way, but it’s seldom appreciated. And that is that chance itself is part of the metaphysical argument for God. I think that’s worthy of discussion. 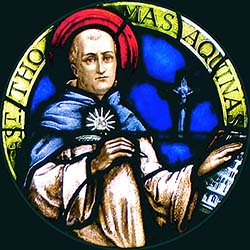 I briefly mentioned Thomas Aquinas’s five ways of demonstrating God through reason in this recent post. The Fifth Way is “the teleological argument” for God, and though I believe our Eddie Robinson is right (contra some modern Thomists) to believe that design arguments are encompassed in Aquinas’s thought here, there’s no doubt that the more fundamental understanding is not about God making complicated things purposefully in the world, but about the directedness of even simple processes.

What does that mean? Aquinas says:

Things which lack intelligence, such as natural bodies, act for an end, and this is evident from their acting always, or nearly always, in the same way, so as to obtain the best result.” (Summa Theologicae 1.2.3)

Thomas argues that this shows they act designedly, not fortuitously, and that therefore some intelligent being exists by whom all natural things are directed to their ends; “and this being we call God”. The observation is of consistency and appropriateness in natural occurrences. This become a little clearer when one remembers that Aquinas was working with Aristotelian physics, in which it is the natures of things which, say, determine that those with massive bodies are attracted in a mathematically describable manner, or that those which are acids always combine with bases to form salts and water.

But the argument is no less true on the modern physical scheme of natural laws, which is only to be expected as the early modern scientists who formulated the idea of “laws” envisaged the world as consisting of passive particles (Aquinas’s “natural bodies lacking intelligence”) which obey God’s natural laws, the direct equivalent of the Mosaic laws he gave for man to obey.

Physical laws are, conceptually, entirely teleological: they determine that cause A will always have result B, ie that A is directed towards B. This simple fact of teleology has been largely sidelined, philosophically, in the current practice of science, being taken more or less as a brute fact, that couldn’t really be any other way.

To say, correctly, that laws are merely empirical observations of what (up till now) has always occurred misses Aquinas’s point; that it’s actually very remarkable that anything should “always occur”. The issue of cosmic fine tuning – that the universe’s cosmological constants appear to lie within extraordinarily limits compatible with our existence – is an intriguing pointer towards an intelligent Creator. But the stronger evidence for design is simply that they are constants at all.

I should point out that Aquinas’s argument, applied in this way to modern science’s law-based scheme, in no way means that the universe must be rigidly deterministic if made by such a God as he envisages. It is not a Deist’s charter. God’s intelligence and design are to do with order and intelligibility, not rigidity, and hence Aquinas’s reference to things “nearly always” acting in the same way. God might, in principle, do occasional miracles, or bend, break or circumvent the laws. Or, as some suggest, what science assumes to be constants might actually vary over time, without compromising the truth of the Fifth Way. Good parents will provide a stable environment and rules for children, but still let them stay up late or pig out on ice-cream on occasions.

Neither, of course, do the empirical findings of science have any bearing whatsoever on the validity of the argument. If nature has consistent rules of cause and effect, then the ultimate origin of such rules is the matter to be explained, and not any precise mechanisms in the causal chain.

Aristotle, from whom Aquinas’s approach clearly derives, was actively opposed to the Greek atomists, who believed that order arose spontaneously from the chance collisions of atoms. He argued that there is absolutely no reason to suppose that order will arise from disorder, and that is still a strong – possibly incontrovertible – supposition now. Even Lawrence Krauss, proposing that the universe spontaneously came into existence from the quantum vacuum, presupposes the pre-existence of fundamental laws – the very thing to be explained according to the Fifth Way. Likewise, speculations about a multiverse in which each universe operates with a different set of laws and constants has to explain how any process that selects the constants “by chance” for each universe makes them constant laws: in other words, there must be a teleological process in order to make laws, even those incompatible with life.

I can envisage someone, in desperation, suggesting that universes generally are chaotic and lawless, but that by some remote contingency this particular one happened to turn out lawlike, which is why we’re here to wonder about it. But that misuse of the anthropic principle is simply to repeat the atomists’ empty claim that chaos generates order spontaneously.

I’ll leave it to the next post to deal more with “chance”, but here I just want to point out that “chance” and “chaos” (in the primal sense rather than the technical sense of “chaos theory”) are not at all the same thing. It’s quite hard to see that, or to give an analogy, because in fact we live in a cosmos that is unquestionably lawlike at the level of experience. Everything we experience as “disorder” is, at most, the disruption of existing order – a disruption usually caused by other levels of order. Chaos never produces order in our world. In fact, entropy demands the exact opposite, that existing order always decreases. Neither could it occur in any possible world, for a simple reason – we would have to ask how that world would be ordered differently from ours if chaos were to be able to produce its order. And that does not compute.

Perhaps one mental exercise to illustrate this in a limited way would be to imagine what the world would be like if one simple phrase in the Genesis creation story were not true; that the creatures God made did not reproduce “after their kinds” but fortuitously. That alone would pretty soon begin to reduce the world to primordial chaos. I’d like to close this post, though, with another example of a more whimsical, but on reflection quite instructive, kind.

In Michel Foucault’s study of the changes in how fundamental pattern of thought, that is what it is possible to think, have changed over the last five centuries, The Order of Things, he commences with a reference to a work by the early “magical realist” author Jorges Luis Borges. Borges playfully explores alien ways of thought by giving the taxonomy of animals from “a certain Chinese encyclopedia”:

The humour, Foucault supposes, comes from the obsessional attempt (a-n) to impose order on what is entirely devoid of order. The connection to a godless universe is the metaphysical inevitability (according to Aquinas) that it might be the best order one could impose on the reality.

Next time – chance and teleology.