Nothing in biology makes sense…

Announcements on the making of a new film about the Scopes Trial of 1925, Alleged, got me thinking about the history and mythology of evolution. The popular version is that since Darwin nothing has made sense in biology without evolution, despite the more entrenched parts of the Church, who were feverishly working away to develop Creationism and persecuting people like Scopes.

Anyone who knows some of the history has heard that by the end of the nineteenth century  Darwinism was actually in some disarray under the influence nof Mendel’s genetics, aretreat it only really overcame with the advent of the Modern Synthesis in the 30s.

Which version is closer to the truth? And what is the situation over the claim in Alleged and elsewhere that evolutionary theory was closely tied up with eugenics, a link that is often airbrushed out of history or pinned on the Christians instead?

I thought I’d have a look at my  Cambridge Natural History, which my brother rescued from the BBC reference library skip when I was doing zoology at school, and which I’ve kept on my shelves ever since because it looks so impressive. Published between 1895 and 1902, it’s a definitive 10 volume zoology text running to some 6000 pages by some of the great scientists of the age.

I started by looking at the general preface, and then the prefaces to each volume (each dedicated to a different phylum or class). I found a sentence or two on “vital force” in the section on Protozoa, but nothing on evolution. I was luckier checking the indices  – how many references do you think I found?

One, in the volume on birds. This, in the section on “classification”, says:

Genera are only more distinct from Species, amd Species from Races, because the intervening links have disappeared; and, if we could have before us the complete series which, according to the doctrine of Evolutionm has at some time existed, neither Genus nor Species would be capable of definition…

So the only part of Evolution important enough to make sense of the biology in the Cambridge Zoology is the doctrine of gradualism. Which does not seem quite so axiomatic nowadays.

To be fair, A H Evans goes on to describe Archaeopteryx as his first example, and calls it a “connecting link between Reptiles and Birds”, but its evolutionary significance is lessened by the fact that zoologists “are practically unanimous in regarding it as an Avine form”, as of course we all know.

Another probably evolutionary link is made in the Mammals volume, which decribes the then-fragmentary Pithecanthropus remains thus:

This creature is truly, as Professor Haeckel put it, “the long searched for ‘missing link,'”in other words represents “the commencement of humanity.”

Some clue as to the remark’s significance may appear from Fig 281, which shows a human skull and is captioned: “Skull of Immanuel Kant. The great size of the cranium is a noteworthy feature.” It seems our Immanuel was the original “smart”, and it would clearly be inappropriate to compare his skull to that of the missing link.

Another figure a couple of pages later confirms to evolutionary bent of, almost, the only of Cambridge Zoology’s writers to appear fully in tune with Darwin. Here it is, without further comment. 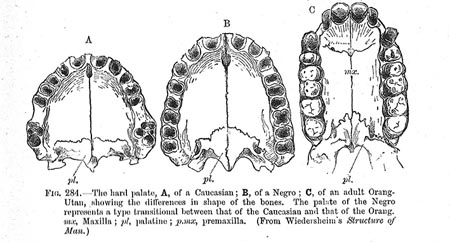