I want to move now to my doubts about Sober’s contention that non-human design is undetectable. I suggested in the last post that even human design is detected by non-materialist means, though that does not exclude human design from science. In a comment on the first post, Gregory suggests that the insistence on methodological materialism is limited to some scientists even in the natural sciences, and to fewer in the human sciences. To me that would suggest that, whilst detecting non human design must be more difficult, and less reliable, than in the human sciences, it must not be precluded altogether. Though die-hard materialists would never accept it, many in the human  sciences might find themselves convinced that evidence for it was sufficient and, more important in the long run, people generally might conclude that science does not, in fact, outlaw their intuitions. The decision must be made on the actual evidence, then, rather than a priori.

From what I have read (I repeat I’ve not had access to his actual writing) Sober’s case is that detecting design requires two filters: one along the lines of William Dembski’s design filter, and the second based on knowledge of the designer. The latter, it seems, is problematic to him mainly on the grounds that an alien designer’s work could be undetectable to us as design.

I’m not sure how much this is really a problem. ID writers like both Dembski and Behe accept that much design may not be detectable. Behe, for example, as a Catholic, does not believe that evolution is a purposeless process in which God is involved only in cases of irreducible complexity. Rather, he suggests irreducible complexity is the detectable instance that reveals God’s involvement in evolution. So Sober’s suggestion that aliens might not see a series of prime numbers as indicative of design, or that their idea of design might look random to us, only means that not all design is detectable. If both the aliens and us were into prime numbers, then our instinctive sense of design would be shared, and we would infer design as correctly as we would in the case of a Babylonian list of primes.

In the case of extraterrestrials, as in the SETI program, how likely is it that they would be so profoundly different to us that our communications would pass like ships in the night? Michael Denton, in Nature’s Destiny, by showing just how finely tuned the very chemistry of the Universe is, has suggested plausibly that life, especially intelligent life, probably has relatively few options. Simon Conway Morris, from his different convergent evolution approach, whilst suspecting that we may be alone in the Universe, thinks that intelligent life is likely always to have much in common with us.

This seems probable. For whatever reasons, we unaccountably have mental faculties that comprehend reasonably correctly the essential features of the Universe from the subatomic to the cosmic scale, despite (as Plantinga points out) the unlikeliness of Darwinian evolution producing such truthful perceptions. Einstein pointed out the mystery of the comprehensibility, and Eugene Wigner famously pointed out “the unreasonable effectiveness of mathematics.”

It is pretty likely, therefore, that any extraterrestrial intelligences would share similar chemistry, and for that reason a comparable environment in which would develop a similaqr kind of intelligence. Certainly they would be part of the same physical cosmos, and by most accounts their mathematics would describe the same realities as ours. It remains uncertain that aliens could decode the Voyager plaque  – many humans can’t! 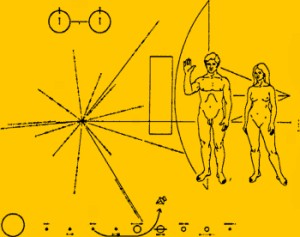 But it does appear likely that they would be intrigued by it and conclude, rightly, that it was designed. If Denton and Conway Morris are right, then they might be similar enough to gain some knowledge of the designer by the artifact.

What about design in nature, then? By Sober’s reasoning a divine creator would be even less like us than an extraterrestrial, so what hope of detecting anything of his design? With all due respect to Sober, that is not the issue. In the field of living things in particular, it is all but impossible to prevent humans seeing design everywhere. Long before science, animals and plants were considered, if not gods themselves, then the creation of the gods. The advance of science has only increased the conviction of design, so that even a century and a half after Darwin, Richard Dawkins defined biology as “the study of complicated things that give the appearance of having been designed for a purpose.”

I have written before that biologists are completely incapable of describing anything in biology, even evolutionary processes, in anything other than teleological language. One might paraphrase that, without exaggeration but with apologies to Dobzhansky, as “Nothing in biology makes sense except in the light of teleology.” If that were not so, ateleological language would be the rule, rather than the exception. Design inference from nature is near universal, and one of the hardest tasks of materialists is to keep it in check.

Why should that be? At its most basic, since for whatever reason our mental faculties are able truthfully to comprehend much of the nature of the cosmos, then they must also be reflecting some of the nature of any being who designed it. More strongly, if the Abrahamic God is the Designer, then we have been created in his image and he is not alien at all. Other, yes, but alien, no.

Let’s pull this together. Sober’s case rests mainly on the failure of the design inference because of the dissimilarity of a non-human designer. He accepts that our intuitive recognition of human design is at least reasonably reliable. It follows, then, that it would also be reliable to the extent that aliens, or deities, are similar to us. Or conversely, that the recognition of design is evidence (at a human, rather than a materialist, level) that there is a designer with some characteristics in common with us. There might well be differences which mask the fact of design from some of such a designer’s work. But in other cases design might still be obvious, but different enough from our own efforts to teach us something new about the designer.

All it would take would be an admission that our instinctive sense of design is, at least to some extent, a reliable means of gaining information. And we have as much evidence for that as for the reliability of scientific reasoning.

8 Responses to Is design undetectable? (3)