Faking history for the better teaching of – history

Further to the discussion about the distortion of history in the new Cosmos series (now, I gather, nearing the end of its run in the US), there has been a new discussion on a historian’s blog suggesting the possibility that the deliberate misrepresentation might possibly be justified for “greater truth”. The link to this came from a piece on Evolution News and Views, which rightly points out the tricky ethical waters this discussion is navigating.

You should (of course) read the linked thread, but the basic discussion was that, to make science more readily acceptable against the cultural prejudices of America – including the propaganda of Creationists – that “artistic licence” in the use of history, whilst alien to the professional historian, might be “useful” for the greater good.

As it happens, we’ve had a professional historian as a house guest this week – and a historian of Soviet Russia, at that, so well-acquainted with the concept of history heavily revised as ideology. When I mentioned the thread over breakfast, she commented how she used to tell her students that the ends never justify the means, sometimes (she thought) to blank incomprehension). Maybe some of the contributors to that thread were those students.

Remember just what the script of Cosmos has been doing, and why. All history is, necessarily, selective both as to the facts it cites, and the interpretation it puts on them. That will  (as was recognised even before Postmodernism peddled it as a great new discovery) mean that the historian’s ideology will colour their history, and that bias must be recognised by those reading it. That was true for Sennacherib interpreting his invasion of Judah as “trapping Hezekiah like a caged bird in Jerusalem”, and the Hebrew writer of Kings interpreting the same events as a great salvation in the course of God’s judgement of his people.

But Neil deGrasse Tyson’s script in Cosmos has not been coloured towards promoting science – it has been the presentation of frank (and well-demonstrated) untruths in order to create, or perpetuate, a myth about religion as the enemy of science, and an attempt to promote secular materialism and damage Christianity. Whatever “greater good” that is, it is nothing to do with the public acceptance of science.

Sociologically, of course, it is no more or less than a typical crude example of history subordinated to ideology in order to persuade where true evidence is lacking: certainly such evidence for materialism is not provided by science. The sole support in the series for the ideology of materialism (as distinct from the science, which was very often done by believers from religious motives, as we know) is the moral case arising from the (forged) history – that religion always blinkered and penalised the search for truth. That the case so presented consists of outright lies, once examined closely, completely destroys it, and strongly suggests that “the quest for truth” either wasn’t such at all, or was done by a different, more truthful, bunch of people than the makers of Cosmos. Fortunately the latter appears to be the case.

New Atheists (including scientistic commenters in the science-faith discussion) make much play of Christians “lying for Jesus.” Even if it were more true that it actually is (remember, that ideologically biased interpretation is a fact of all history and all life, not evidence of lying), that charge would fall to the floor once one legitimises falsifying facts for “the greater good”. If a Creationist “knows” the literal truth of Scripture is indispensible for the salvation of lost sinners for eternity, then it is intrinsically a better reason for skewing the truth than any program for public science education is. Maybe that was the kind of good justification used by the meidiaeval monks of Glastonbury spinning yarns about their Abbey being founded by Joseph of Arimathea and the bones of King Arthur being buried there. If souls are saved, where’s the harm?

It’s equally a good reason for Hitler to falsify the history of European Jews, for Lenin to re-write the history of Russia, or for the King of Siam to teach Siamese kids that their nation rules the world. That is, it’s nothing but downright, dirty lying.

Likewise, if such cynical revisionism in history is ethical, then not only would it be OK for scientists selling science, but for Christians (like BioLogos, say) selling science: and we would expect work like Ted Davis’ excellent science history series there to be “playing into the hands of Creationists” and counterproductive to truth… or, given the prevailing morality, we could easily persuade ourselves that Ted makes up his history to suit himself like everybody else. Such a hopeless web does falsehood weave.

I’ve experienced at first hand people bearing the label “Christian” being willing to believe pious rumours or poor scholarship because it confirmed their faith. But I have to say I’ve never seen it done deliberately, and justified in some kind of Jesuitical fashion (I don’t even know first-hand that the Jesuits do it – maybe that’s biased history too). To see professional historians discussing it as a viable option is tragic. Apart from anything else, it makes “true history” just an academic game for a professional clique, rather than the pursuit of truth for human good – which is what both science and Christianity are. And if such moral gymnastics actually happen in academia beyond blogs justifying them (or at least, playing devil’s advocate with the idea), then we have a very uncertain basis for believing anything we’re told.

One more point. As far as our own area of evolution goes, the “science” being promoted is largely an historical science. I’ve argued before that, now mechanisms beyond competitive natural selection are being recognised in biology, evolutionary biology is fast becoming far more a humanity than a science. Once, in the good old days of Darwin, knowing that all things arose by random variation and positive selection, one only had to find plausible reasons why species A outcompeted species B, or why feature X bequeathed advantage. If it wasn’t right, it wouldn’t be far off. But the same observations now might represent not only competive adaptation, but cooperative adaptation, spandrels, neutral evolution, etc, etc. As in humnan history, which factors best explain a long-gone event are a matter of judgement – as weall as of of ideological predisposition.

That raises the fascinating ethical question of why, if it is quite acceptable to lie about Giordano Bruno, Galileo or Michael Faraday for the “greater good” of promoting a scientific worldview, it would be so wrong to lie about natural history in exactly the same way, and for exactly the same reasons. One might even see things like – I don’t know – faked embryological drawings being used in school biology textbooks… Students could always find about those things later in the academic literature later, but the great thing is that they would have adopted the Correct World View already. And that, of course, is good. 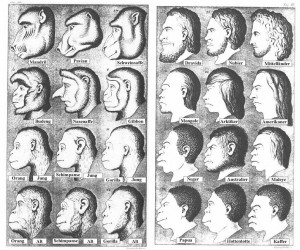 Training in medicine (which was my career), social psychology and theology. Interests in most things, but especially the science-faith interface. The rest of my time, though, is spent writing, playing and recording music.
View all posts by Jon Garvey →
This entry was posted in History, Politics and sociology, Science, Theology. Bookmark the permalink.

2 Responses to Faking history for the better teaching of – history