The relationship of creation to salvation

It’s often said that the doctrine of creation is of relatively minor importance compared to the gospel of salvation. What we believe about creation doesn’t make any difference to eternal life. But this view is because creation doctrine is not properly understood. In fact the two things are inextricably entwined – it is not for nothing that the Bible, the story of salvation, begins and ends with creation.

In the first place God is entitled to worship not just because he is great or good, but because he is our maker, and we are his. As Jacobus Arminius wrote:

This creation is the foundation of that right by which God can require religion from man, which is a matter that will be more certainly and fully understood, when we come more specially to treat on the primeval creation of man; for he who is not the creator of all things, and who, therefore, has not all things under his command, cannot be believed, neither can any sure hope and confidence be placed in him, nor can he alone be feared. Yet all these are acts which belong to religion.

You’ll remember those Star Trek episodes in which a some pathetic alien expects worship from our heroes because he is so powerful and dressed in a toga. But it is because he is our Father and the Author of creation that God deserves worship. As an aside, it’s also central that God be not a creature himself, as the Star Trek aliens are. In (I think) an Isaac Asimov story, the protagonist was shocked when the robot he’d made expressed his greater loyalty to God, and the ultimate maker of them both. The robot got it right.

The degree to which God is worthy of our worship is logically related to the degree to which he was responsible for creating us. The atheist, believing that an unplanned and impersonal process that didn’t have him in mind made him, has no reason to be grateful to it.

For the Gnostic, the Demiurge was not an object of worship because, although our maker, he has “misinterpreted” the perfect will of the highest God, and our material nature is inherently corrupt, and something to be escaped. True worship, to the Gnostic, is only to do with the spirit that comes from God. From Wikipedia:

Several systems of Gnostic thought present the Demiurge as antagonistic to the will of the Supreme Being: his act of creation occurs in unconscious semblance of the divine model, and thus is fundamentally flawed, or else is formed with the malevolent intention of entrapping aspects of the divine in materiality.

So to whatever extent God may be suggested to have not intended me, as the entire human individual I am, to that extent I do not owe him worship. Likewise, to the extent that nature is my “co-creator,” nature is also rightly the object of my worship. And if I am my own co-creator (as part of nature), then it is legitimate to worship myself. This is the logic of the self-made man.

The duty of worship is therefore inextricably linked to ones doctrine of creation, as of course is its joy. Praise stems from admiration for who God is, and we know that through what he has done in both nature and human affairs, as well as what he has said. That’s why it is so essential that God be seen as the sole Creator of all things, and that any secondary causes that might be involved are recognised to be used by him as instruments, not delegates.

Similarly God is able to judge us not just because he is righteous, but because he created us righteous and, as our Creator, is entitled to expect that we will live according to our nature. The Bible account, of course, makes that clear: the first couple in the garden were given original righteousness, life and communion with God. Their judgement came through their disobedience, which was nothing but a denial of their created nature.

Since Darwin, many versions of theology dependent on his theory have given an alternative view of sin and judgement, in which sin, usually reinterpreted as “selfishness”, is the natural outworking of our animal origins. The command of God – whether a specific command as in Genesis, or some revelation of moral law through conscience or something else – is often added on to that. But that renders our subsequent disobedience a sin against only grace, and not against nature. For God to take away our very nature through death was, therefore, unjust if all we did was follow its primaeval dictates.

In many, or most, such evolutionary theologies, judgement is airbrushed out of the picture anyway. One example of this is the currently popular and completely non-Irenaean “Irenaean theodicy,” in which the Fall was just part of God’s “soul-making” process and so, indirectly, a fall upwards from nature. But if nothing else, the amount of Edenic imagery in the Bible, and the need and the promise of a new creation, show that “how we were created” is the baseline by which we are held accountable. Sin came into the world through one man, not through God’s creation.

And so it is that creation is closely related to the Incarnation, too, and in more ways than we sometimes appreciate. In his important work on the Incarnation, St Athanasius shows how the excellence of our created nature, beyond the limitations of the rest of the earthly creation, came from the life of Christ imparted to us:

This, then, was the plight of men. God had not only made them out of nothing, but had also graciously bestowed on them His own life by the grace of the Word. Then, turning from eternal things to things corruptible, by counsel of the devil, they had become the cause of their own corruption in death; for, as I said before, though they were by nature subject to corruption, the grace of their union with the Word made them capable of escaping from the natural law, provided that they retained the beauty of innocence with which they were created. That is to say, the presence of the Word with them shielded them even from natural corruption, as also Wisdom says:

His source here is primarily John 1, in which the creation of all things is done through Christ the Logos, and in particular he is the “In him was life, and that light was the light of men.” To Athanasius, then, what was lost in the Fall was the life of Christ himself, and so it was that only Christ himself could restore his Creation through the Incarnation.

We will begin, then, with the creation of the world and with God its Maker, for the first fact that you must grasp is this: the renewal of creation has been wrought by the Self-same Word Who made it in the beginning. There is thus no inconsistency between creation and salvation for the One Father has employed the same Agent for both works, effecting the salvation of the world through the same Word Who made it in the beginning.

Indeed, as I’ve pointed out before a strand of teaching in the Bible subordinates the original Creation itself to the role of Christ as Saviour: he is the “Lamb chosen from before the creation of the world,” (1 Pet 1.18-19, Rev 13.8). Creation happened consequently to the setting apart of the Son for sacrifice.

Part of that salvation, though, is the re-founding of creation itself – salvation has cosmic consequences. This is most notably described in Romans 8, in the “groaning creation” passage. This is often taken as evidence that nature was corrupted in the Fall (and is therefore a problem passage that leads YECs to doubt evolution, with its pre-Fall death, and leads TEs to doubt Paul’s inspiration or to compose novel theodicies). But note how Athanasius treats the idea in the first passage of his that I quoted above. “…[F]or, as I said before, though they were by nature subject to corruption, the grace of their union with the Word made them capable of escaping from the natural law, provided that they retained the beauty of innocence with which they were created.”

Nature, as constituted by God, then, was subject to “corruption” (ie to mortality), but man was exempted in Eden because of the life of Christ in him. But the work of Christ in the flesh has achieved something even more wonderful than the salvation of human souls: it has accomplished the eventual transformation of the natural creation into incorruptibility. The resurrection life of Christ flows out not only to those who believe in him, so that they too will rise and live eternally, but it somehow also floods into the domain of which man was originally created vice-regent, the natural creation.

A return to Eden would be a worthy aim for God’s salvation plan. The creation was “very good,” and man was not only good but potentially eternal. But God planned something more. The state of creation is described in Romans 8 in negative terms, as “subjected to vanity”, which is, I think, intended comparatively rather than absolutely.

Part of that “groaning” (admittedly expressed as a personification, but surely metaphorically) is no doubt because man’s sin has polluted it as an unblemished expression of God’s wisdom and goodness. Part of it is because the sorry tale of sin has delayed a transformation that (who knows?) might have been accomplished through sinless human stewardship. But the major element is that, in his wisdom, God initially created it in subjection to the bondage of decay (Rom 8 20-21, NIV) so that, through the liberation of the children of God, it too might gain the same freedom.

Now I admit, I don’t know exactly what that means for the future of the cosmos. I’m not alone in that. But what I do know is that from beginning to end, Christian teaching about God’s salvation is intimately associated with Christian teaching about creation. Get one wrong, and the other will certainly be wrong too. Conversely, understanding either one aright will cast light on the other. 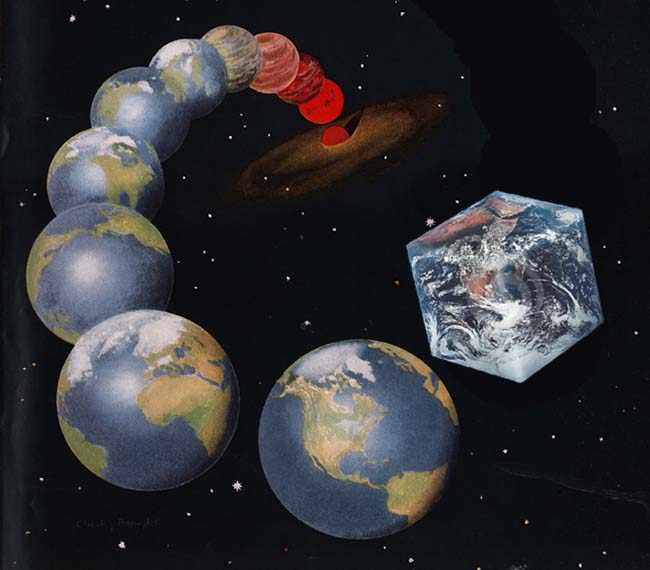 Hmmm… maybe not. Apologies to Chesley Bonestell, an early inspiration

6 Responses to The relationship of creation to salvation