Léon Croizat and other lunatics

Many years ago I was part of a group of doctors in Essex, UK, who met with local police officers to discuss drug misuse. The police spokesman, tongue firmly in cheek, said: “Essex doesn’t have a drug problem, because we don’t have a drugs squad.” Later, of course, one was formed, and as if by magic there was a problem to solve.

I was reminded of this when reading Stanislav Komárek’s European view on the history of mimicry in evolutionary theory, with his caustic appraisal of the loss of valuable lines of investigation and much data through the hegemony of “Anglo-Saxon” Neodarwinian biology. These areas only appear scientifically so settled because nobody pays attention to the alternatives any more. The theme touches many areas of interest to The Hump. The obvious (and more superfical) ones are things like the unofficial – or official – outlawing of any theistic or non-materialistic understandings from that western “consensus”, and the related “culture-wars” issues over the demonization of intelligent design researchers, and more broadly of non-theists like Stuart Newman or Eva Jablonka daring to critique the received wisdom.

But there are other more substantial issues, in my view, such as the ideas we’ve covered through Polanyi, Eddington, Wallace and a number of others (including Komárek himself) about the rootedness of science in both cultural prejudices and personal and group politics. This is not to denigrate science, but to de-divinise it as being better understood not as the Only True Source of Knowledge, but as just another human endeavour after truth requiring the effort of unpacking unhealthy influences, and stringently resisting them. To deny the human weaknesses of the scientific enterprise is to foster a totalitarian system. Here’s a quote from a paper I’m going to introduce shortly:

The conference Scienza e Democrazia – Science and Democracy recognizes the critical problem of democratic control over scientific research and the role of internal politics within scientific communities. The ambition for scientific knowledge to be free of political and ideological bias is confounded by the fact that science is a profoundly ‘social’ construction produced by hierarchically organized groups that evaluate, award, and punish their own members, and exert control over what opinions can be held or even just discussed in a public setting.

In other words, the very organization of science predisposes it to bias. Here’s a parallel case. In mediaeval Europe it was possible to talk unreflectively of “orthodox theology” and of all outliers being on the “lunatic fringe” of heresy. In fact the range of opinions allowed in theology in the universities was probably a good deal wider than that in biological scientific publication now. But the general uniformity is simply explained by the fact that a heirarchical Catholic Church had a strong power-relationship with authoritarian governments – intellectual life reflected the official values of Christendom, and other views were silenced or sanctioned. For all that many of us would bemoan the “every man his own Pope” attitude prevalent today, it’s obvious from the fact of the Reformation that there was much theological truth that lay outside what mediaeval Catholicism had sanctioned, though much within it was common ground. The reformed Churches could still call themselves “catholic and orthodox”, but not in vain did Luther talk about the “Babylonish captivity.”

There are still “doctrinaire Catholics” to be found on many discussion forums, in the sense of their holding Tridentine Catholicism to be error-free, and all dissenters therefrom rank heretics. But we can all live comfortably with such opinions – who knows, they may even be right – unless through political power or personal influence they were to suppress dissenting views. There is good evidence that the mantra “science is self-correcting” is not an amulet against the quiet word to a journal from an influential figure, suggesting that publishing a certain article will not be good for his employment.

Most of all, though, my interest in the question “Just whose science is hogging the campfire?” is of potential importance to Christians engaged in science. Whether or not “suppressed” science has any bearing whatsoever on specific religious interests, Christians are supposed to be concerned with truth and justice. We should no more enshrine intellectual monopolies than we do financial ones.

So the small research question I began to set myself, to clarify the history a bit, was the specific one of just how the “Modern Synthesis” came to displace, so completely, so utterly, one formerly dominant idea – orthogenesis – in western biology. After all, a majority of biologists had, by the turn of the twentieth century, consciously decided that Darwinian natural selection was, at least, badly deficient and opted for othogenesis (a range of theories suggesting that evolution happens from structural or other predispositions apart from selection – but why do you suppose I even need to tell you that, since it was the dominant theory just a century ago? Was the modern synthesis really so good that all memory of its rivals just evaporated like dew in the sun?). 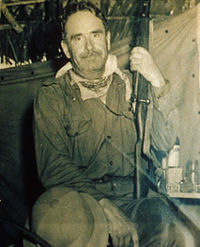 In the event I stumbled instead on one particularly illustrative variant of orthogenesis: the theory of Panbiogeography proposed by Léon Croizat, about which a fascinating chapter is to be found here.

What I find instructive about panbiogeography is that it is a completely non-mystical form of orthogenesis that adds a new and potentially profitable dimension to evolutionary theory. It has even, in fact, recently become quite respectable (unlike, say, ID). Wikipedia says:

Over the last two decades, panbiogeography as first conceived by Croizat and further developed by researchers in New Zealand and Latin America became established as a productive research programme in historical biogeography. Panbiogeography provides a method for analyzing the geographic (spatial) structure of distributions in order to generate predictions about the evolution of species and other taxa in space and time.

The fact that (I suspect) few of us have heard of it in connection with geographical evolution indicates something more. The Colacino and Graham chapter gives plenty of instructive detail on the science itself, which I won’t repeat. It’s the suppression of the science that concerns me here. An Italian-born Frenchman, working in the US from 1936-46, Croizat was dismissed from his job for a personal grievance (his papers had criticized the wrong work) and, unable to find a job in the US, he moved to Venzuela. Because his developing theory cast doubt on Neodarwinian palaeogeographical assumptions (although it was inherently superior in being empirical rather than model-based), he incurred the wrath of figures like Gaylord Simpson (who called him a member of the lunatic fringe) and Ernst Mayr (“totally unscientific style and methodology”). Such people therefore felt it no injustice to prevent publication of his work, which of course they had suffcient influence to do more or less effectively, so that he had to publish privately or in obscure foreign journals.

As the article shows, the irony is that both of these eminent figures, because of  their theoretical framework, denied the existence of continental drift for years after Croizat had successfully incorporated it into his theory, which also predicted it. The article shows also how subsequent commentators have both misrepresented his work significantly and detrimentally, and downplayed those areas in which he was right and his detractors wrong. Even the history is hagiography.

Now one can point to the rehabilitation of his work (at least by some workers in some countries, against strong opposition) as evidence of science’s principle of self-correction. But sixty years of suppression (often to defend individual positions of power and influence) is hardly a model to boast about. There are others whose good work has simply been lost: Croizat, after all, had a perfectly naturalistic theory that just happened to question the all-sufficiency of the narrow ruling paradigm (as indeed had evolution’s founder – Darwin increasingly assumed a background of orthogenesis in evolution, as well as Neo-Lamarckian mechanisms).

Most other orthogenic theories, having a strong sense of “form” or even teleology, remain confined to “the lunatic fringe” – which means they are not regarded as science at all, and most of us haven’t any idea what they are about, and have to dig deep into rare old documents should we want to find out. But Croizat’s story shows that it is not only the Velikovskys and Sheldrakes who get sidelined (and even they should be refuted, not censored, if truth is really the goal).

I have no personal brief for panbiogeography, though it sounds interesting enough. But it’s clearly perfectly legitimate science, and should have been published and read freely for the scientific community to evaluate from the first. It should’t have been possible for staunch defenders of one theory to rule on the lunacy of their critics. But the work wasn’t given free rein, just as much of Barbara McClintock’s work wasn’t for decades after the early 1950s – one could cite a litany of other examples, like W. L. McAtee, whom I mentioned in the aposematism column.

The scientific community must regulate itself as it wishes – I don’t belong to it now, and only floated around its rim as a working doctor – though even in that position the all-too-human face of science was a daily issue. However the lesson for Christians (and given the focus of this blog, of course for Theistic Evolutionists in particular) is this. Since the case for destructive hegemony and censorship in the scientific community is strong, we should be very cautious to assimilate theology to science too quickly. Whose science, exactly, is being incorporated, and whose unconsciously ignored? If we are uncritical in this way we are in danger of being like much of the Victorian Church in supporting powerful establishments rather than those in the factories denied their legitimate voice.

5 Responses to Léon Croizat and other lunatics