Fundamentalism, materialism and their family reunion

The ongoing series on BioLogos in which former Creationists testify to their coming to peace with evolution says more, in my view, than the simple message that evolution and faith are compatible. It says something about conversion psychology.

People do modify their opinions all the time, of course, or they cease to be human. But saltational changes in ideas have particular characteristics. For example, the person brought up under an oppressive communist ideology and enthusiastically committed to it, on suddenly discovering that what he was told about the west was lies, is apt to become insufficiently critical of capitalist culture. That’s not always the case of course – alternatives are to deny the evidence and remain a leftist zealot, to become cynical about truth altogether, or occasionally, like Alexandr Solzhenitsyn perhaps, to be able to critique both east and west by an independent standard – in his case Christian faith.

But the last course is a lot harder than it would be for someone not facing radical disillusion. That’s why I think it’s a lot easier for those of us brought up outside the United States to examine the potential agreements and potential sticking points between science and Evangelical faith, though we no doubt have many blind spots of our own.

In my own case, for example, which is pretty typical of Brits of my generation, I was comfortably aware of the basic facts of evolution – old earth, common descent, transformism – from the age of five, when my experience of religion was of the “God bless Mummy and Daddy” variety. Along the way Adam, Eve and the Ark got into the Sunday School curriculum, but no more polemically than they would teach Jesus’s miracles as a denial of modern naturalism.

Becoming a Evangelical Christian at the age of 13, when biology also became my favourite school subject, certainly raised the issue of different accounts of origins. It also showed me that Christians had different views, sometimes strongly held. But for every brother one met who said that both Genesis and evolution couldn’t be true, there were others who said it wasn’t a big problem. The same diversity and openness to discussion were even more obvious doing Medical Science, and Christianity, at Cambridge. There one became somewhat more aware of the details, and the issues, and that they were not unimportant. But since they were never seen as clashing ideologies – the Bible OR science – both varying interpretations of Scripture and critical attitudes to the science were always on the table.

My point is not that there were those who had managed a satisfactory resolution between Moses and Darwin; one of the main reasons I took time to look into things after my retirement was because of the number of loose ends. But the advantage was that the unresolved tensions were treated as provisional and epistemological: maybe there is more to uncover about the science, and maybe there’s more to understand in God’s word. And maybe there are suckers who think it worthwhile spending time and effort on it…

One of those “uncoverings” was the way that that Darwin himself had set up something of a straw man in Origin of Species. Examined closely, much of his argument took the form of showing how common descent made more sense of the evidence that the special creation of fixed species, rather letting his theory of natural selection cling to common descent’s coat-tails, on much weaker evidence. One effect of this was to pit Genesis Literalism against Natural Selection, though few theologians of the time were (to use an anachronistic term) Young Earth Creationists, and neither were most Christian biologists.

But the Origin’s main audience was moderately educated but unsophisticated readers, some of whom were literalists, but many (like Darwin, perhaps) disillusioned literalists keeping religion at arms length. For both groups, then, the choice offered by Darwin seemed the valid one. Similarly, in our own day it would seem that for the Fundamentalist (or the Evangelical from a monoclonally literalist background), the sudden realisation that there is genuine evidence for evolution inevitably predisposes one to say, “My church leaders are wrong, and the professors must be right,” if one doesn’t say instead, “The biologists are in a conspiracy against God – let’s change to chemistry.” Incidentally that dichotomy isn’t helped by biology textbooks that reinforce it, nor by professors giving their “Now is the Hour to choose Truth or Stupidity” talks.

With such a violent change in outlook, such students are probably less well placed than most others to examine the things that aren’t presented in the choice. Theologically, of course, Fundamentalist pastors are hardly likely to be well-versed in, or well-disposed to, alternative biblical hermeneutics, church history, philosophy or metaphysics, so it’s no use going back to them. Neither are modern biologists noted for the self examination of their own discipline’s history, philosophy or metaphysics, as I’ve been trying to illustrate in some recent posts.

The common result seems to be, then, not so much the synthesis of religious truth and natural truth into an inclusive worldview, but the Darwinisation of theology. This, I would argue, is at least in part the replacement of one overly materialistic theory – Creationism – with another overly materialistic theory – Neodarwinism. As Darwin’s own opposition of the two showed, they both manage to steer round the deeper issues implicit both in Christianity and science.

One clue to this selective blindness is the way that much of the philosophical milieu that existed in Darwin’s time, and which provides the seldom-stated, and perhaps unconscious, underpinning of his approach, has changed – but neither Fundamentalism nor Darwinism has really noticed. For example, to Darwin’s intellectual generation, it was more or less proven that miracles had no place in the universe, with or without God. And of course one strand of Darwin’s argumentation was the suitability of natural processes and the incredibility of miracles in biology. The “convert” from Creationism to evolution tends to see the logic of this in a vague way, without realising that to Darwin it was not, as it were, a matter of God’s good taste, but of a basic argument – “If my theory weren’t true, you’d have to believe in miracles.” But of course, today’s theistic evolutionist often does believe in miracles, so long as they’re “religious” rather than “scientific”.

Another example of such change is the shared cultural perception Darwin and Special Creationists had in the inevitability of progress towards mankind as its culmination. That still clings sufficiently to evolution to provide a vaguely plausible background to any theistic evolutionist idea that “God intended man”, or even that the world was created (through evolution) for man. But it’s not in any sense, as it was for Darwin, a self-evident truth of the science, which just as realistically sees humanity as a small aberration in the Kingdom of Bacteria. “Evolution inevitably brings the best and highest” was thought to be part of science – it is no longer.

Of course, there actually are many other alternatives to Darwinian theory than miracle, in any case. Even Darwin came increasingly to accept some of them alongside his own theory, such as orthogenesis and acquired heritable characteristics. He excluded catastrophism and saltation, both of which are either confirmed or under serious consideration now. his colleague Wallace rejected Mendelianism, which has become the ruling orthodoxy, after proving to be compatible with selection after all.

More importantly, for the proper education of the “New Evangelical Evolutionist” is the sea change in metaphysical understandings since 1859. Both Creationism and Darwinism took reductive materialism in science for granted (if one discounts Darwin’s theistic suggestions on the origin of life itself). But between an emerging Neo-Aristotelianism, information and mind based metaphysics and other contenders, that can no longer be assumed. Materialism is in increasing trouble, and that matters if we are to hold together the truth of biblical revelation (which, if it is God’s word as Evangelicals believe, transcends all theories, whether scientific, philosophical or metaphysical) with the truth of the natural world (which is increasingly being seen to have only a nodding regard for the theories we impose on it). 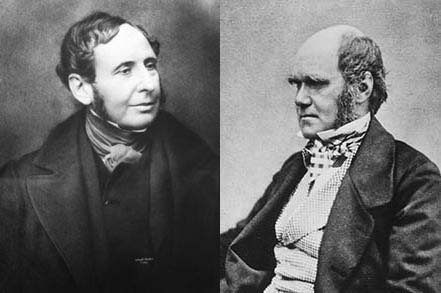 Two Victorian scientists – two views on literalism. Fitzroy and Darwin. They remained friends, but Fitzroy opposed evolution at the famous Oxford debate (and, showing the tenor of the times, was shouted down).

Both Young Earth Creationism and Materialistic Darwinism really belong back in the nineteenth century, where they may be seen to be close, if somewhat estranged, siblings.

4 Responses to Fundamentalism, materialism and their family reunion