I have a couple of posts in reply to Darrel Falk’s review of Alister McGrath’s book over at BioLogos. My entrée was to critique McGrath’s cavalier use of some of the writers I have dealt with here at length (though I should mention that the book has been on our own recommended list for a year or more). But underlying that I’m still rather mystified about what overall case is being argued, whether by McGrath of Falk. I may be obtuse, but it looks as though the New Revelation is that God’s planning and purpose might possibly work through the mechanisms of mutation and selection through the wonder of providence. If that’s so, it’s where I came in several years ago and what Calvinists and even Anglican Christian Socialists have said since at least Kingsley and Warfield’s time.

But if that’s the case, it’s being argued in a rather opaque fashion through a muddy field of talk about an ill-defined “randomness” and God’s equally ill-defined providence in relation to it. As I point out in my second comment there. I’d like to introduce an analogy – which is really just a different case of the same providence – to illustrate why I think the BioLogos viewpoint is confused. And that is, the theory that first century Jewish births are random with respect to fitness to be an apostle of the Lord Jesus Christ.

Social historians, we’ll suppose, have examined all that is known about the statistics of Jewish births around the time of Jesus. They find that there are only fourteen unequivocal instances of apostleship (discounting perhaps some looser use of the term in the epistles): that is, the original twelve, Matthias and Paul. As far as they can judge, there is no law governing the appearance of such apostles – they come, apparently randomly, from different walks of life, different localities and so on, the only clear limitation being male gender, which in such a small sample may even be a statistical artifact.

The vast number of Jewish births from that time turn out not to be advantageous to apostleship. In fact, the proportion of births showing “fitness” as apostles is such a low proportion as to be infinitesimal. Indeed, even one of the fourteen apostles revealed catastrophic defects in the end, and none of them could be said to display optimal fitness.

The historians’ conclusion, then, is clear: Jewish births are random with respect to fitness as an apostle, and the mechanisms of selection, whatever they might be, produce not what is optimal, but only what is “sufficient for survival”. This is deemed to be a sufficient Theory of Natural Apostleship.

But then along comes a new breed of historian, espousing a theory they call Historical Creation or Theistic Natural Apostleship. They point out that the Old Testament contains some passages suggesting that the coming Messiah would have such a band of followers, and that one might therefore suggest that, in some way, God’s providence was involved in there being apostles.

Now, granted the finding that births are random with respect to fitness as an apostle, it could nevertheless be the case that in some way God is able to harness that randomness to ensure that, de eventu, some such group would emerge from Jewish society. Given that false messiahs also appear to have had disciples, we could postulate some natural law of “convergence”, working in conjunction with the random process of birth, ensuring that from time to time similar groups of “apostles” were bound to appear.

That is the theory the “HCs” (or “TAs”) are working on, and they are keen that it should not be seen as distinct from “Natural Apostleship”, whose tenets have long been shown to be beyond dispute.

However some awkward critics, also believers, have recently asked whether it is not perfectly possible that God’s providence was involved in the outcome of all first century Jewish births – even the man born blind in John’s gospel, King Herod, the butcher, the baker and the candlestick maker – and that apostles are just a special case of God’s provident governance of all events. In other words, they say, whatever apparently contingent events may have accompanied all this, in the end the apostles were apostles because God chose them to be apostles, and that is the only really important issue.

In fact, they wonder what useful content remains in the ideas that births are “random” in any sense, or that apostleship is “natural”, once a provident God is introduced into the picture. Does not divine providence render such ideas empty of meaningful content?

Somehow, the Theistic Natural Apostleists seem to be attempting something like omnivorous vegetarianism. 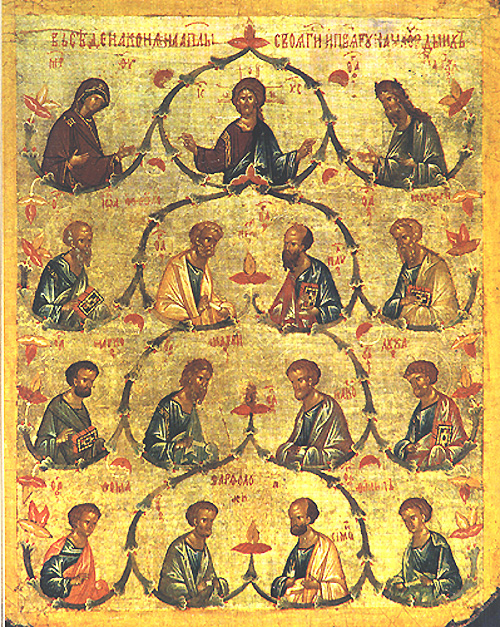 The Apostles – a nested heirarchy