A particularly zealous reader may recall that in my recent piece on the fossil record I raised a question, in passing: “…as an exercise, can you say what in Neodarwinian theory precludes a cyclical, rather than linear and branching, evolutionary process?” Despite claims like Koonin’s (2009) that there is no tendency to greater complexity in evolution, the most basic finding of palaeontology is the overall trajectory from simple (if that word means anything in biology) single celled organisms to, well, humans, or at least higher life-forms. Whether one calls it progress or not, what is undeniable is that it is a trajectory, or rather a branching series of trajectories, which is why it fits into the nested heirarchy model. 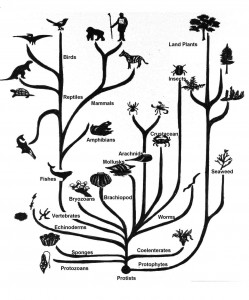 On the face of it, Darwin’s theory doesn’t necessarily predict this overall picture. The environment, after all, has a relatively limited number of parameters. It gets colder, say, and randomly varying species adapt by natural selection. It gets warmer again, and there seems no overwhelming reason why the original variant – already found once in morphospace – should not be preferred and evolution cycle back to more or less where it was before. This would be congruent with the finding that the vast majority of advantageous mutations actually observed have involved loss of function, not new function.

So what provides the “ratchet” that has given life’s history its perceived progression, despite the interruptions of mass extinctions and the more or less unpredictable cycle of overall conditions? The essay I linked to in the previous post has some useful pointers, the one that emerged in the last piece being the overall reliability of the fossil record – there do not appear to be pre-cambrian rabbits awaiting discovery.

There was indeed such a “ratchet” assumed in Darwin’s original theory, based on our old friend, the purely philosophical principle of plenitude. As Benton writes:

Darwin borrowed the principle of plenitude and made it explicitly evolutionary in his analogy of a barrel of apples. In his unpublished Natural Selection (see Stauffer, 1975, p. 208), Darwin compared the present-day diversity of species to a number of apples floating on the surface of a barrel filled with water. The surface is covered by exactly the right number of apples, and it is impossible to add a new apple without displacing one that is already there. Similarly, he argued, each species had been honed by evolution to fit its niche, and if a new species arises, it has to displace a pre-existing species before it can become established. Walker and Valentine (1984) questioned Darwin’s assumption, that all niches are full…

Benton’s analysis shows that, if all the ecological niches have always been full, one would expect the number of taxa overall to level off in a “logistic curve”. As it is, the general pattern (with some explicable exceptions) follows a logarithmic curve, which is indicative of a continued exploitation of empty niches, rather than competition for old ones. The typical “spindle diagram” of evolution illustrates this trend: 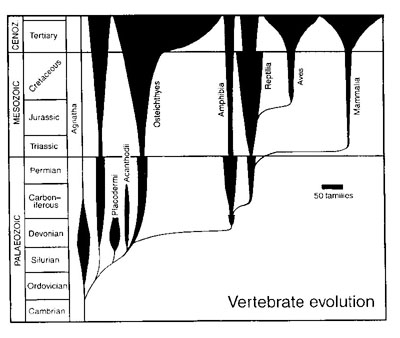 But more detailed graphs for tetrapods and fish give a better picture: 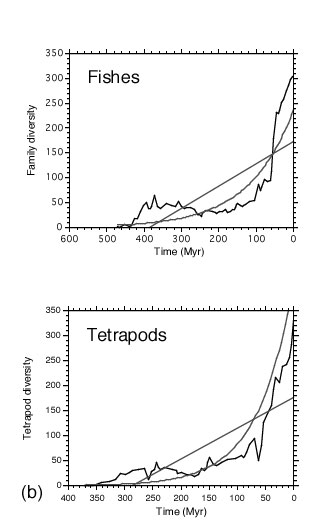 For most of the period, a logarithmic curve fits, and no logistical curve could. Benton considers this reflective of reality:

The question of mathematics vs. basic observations does not arise for vertebrates, since a logistic curve, or series of logistic curves, would be hard to fit to the known patterns of diversification of fishes or tetrapods (Figs 2, 5). The patterns as a whole suggest expansion, and especially rapid expansion over the past 50-100 Myr, the part of the fossil record that is probably better known and better dated than earlier segments.

This is particularly evident, then, in the continued expansion of tetrapod taxa during the Tertiary period to the present. It reminds one of those political arguments that immigation creates new jobs rather than increasing competition for a fixed number. Benton’s more detailed analysis of tetrapod families confirms this trend:

Benton (1996a, b) has carried out a comprehensive census of all 840 families of tetrapods that have a fossil record, and which include more than a single species. He found that 13% of familial origins could be (but need not be) explained by competitive interaction with a pre-existing family on a reasonable estimate. Even using a maximal estimate of possible competitive interactions, where it was assumed that the fossil record was extraordinarily incomplete, the proportion of familial originations that were candidate competitive replacements (CCRs) rose to 26%. In a plot of CCRs (Fig. 7), the distributions of peaks appears to be largely random with respect to time. There is no evidence for a rise in CCRs in the late Palaeozoic or the late Cenozoic, and hence no suggestion that tetrapod niches were filling up at either of those times. This is evidence against a logistic model of diversity increase.

The most obvious reason for this, he says, is that the “big picture” of evolution is not driven by competition, as in Darwin’s “apples in a barrel” expression of the principle of plenitude, but by evolutionary innovation – driven mainly by variation, though of course honed by selection:

Intuitive observations of the fossil record of vertebrates confirm the idea of continuing expansion based on evolutionary innovation. The bursts of radiation among fishes, for example (Fig. 2a), may be related to specific new adaptations, such as extensive armour in ostracoderm agnathans and placoderms in the late Silurian and Devonian, jaws in placoderms and acanthodians in the Devonian, increased swimming speeds and efficiency of jaws in Jurassic bony fishes (and especially the teleosts), expansion of trophic levels in the sea (especially the modern sharks, Neoselachii), adaptations to feeding on specific foods (such as plankton, corals, buried bivalves and echinoderms), and parasitic modes.

So variation fuels exponential growth of diversity, more than does competition for environmental space:

The implications of exponential, rather than logistic, curves of increase in diversity are profound (Benton, 1997b, c; Fig. 6 herein). An exponential curve, allowing for the temporary reverses caused by extinction events, implies that there is no limit to the global diversity that can be achieved, or at least that vertebrates (or life on land, or all life) have yet to approach that maximum global carrying capacity for life.

Another paper, describes how diversification is not a universal property of taxa. Groups that initially show great diversification have a tendency to “run out of steam” and reduce their diversity (as, for example, in the case of the agnatha in the spindle diagram above), or even more commonly after mass extinctions, when typically new groups begin to diversify at the expense of previously dominant types (such as the rise of dinosaurs after the Permian extinction, and of the birds and mammals after the KT event).

Although one could look for detailed explanations for this phenomenon, such as “overspecialisation” (a litle hard to define objectively, I should think), it’s one of those unnoticed mysteries that there always seems to have been an up-and-coming group that has retained the propensity to diversify apparently without limit whilst the dominant types were losing it. One would suppose that life as a whole might have easily have run itself into the ground in the same way and, and evolution gone back to basics or reached stasis, or gradual decline.

It’s also, on consideration, odd that this “relay race” of diversification continues to follow the observed trajectory towards greater sophistication, if not complexity, especially given the suggestion that there were plenty of “niches” to go round. Mammals did not “out-compete” reptiles in the Tertiary, but simply had a capacity for diversification which, it seems, the once inventive reptile groups had lost.

Ratchets are teleological devices. On the small scale, natural selection is a good ratchet to optimise adaptation to the environment. If Darwin’s “apple barrel” competition model obtained throughout the history of life, natural selection would also make a plausible mechanism for the “progressive” trajectory of life, which was certainly the teleological element in Darwin’s own worldview.

But if Benton’s assessment is correct, there is another ratchet built into the large-scale process of evolution, which does not depend primarily on selection, but on the nature of variation. Even more mysteriously, it appears to be a ratchet that operates across different taxonomic groups at different times, yet still producing the sense of overall direction that Darwin found so compelling, and which most biologists take for granted.

On the models permitted within the “consensus” view of evolution, what doesn’t occur by selection occurs by neutral drift. Methinks there may be dragons hidden in that neutrality.