More on mind and randomness

Just as Dennis Venema failed to reply to my serious questions about randomness on his BioLogos post in October, so also Darrel Falk abandoned any reply to my questions on his concept of randomness on his. Ones respect is bound to flag in the face of such determined non-interaction. Both propose a vaguely fuzzy idea that God can achieve his purposes through randomness, without saying anything specific either about what that randomness might be, or about the nature of God’s purposes. I conclude it’s yet another theistic evolution idea that depends on rhetoric rather than intellectual rigour, which is disappointing.

Yet, as this book extract shows, randomness in relation to evolutionary theory was being discussed at a much deeper level than that at the very start of the theory – and this book, at least, suggests that much of Darwin’s apologetic method was intended to “smuggle” a random process past the opposition of those who realised its implications for theism. And that was not simply the Bishop Wilberforces of the world, but those like Asa Gray and Charles Kingsley (inaccurately cited by Falk as amongst those happy for God to work through randomness) who openly opposed Darwin’s view on this, as of course did his co-theorist Alfred Wallace. Where is theistic evolution’s historical compass? I regret it’s in the same bottom drawer as its philosophy.

But meanwhile, there’s a link in this randomness thing to the kind of concept of knowledge as primarily and necessarily arising from mind, that I was examining in my two posts on musical “swing”.

In them, I demonstrated swing to be a definite auditory phenomenon which nevertheless cannot satisfactorily be reduced to theory, but only experienced directly and holistically. Furthermore, it has to arise in the mind before it can be perceived in the music. The book I’m currently reading on Goethian science, by Henri Bortoft, uses a visual example (far easier in a book!) to the same effect of showing that there is no “meaning” to perceive in nature apart from mental theory. Illusions, by bypassing the perceptive assumptions we’ve had since childhood, are good illustrations. 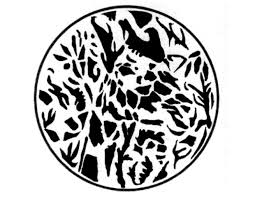 This is one picture he uses. Initially one sees only a random collection of black blotches. At some stage one perceives a giraffe amongst vegetation. And, as Bortoft points out, once that step is made, the picture is “giraffised” for you, and you can’t see it as anything else. You see a giraffe, or not – there is no possible intermediate state. And so you experience the giraffe only holistically, not by any building of knowledge from the picture.

The fascinating thing is that, in this case, no giraffe is there at all (beyond even the usually forgotten truth that even if it were not cryptic, it would only be a symbolic giraffe – your dog wouldn’t see an animal on the paper). Because it was painted, not photographed, there never was a giraffe, at any stage. The picture remains, as it always was, just a collection of disconnected black shapes, scattered apparently at random as far as any image-recognition software is concerned. There’s nothing to distinguish a particular mark as part of the image except by the whole image – and that’s an imposition of your mind upon the image. 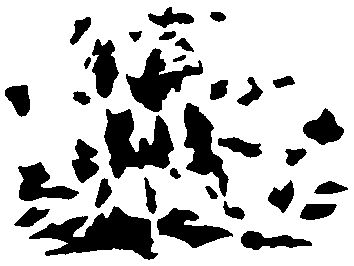 Actually, there are better examples than this one, because more obviously cryptic, such as this. But like the giraffe, this is not, despite appearances, a Rorsach set of random marks to detect personality types by their imaginative invention. In both cases, though there is no actual image on the paper, the impression of an image is quite intentional on the part of the artist. I’ll let you go mad as you try to connect with the maker’s meaning in this last case – but once you do, by the same sudden intuitive insight, you’ll have seen not a fanciful face in the clouds, but something real. It’s a strange thing that two minds can share a reality via a medium from which the reality is actually absent.

Now, until you do make the conection, the ink marks appear random, and in terms of statistical likelihood and order they are – but finding the meaning changes that entirely. It would be crazy talk to speak of the artist “using randomness” to achieve their purpose of showing you a giraffe or … the other thing. The picture is not random at all if it was planned and executed for a purpose. The randomness is purely epistemic, and not because it cannot be mathematically ordered, but because of a lack of direct, holistic human insight. The non-randomness is known simply because the mind imposes a genuine meaning on the randomness, revealing its underlying order and purpose.

I woke up last night with an inconvenient flash of insight that an even richer illustration of this principle is those “Magic Eye” pictures popular in the 1990s, such as this:

One could analyse such a non-pattern for ever without spotting the order. In fact, if you happen to have one eye you’re also in for a long and unsuccessful research program. My delight (given my train of thought) was great when I discovered that the correct name for such figures is “random dot autostereogram”. But whoever named them seems as woolly in their concept of randomness as the BioLogos crowd, for the dots are anything but random.

A helpful article at Wikipedia gives away the secret, and it involves a computer algorithm to manipulate an underlying pattern to implant stereoscopic infomation therein. The pattern, then, in its totality, involves human purpose. Human stereoscopic perception, loaded with both the advice to squint and the visual theory of a lifetime, unlocks that pattern directly and holistically. And the knowledge of purpose comes quite simply from the presence of a perceptible image, and is as reliable an indicator as any “real” perception of our vision.

In fact the only illusion around is the illusion of randomness, which as Bill Dembski so insightfully writes, is simply a pattern we’ve not yet comprehended. One thing I didn’t know before is that it’s quite possible to produce moving stereograms, like this one:

What is perceived before we “get it” is a series of stochastic changes occurring through time. Once we see it we see there is a series if bullseyes changing purposefully, which is quite enough to refute the stochastic initial impression. This is just an animated gif. Supposing instead that the changes we saw were ongoing in chemical bases over several billion years, and the associated pattern were the orderly progression of the household of life during the history of earth?

Could that in any sense be described, by a theist, as “God working through random changes”? Of course not. It would simply be a strong indicator that we should abandon the concept of randomness altogether – on the basis not directly of belief in God, but on the very evidence of organisation itself. After all, DNA is a digital code, and it’s perfectly possible to produce even humble autostereograms using letter codes:

28 Responses to More on mind and randomness