My attention was caught by a piece about a New York guy, Jonathan Basile, who has tried to “create” an online instantiation of the fictional Library of Babel imagined by author Jorge Luis Borges in a fantasy tale of 1941. I’ve mentioned Borges before in a reference from Michel Foucault’s book, or else I confess I’d never have heard of him, still less read him.

The Independent piece quotes an academic who says:

…it is The Library of Babel that “most sums up [Borges’] view of the world”.

The author believed the universe was too big for any one person to understand, “and any attempt to fathom the world will lead to disappointment, disillusionment and even madness”.

The story envisages a universe which is an infinite library of 410-page books, using a standard character set, created entirely randomly. So, although the vast majority of the books are gibberish, logic dictates that amongst them exists every possible book, including those explaining ultimate meaning. These, Borges writes, are the most sought after, and undiscoverable, books apart from those that are about the individual reader. Wikipedia explains:

Despite — indeed, because of — this glut of information, all books are totally useless to the reader, leaving the librarians in a state of suicidal despair. This leads some librarians to superstitions and cult-like behaviours, such as the “Purifiers”, who arbitrarily destroy books they deem nonsense as they scour through the library seeking the “Crimson Hexagon” and its illustrated, magical books. Others believe that since all books exist in the library, somewhere one of the books must be a perfect index of the library’s contents; some even believe that a messianic figure known as the “Man of the Book” has read it, and they travel through the library seeking him.

It appears that Jonathan Basile’s online version is being generated by some basic randomisation algorithm, and to give the idea here’s one book I selected at random.

It seems to me this whole thing is a pretty graphic teaching-aid for the concept of the materialistic paradigm of the universe as an Epicurian system in which entirely chance events have produced whatever order we find now – including, of course, life. Basile’s online idea would actually seem to have a fundamental flaw, in that any random-number algorithm he uses is actually an ordered system designed to simulate patternlessness. So it ought to be impossible for it to produce, for example, the book in Borges’ story that repetitively spells out “MCV” for 410 pages. That just shows how hard it is, in our real universe, to generate true chaos.

More fundamentally, though, the central imaginative concept interacts with information theory, probability theory and similar concepts like specified complexity that have engaged, amongst others, Intelligent Design theorists. If we treat Borges’s absurdist scenario seriously for a while (it was, after all, allegedly representative of his true opinions), he has clearly completely underestimated what a truly random universe would be like. It is presumably the occasional discovery of readable books amidst the jibberish that encourages his fictional readers to look for those that are important, and drives them mad. If, as I have no doubt is, and will continue to be, the case in Basile’s online library, every book were completely unintelligible, nobody would continue exploring them for information.

In fact, his premise is entirely predicated on infinity – for only in an infinite library would every possible book be sure to exist. Our own universe is very far from infinite – which makes it a matter for amazement that it contains the general order it does (at the level of mathematical intelligibility, etc), and areas of massive order like our world, including in particular many huge libraries in which every single book is packed with meaning.

But true chaos does not only require an infinite library for any meaningful books to exist on its shelves. It also requires infinite search resources to make the finding of even one of them remotely likely. Come to that, it is vanishingly improbable that such a random universe would contain people capable not only of understanding the written word, but of searching any significant fraction of the library. That Borges’ story contains such readers, and such comprehensible books as they actually discover, is remarkable and requires explanation, and an indicator that his library-universe was never really random to begin with (as if the highly formal architecture of the place didn’t already give the teleological game away).

The other Achilles’ heel in the plot is that, knowing already that all books in the library were generated randomly, his fictional readers already know that no book they find can be relied on to provide any objective truth. For example, if one of them were to stumble on the book of his own life, he would require his own existing knowledge to confirm that it accurately described himself or his past, and he would then have no warrant whatsoever to believe that anything new he read – his future, or the secret opinions of others about him, for instance – had any bearing on reality.

So it’s worse than the library’s denizens seem to appreciate (as far as I can tell having not read the story): it’s not that they can’t access the truths they want to know but can’t find in the labyrinth, but that they can’t access any truth at all. Even the books in plain English are, because of the very fact of their random origin, gibberish. They would be like the nonsense postmodernist essays generated by another website (it’s no coincidence that there is a close link between Borges’ philosophy, postmodernism and nonsense essays).

This whole exercise illustrates the explanatory futility of Epicurean naturalistic materialism. If truly random (ie not statistically patterned) chance is at the root of the universe, or the multiverse, or the quantum vacuum, or whatever ateleological entity you you choose to ground your being upon, then any order you observe in your part of it is, by definition, actually gibberish and illusion. It teaches you nothing that isn’t immediately contradicted by everything else in an infinite random cosmos. Borges’ book of endlessly repeated “MCV” sequences is no more ordered, even locally, than a sequence of identical digits in pi would be.

If, however, as is the clear case in our corner of reality, you never observe any of that further, chaotic, universe, and instead find order wherever you look – that is, your accessible portion of library is without exception full of readable books – then you have no grounds for believing in an infinite random universe at all. And you have the additional problem of explaining why every book is not only readable, but conveys coherent meaning. You also have the small matter of explaining how you came to exist and are able to fathom this meaning, and how your hypothetical chaotic library came to be structured in orderly hexagonal cells of identically-sized books at all.

Whatever Borges’s authorial intentions were in writing The Library of Babel, it actually fails to describe any possible reality at the metaphysical level. This is partly because it is logically impossible for order, even local order, to arise from true chaos. But it’s also because you need an author even to create absurdity. 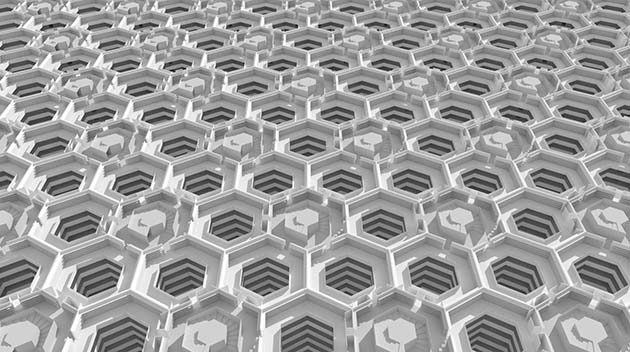 2 Responses to Infinite libraries without books