One man went to mow a meadow…

…but he didn’t, or at least not yet. Our small piece of Devonshire hillside has acted as a one-and-a-half acre paddock for a couple of ponies since we moved here. The basic management has been to use the lower (damper) part in summer, and the drier upper part in winter, strip grazing both in as convenient a way as possible, mowing the unused bits if and when they get too long. It’s good exercise to walk a mower up and down a steep hill.

The larger pony went off to a new career last year, and our small Welsh grey has unfortunately contracted laminitis and spent much of the summer confined to quarters. This combination of circumstances has somehow resulted, this year, in the upper paddock becoming a mass of wild-flowers, with not a lot of grass to be seen. With no pressure to prepare it for grazing, I’ve now decided to manage it actively as a wild-flower meadow, and the result on the local ecosystem has been remarkable. 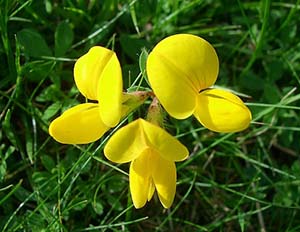 The dominant species earlier in the summer was birdsfoot trefoil, a low yellow plant colloquially known here as “egg and bacon plant”. I heard on the radio that around 135 animal species depend on that plant for a livelihood, and it wasn’t hard to believe seeing the variety of beetles, burnet moths and common blue butterflies found on it. But the environment really came into its own when the birdsfoot trefoil seeded, and tall purple knapweed took over. 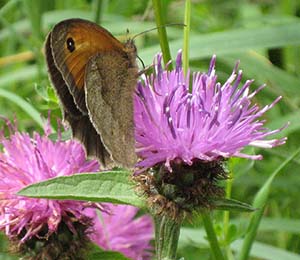 It was then that I decided to delay mowing, because walking through it on a sunny day sent veritable clouds of meadow brown butterflies into the air. It’s said that, with loss of habitat, insecticide use and so on, Britain now has only one butterfly for every twenty found in Victorian times. In June my field was a reminder of those pre-industrial days. The meadow browns made up in spectacle for what they lack in colour, but other species 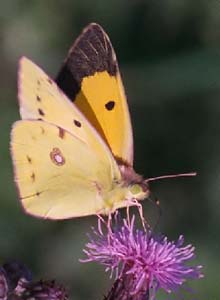 made that up – skippers, speckled woods, gatekeepers, the odd tortoiseshell, red admiral, silver-washed fritillary or peacock, and exotic mediterranean visitors like clouded yellows (the first of which I saw only last year) and marbled whites (a first for this season). Recently came other whites, small coppers, painted ladies and second generations of blues and brimstones.

Butterflies were, although obvious, just the most noticeable feeders on knapweed. A few minutes spent nosing around would show unusual species of beetle like the yellow longhorn, and numbers of different species of (endangered) honeybees, 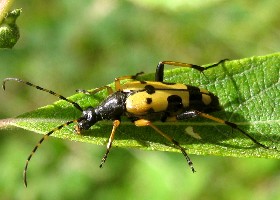 solitary and parasitic bees and bumblebees, all thriving on a relatively large area of free nectar. On dewy mornings a range of different spiders webs showed what was happening further up the food-chain. Careful observation showed our lizards, slow-worms and frogs doing well too. 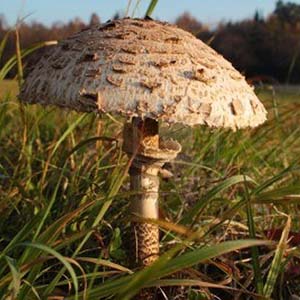 Plenty of other plants thrive amongst the market-leaders, like mallow, yarrow, fleabane, various composites and even an isolated orchid or two.In the part most recently vacated by the pony we found a fairy-ring of delicious field mushrooms, and I expect our usual crop of gormet parasols when the autumn weather is next suitable.

Amongst the mammals, the field made good browsing for our roe-deer family. The rabbits, of course, did (too) well, and the odd patch of fur, and tracks through the knapweed showed that the foxes did all right as well. 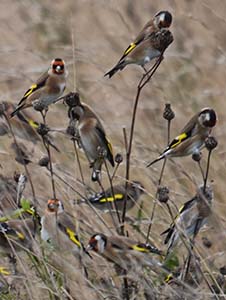 The increased insect population this summer has enabled our pair of swallows, which nested in the stable for the first time last year, to produce no less than three broods, now getting their visas organised to fly to South Africa any day. And just as the knapweed began to go to seed, and I was getting round to mowing it to maximise seed-distribution for what I hope will be an even better season next year, a charm (as it is called) of about thirty exotic-looking goldfinches has taken to harvesting the seed in a systematic way.

Meanwhile, the creatures that were doing fine even before we had a proper wild meadow haven’t been any less prosperous – the family of crows, the jays, the visiting woodpeckers, ravens, buzzards and kestrels, the other passerines, the wasps and hornets, the badgers, shrews and mice and so on and so on. 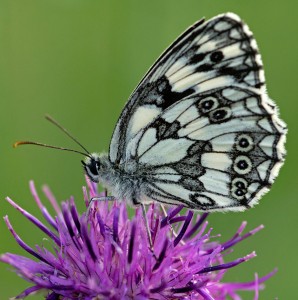 Now if I were more of a naturalist I’d spend every day out there surveying the range and frequency of every species I could. What I’ve described is just what presents itself to the senses strolling across to empty wheelbarrows or cut down nettles (only I didn’t this year because the nettle patch had become peacock-caterpillar city too). In a way it’s an unusual environment – the working land round here is mainly well-grazed sheep or cattle pasture, the well-to-do residents keep horses on their paddocks at high density and cultivate their gardens in the English (ie fanatical) way. Any untended ground soon returns to bracken, scrub and oak, hazel and ash woodland (each with their own different multitude of dependent species). So my accidental wildlife meadow arose entirely from low-intensity grazing, though I shall now endeavour to optimize it by judicious mowing. It’s a reminder of just how abundant nature can be, with just the right amount of human management – and a herbivore population.

It puts me in mind of calls I’ve heard recently, from the vegetarian end of the Green movement, that the world should stop eating meat and switch to an entirely vegetable diet. Herbivores, they say, produce relatively little food per acre, and add not only carbon dioxide but tonnes of methane to warm up the atmosphere.

But can you imagine my grazed meadow either turned over to cerials (especially Mr Monsanto’s Special Cerials with added Roundup) or (being geologically on pretty marginal Cretaceous greensand) allowed to return to unproductive forest? Agriculture, especially in today’s technological climate, is all about monoculture. It’s why wildlife disappears from the land in the first place.

So I say huzzah for steak-and-kidney pie, lamb korma, alpaca wool and even Hooray Henrys keeping their hunters in the Devonshire hills. It’s herbivores and their unfashionably inefficient owners that will save the planet, not the vegetarians!

Training in medicine (which was my career), social psychology and theology. Interests in most things, but especially the science-faith interface. The rest of my time, though, is spent writing, playing and recording music.
View all posts by Jon Garvey →
This entry was posted in Creation, Politics and sociology. Bookmark the permalink.