Looking for autonomy in the Bible

I was gratified by the comment made by Jay Johnson recently, apparently concurring with me that some commonly voiced positions in “Evolutionary Creation” present a significantly different view of God from that historically associated with Christianity:

Many so-called Christian understandings of evolution are based more on philosophical reasoning than on anything resembling a biblical concept of God.

The key area in which this fundamental departure from historical doctrine occurs is in the broad idea of “autonomy”, as applied to the non-rational creation. For Jay, and other recent, forgetful or just masochistic readers, I’ll link to some previous posts, as this is an area on which I’ve expended much ink over the last few years. To scratch the surface, this piece examines how such “freedom” is defended by Karl Giberson and Darrel Falk, both former leaders of BioLogos (Giberson in a book co-written by Francis Collins, who founded the organisation). This article discusses the same doctrine in an analysis of the views of John Polkinghorne. And this, more philosophical, piece shows the theological necessity for a view of concurrence in which secondary causes operate within, not autonomous of, the determining creative will of God… this being thoroughly compatible with any particular permutation of evolutionary theory.

Today’s task is simpler. If the Christian God’s character really is the kind of self-emptying love that delights most to make his creation free to co-create itself, to be fully-gifted, to operate on a Robust Formational Economy Principle and so on, then that will be seen working itself out at all levels of Scripture, yes? So here is a Scriptural survey – or rather, the laying out of some categories by which you can conduct your own survey with whatever concordances you have to hand – of how created things relate to the active will of God. In other words, how highly does the Bible rate autonomy and “creaturely liberty”? 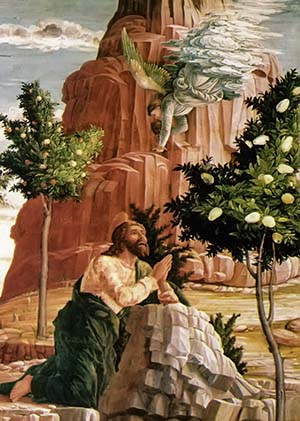 But we’ll start at the top (and work down) from the Uncreated – the Lord Jesus, who is both the eternal Begotten of the Father, and our human model and Lord. If the conferring of autonomy is the Big Thing on God’s heart, then we ought to see it supremely exemplified in the Son, who is by nature equal to the Father. Instead, the very passage used to establish God’s propensity for self-emptying, Philippians 2, shows Jesus becoming “obedient to death”. And, as the Gethsemane discourse shows, that death was a cup prepared for him by the will of the Father, which Jesus willingly, if reluctantly, embraced. “Thy will be done, on earth as it is in heaven.”

Neither was this submission to the Father’s will made merely on the part of the incarnate “human” Christ. Hebrews quotes Psalm 40 to explain what Reformed theology would call the eternal covenant between Father and Son:

Therefore, when Christ came into the world, he said: “Sacrifice and offering you did not desire, but a body you prepared for me…”

For I have come down from heaven, not to do My own will, but to do the will of Him who sent Me.

You may look for counter-examples affirming the autonomy of the Son from God the Father, but I’m confident you won’t find them in the Bible. In my view that ought to clinch it – if the supreme example of relationship to God is obedience to his will, then surely that would be the principle by which God creates all things. 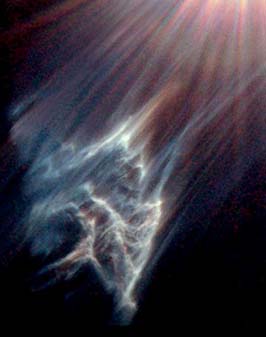 But perhaps what is true within the Godhead is not so of created beings? Well, if we’re going to speak of the most glorious of God’s creations, we should think first, perhaps, of angels: they are powerful spiritual beings – according to the scholastic philosophers pure intellect – who would surely be granted freedom above anything else in creation? But actually, their complete commitment to God’s purposes (if we discount the sin of fallen angels) is so pervasive in Scripture we scarcely notice it. We take it for granted that if an angel appears to Daniel or Mary, it has been sent on the errand by God. The Pentateuch’s tendency for God’s angel to speak as Yahweh in the first person doesn’t really surprise us. And when people are tempted to worship these glorious beings, as in Rev. 19.10 or 22.9, their reply is not only that only God should be worshipped, but that the angels are merely fellow-servants. In fact Hebrews 1.14 tells us that all angels are ministering (on God’s behalf) spirits who serve the saints. 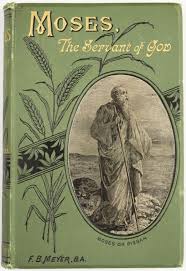 Below angels are human beings – the one physical creature of whom we can unequivocally speak of “free will”, and from which the misleading analogies within “free process” evolution all arise. But, in God’s purposes, is that “freedom” to be seen as autonomy? “Simon Peter, a slave and apostle of Jesus Christ…” “Paul, a slave of Jesus Christ, called to be an apostle and set apart for the gospel…””James, a slave of God and of the Lord Jesus Christ…” “Jude, a servant of Jesus Christ and a brother of James [and probably Jesus]”… you can, of course, trace that servant language through from Abraham, through Moses, David and the prophets, through to the servants of Christ for whom, John says, his revelation was given.

Of course, we have only to recall the Genesis creation account to remember that mankind was created to rule the earth on God’s behalf, and that Adam was created to work and tend God’s garden – and was held accountable for his disobedience in that role. Augustine wrote (and Cranmer carried the thought into the Anglican liturgy) that God’s service is perfect freedom – but that was before the Renaissance made made man the measure of all things.

The animals could scarcely, in principle, be supposed to be more autonomous than mankind. And indeed, we find in Scripture their utter dependance on God (eg Psalm 104), their obedience to him in their habitual natures (eg the animals described in Job 39-41) and even their use as agents of God’s governing will (such as the wild animals sent as punishments in Lev 26.22, the bears that killed the youths who accosted Elisha in 2 Kings 2, Balaam’s ass, Elijah’s ravens and so on.

The wildness of animals is sometimes represented in “chaos” contexts (for example the serpents of Genesis 3 or Acts 28.4-5), but not as automous “free” agents. Even the fish in Jonah – a leviathan of the primordial ocean, if you like – serves God’s salvific purpose for the prophet, and is, indeed “provided” by Yahweh for that very purpose. 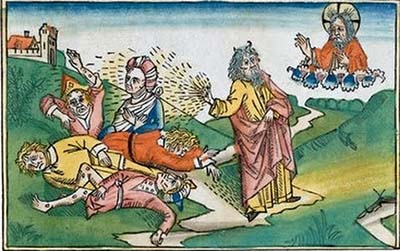 The example of Jonah is a reminder that plants, too serve his will – the gourd that sheltered the prophet in the same book is just one instance. But right down the evolutionary scale living things serve God’s will – remember the insect plagues of Egypt (designed, in part, to show God’s sovereignty over the natural realms ruled by Egypt’s main deities). And there is scarcely a bacterial plague mentioned in the Bible that isn’t sent as a judgement of God.

Well, at this point we slip off the evolutionary scale to the inorganic world where, of all creation, “freedom” has least meaning (“Stone Free” and all that). Yet it is here where the “Robust Formational Economy Principle” (that’s Howard Van Till’s term, by the way) is most invoked with respect to evolution. For the scientific understanding informing it is, in effect, not the autonomy of living organisms to create themselves through evolution, but the autonomy of mere chemistry to produce the random mutations that organisms passively undergo, or even the autonomy of asteroids wandering in chaotic orbits to change, “freely”, the course of history. Such is the underbelly of “co-creation”.

Yet we have to look no further than Psalm 104 to learn that:

The Lord wraps himself in light as with a garment;
he stretches out the heavens like a tent
and lays the beams of his upper chambers on their waters.
He makes the clouds his chariot
and rides on the wings of the wind.
He makes winds his messengers,
flames of fire his servants.

And also, in that psalm alone, a whole lot more of God’s active management of nature.

Now, the citations I have made are not proof texts. You will find obedience to God’s will in virtually any passage that mentions Christ, or angels, or humans (even in many cases of sin, where Pharaoh or Judas fulfil his purposes even in their rebellion), or animals, or plants, or inanimate nature. This is simply the view of God, and his dealings with creation, taught by the entire Bible. If it is the foundation of creation doctrine, it is also the basis of salvation doctrine: for we are to be restored from disobedience to obedience through the blood of Christ.

The only possible exceptions – apart from sin, in which “autonomy” is, of course, not a blessing but an aberration – are those passages in which natural forces are represented in “chaos” terms – the tohu wabohu of Genesis 1.2. Examples might range from the “unclean” animals of the wilderness in the law, through to the storm that Jesus rebuked, or the one that shipwrecked Paul. In many cases these are only recorded in order to show God’s sovereignty over them, but that apart there is a fundamental conceptual difference between the “chaos” theme and “nature’s dignity through autonomy from God.”

And that is that, in Genesis, “chaos” does not represent the highest good of “freedom” built into creation, but the incompleteness of God’s creation (bara), creation being entirely to do with ordering things to his will and purpose. In Genesis 1 the wild deep is progressively pushed aside to make room for sky and earth: it represents what has not (yet) been ordered – perhaps with the implication that the completion of its submission to God might be part of the remit of man in “subduing and ruling” the earth.

For the upshot of all is that the final goal of creation is not emancipation from God, but that God should be “all in all” (1 Corinthians 15.28). Whatever is represented by creation and its groaning in Romans 8 (and I make some suggestions here), what it is groaning for is “the glorious freedom of the children of God”, which if the examples of Jesus and the apostles are our model, is to be willing slaves to the perfect will of the Father. Autonomy it is not.

Let me put it as strongly as this: there is no principle of autonomy in Scripture, regarding any part of God’s creation, except for the usurped autonomy of sin. And even that is not, in the end, exempt from his providence that “works out everything in accordance with the purpose of his will.” And if such teaching is not to be found in Scripture, then as Jay observes, it’s based on philosophical reasoning, or perhaps rather:

…hollow and deceptive philosophy, which depends on human tradition and the elemental spiritual forces of this world rather than on Christ.

Or to quote Jesus (citing the authority of the prophet Isaiah), its proponents are “teaching as doctrine the precepts of men.”

If that is not true, then someone will be able to assemble for me a body of teaching on “the full gifting of creation” from Scripture. If not, then the foundational doctrine of Christianity – the doctrine of God himself – is being widely misrepresented nowadays. The seriousness of that far, far outweighs whether those who propose it are right to believe in evolution or not. 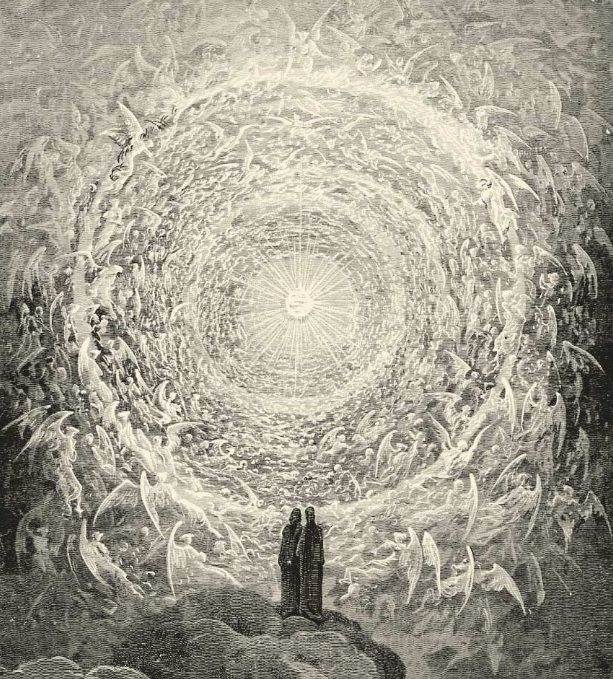 19 Responses to Looking for autonomy in the Bible