Over the seven years of The Hump I’ve dabbled in Aristotelian and Thomistic philosophy, mainly for the reason that it deals with intuitively obvious matters such as purpose, and form, to which conventional science (and therefore most theistic evolution) is completely blind. It also deals with divine action, providence, chance and so on in a way that makes the discussions of many Evolutionary Creationists seem frankly half-baked.

My study of Aquinas is therefore pretty superficial, though based at least on using his own writings as well as work by those like Ed Feser, perhaps the most prominent of the modern “analytic Thomists”. Even so, I’ve noted in a couple of posts here and here how the sympathy of people like Feser for theistic evolution, and their corresponding dislike not only of Intelligent Design but the whole field of natural theology (which strictly speaking ID is not) seems at odds with ideas that are both clearly and commonly expressed in Aquinas. The same has been remarked upon by fellow Hump writer Edward Robinson, whose own academic training was in classical philosophy. 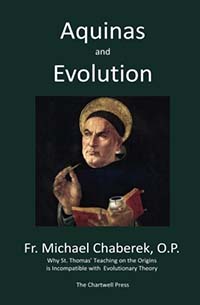 The new book by Thomist scholar Fr. Michael Chabarek, OP, Aquinas and Evolution, makes the same case but in careful detail, in essence showing why in this respect perhaps a majority of modern academic Thomists are untrue to Aquinas (and he includes some plausible sociological suggestions as to why that might be).

Broadly, the first half of the book discusses in detail why theistic evolution, as currently understood, is in fact incompatible with Thomistic thought, and the second half why Intelligent Design theory, contrary to the common claim, is compatible with it. In so doing he takes care to define his terms better than most, and to keep carefully in mind the distinctions between science, philosophy and theology in the positions he discusses (of course including atheistic evolution too), and where they and others who write about them muddy those distinctions.

The book gave my own understanding of biological origins some problems. In particular, having defined evolution (and especially theistic evolution) by choosing from at least four definitions used by others, the criteria of (a) universal common descent and (b) the absence of any need for supernatural activity of God in it, he appears to conclude that any transformation of species, even by God, is ruled out by the nature of … natures. Aquinas clearly concludes that “natural substances” such as species must be the direct work of God as sole Creator, without secondary causes.

My problem is largely solved when one remembers that the author’s appointed task is the compatibility of evolution with Thomas Aquinas, rather than the question of origins itself, and (as he says later on) Thomas could, of course, be wrong, as he was undoubtedly wrong on many scientific matters in retrospect, because he usually accepted the current scientific consensus.

But the thing about Aquinas is that so much of his philosophy is clear logic based on common-sense, just as his theology is clear deduction from Scripture. So dismissing his position on something tends not simply to be disbelieving a dogma, but challenging reason – one needs to provide better reasoning to make ones case against him. In this case, Chabarek argues that the impossibility of transformism follows

under three conditions: first, we understand and accept the principles of classical metaphysics; second, we understand notions such as “God”, “creation”, “nature” in a classical Christian way; and third, we accept moderate realism as our epistemological position.

Thomas did all three, of course – but many of us ordinary Christians do so too, perhaps without realising it, for example simply by accepting that there are real species, or even a real “human nature” which participates both in sin and the possibility of salvation. I’ve been aware of such problems with evolution myself, as have other philosophers assessing Darwinian theory such as Étienne Gilson. The fact that so many evolution-friendly writers ignore them, though, doesn’t mean they are insignificant, and it’s good that Chabarek forces them upon our attention and makes us think.

The book is worth reading, therefore, in pointing out problems in popular positions even apart from Thomas Aquinas himself, in whom non-Catholics may feel they have little invested. If chance (which is by definition ateleological) plays a role in Creation, then how can nothing produce something intentional? Likewise, if the course of evolution (particulary respecting mankind) is said to be “frontloaded” into the ordered laws and random events of the world, there is nowhere in the universe for the necessary information about the future state to be carried: as Aquinas said, even God cannot do the logically impossible. Chabarek’s section on the irrationality of saying that “God can use evolution” is (as they say) alone worth the price of the book. It’s a challenge to thinking through ones ideas, and to addressing more critically the usual “memes” like the “God of the gaps”  critique, which (as he points out) logically excludes a priori all belief in God’s creation of the universe and every miracle, and so is an absurd argument for any Christian to use.

One smallish point that I appreciated greatly (and will develop a little here) was just how much ones view of the scientific data itself is altered by permitting the possibility of a supernaturalist view of speciation (Chabarak’s own position is progressive creation) to challenge ones inbred naturalistic presuppositions. For example, evolution of all stripes demands one degree or another of gradualism, whereas progressive creationism would suggest species are static until they are suddenly supplemented, or replaced, with new ones. Now, which of those two matches the fossil record? More on this below.

To satisfy my curiosity I’d have liked to seem him deal more with the broad scientific picture of life’s history – if species are created progressively but not transformed from ancestors, why do we see the logical higher taxonomic transitions such as those from amphibians to reptiles to mammals and birds? But he’s not a biologist, and that wasn’t in his brief to expound Aquinas.

In any case, the more I consider things, the more I suspect that maybe that historical progression isn’t as simple as it seems – there are after all, in this “age of mammals”, still twice as many reptile species as mammals, and specialist gliding mammals have been found back in the dinosaur era, when we customarily imagine only burrowing shrew-like mammals skulking in their shadows. Perhaps here, too, we see only what the prevalent naturalistic worldview wants us to see. Look for example at this typical schematic entitled “Adaptive radiation of cenozoic mammals“: 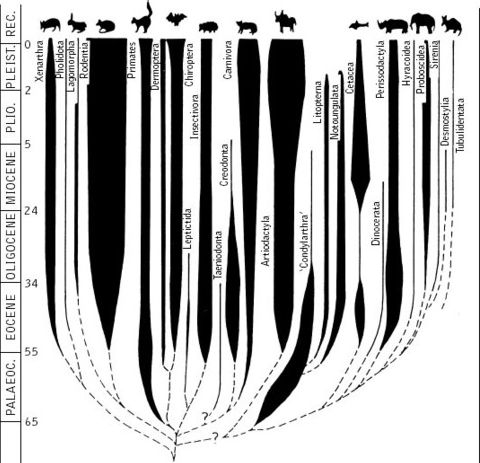 Have you ever noticed that both the “adaptation” and the “radiation” are entirely hypothetical? The data actually shows two entirely new and disparate groups appearing out of nowhere at 65m years, and nearly all the rest arriving more or less simultaneously 10m years later and continuing to the present. All the divergences are conjectural dotted lines, the bush-like shaping of the rest being artistic licence. This is perhaps seen more clearly in a second example, the phylogeny of reptiles, scanned from The Illustrated Encyclopedia of Dinosaurs, by David Norman: 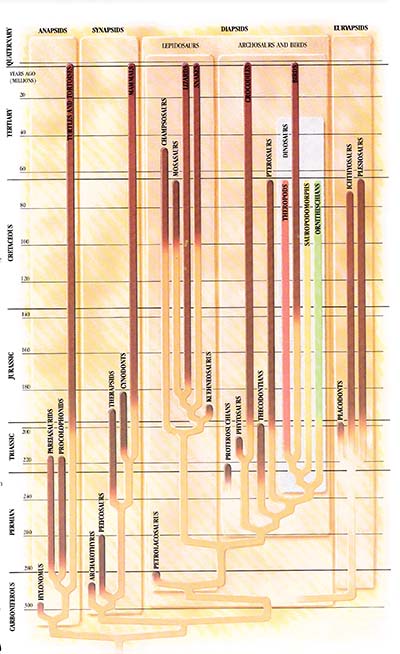 The space-saving format avoids the tree-illusion, and again every one of the divergences is conjectural: each group actually appears fully-formed and continues to extinction or the present. Check it out for any taxonomic group in which the diagrams distinguish actual species from “bootstrapping” to evolutionary assumptions. Here’s one for bony fishes: 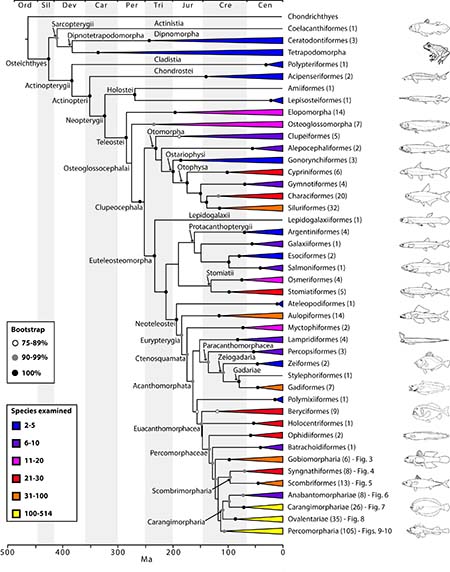 And one for insects, in which everything in red is theory, which not only outweighs the blue facts, but provides the entirety of the impression of branching: 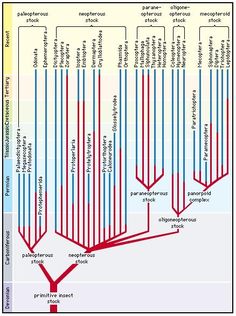 And another for birds, with more seductive curves masking separate vertical lines in the actual fossil record: 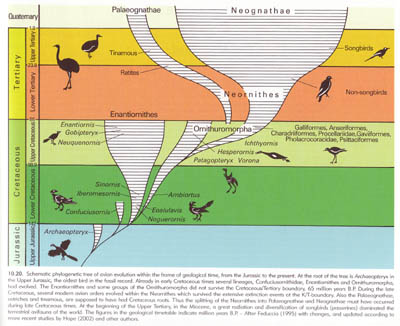 You might have fun looking for similar illustrations of any other higher taxonomic group in creation – though the pattern isn’t radically different in lower taxa, either. This “extract” from the bird diagram is from a study of the mitochondrial relationships of one family, the rails. That too shows parallel lines with bootstrapped “probable” relationships based on the theoretical assumption of common ancestry: 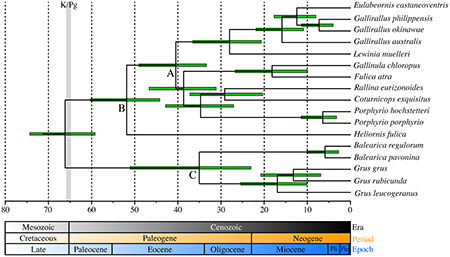 It even works for plants – this actually comes from a page entitled (in Darwin’s own words) Abominable Mystery: The Origin of Flowers and the History of Pollination. That page updates the problem in the light of the latest theory, but note that it’s still about rearranging the red dotted lines. Whichever taxonomic group you look at, it’s a genealogy constructed on perceived similarities without a single official birth certificate! 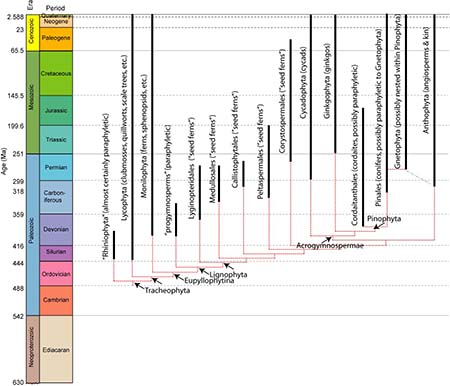 2 Responses to Aquinas on Evolution