I’ve just finished Seth D Postell’s 2011 book, Adam as Israel: Genesis 1-3 as the Introduction to the Torah and Tanakh, which although perhaps a little scholarly (ie interactive with the “academic literature”) for the average reader is a great eye opener in considering the whole question of understanding the first chapters of Genesis. 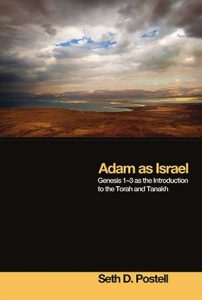 The book benefits from, and furthers, a very healthy trend in recent biblical scholarship to abandon a rigid Victorian theoretical paradigm, the “Documentary Hypothesis” and its descendants, which built an entirely new, and almost entirely speculative, construction on the meaning of the Bible and the whole history of Israel. Instead, the aim is now increasingly to concentrate on the text we have as an intelligently authored literature, rather than dissect its hypothetical sources. Maybe that needs to be done in other fields, like biology, too.

In this case, the realisation is that Genesis 1-3 (in particular) do not stand alone either as disparate fragments of lost traditional myths, nor as educational treatises on how the world or humanity began, but as the introduction to a specific book, Genesis, which is itself the introduction to a larger work, the Torah (or Pentateuch to us) which is the foundation-text of the Hebrew Bible, traditionally ultimately from Moses’s hand on the border of the promised land.

More on that anon, but Postell (a Messianic Jew himself) also makes a persuasive case for saying that the final version of the Torah was also consciously part of the final form of the whole Hebrew Scriptures, or Tanakh (which were usually arranged as “the Law”, “the Prophets” and “the Writings” ending with 2 Chronicles), presumably at some stage after the Babylonian exile and by someone with the kind of knowledge and authority of an Ezra. In other words, we ought to be open once more to the idea that the Old Testament is a book with a theme, not just a library of ancient Israelite musings about their God. Postell leans heavily on the excellent work by John Sailhamer here.

That overall theme is clearly foreshadowed in the Pentateuch, and comes into sharp relief when you start asking the question, “Why start with the creation story, and why then the story of Adam?” The answer comes – pretty incontrovertibly, I suggest – when one looks at how Deuteronomy ends. Perhaps it’s obvious, or perhaps not, but this ending shows that the Pentateuch, as we have it in its canonical final form, is not actually primarily about how Israel made the covenant of Moses and got to the promised land. In fact it’s about how Israel were unfaithful to the covenant from the very start, and it ends with Moses solemnly prophesying that they will undoubtedly continue to rebel in the land of Canaan, that they will in days to come be exiled for abrogating the covenant, and that they need to focus on the hope, after that, of a new covenant of grace mediated through one who is to come.

The rest of the Old Testament vindicates Moses by documenting that decline and fall, ending in the Babylonian exile just at the time the prophets begin to announce the New Covenant to be mediated through the coming Messiah. The final book of the Tanakh, 2 Chronicles, ends like Deuteronomy with a prophetic hint of that hope, as the exiled nation receives an edict from God’s “servant” king Cyrus, who has been given (for now) “all the kingdoms of the earth”, saying that he will rebuild the temple (though an inferior one, for now) and allow the exiles home (but still into, as Ezra’s prayer puts it, “slavery”). The prevalence of such a message in the Scriptures explains why there was such a profound Messianic hope amongst the Jews by the time Jesus came. One significant strand of that teaching, from the Pentateuch onwards, is that the purpose of all this goes beyond Israel to the whole world, for the whole earth is God’s.

That being so, we can summarise the Exodus story as “God’s chosen people are called, through a covenant, out of an alien place into a special land prepared by God, in order to serve him and become a ‘kingdom of priests’ for the world. But rebelling by imitating the inhabitants in the land instead of subduing them, they are instead exiled from God’s presence – yet because of God’s love, they will be redeemed through one who will succeed where they failed.”

Now turn back to Genesis, where the story begins, and in Adam we have, also, “a man chosen by God, who is taken from where he was made and placed in a special land, the garden, prepared by God. His relationship too is covenantal, and he is to serve God and be a priest; implicitly from 1.26ff with a view to serving the whole world. But he rebels by imitating the serpent instead of obeying God, and is punished by exile back to where he came, yet with the hint of hope of restoration in 3.15.”

Adam, then, is an archetype not for “mankind” in some generic way, but for Israel in the very specific narrative the author considers so theologically important. Note that even the tree of eternal life in the garden is reflected in the hope of the resurrection at the restoration of the people introduced by Daniel and others. Postell goes into great detail to expand this picture, incorporating the role of Genesis 1 (which, at least typologically, also prefigures Israel as the sacred land of Canaan), and pointing out just how these themes are reiterated and emphasised in the whole Pentateuchal narrative, and indeed many of the historical episodes in the biblical history.

Thus Abram, like Adam, the first major character in God’s plan to reverse his exile, is called by covenant from a foreign land into Canaan, albeit it without full possession. The first story about him involves him going to Egypt, getting into trouble over a woman, and being evicted, using language derived from Genesis 4. And so it goes on – there are linguistic and thematic parallels involving Jacob, Joseph, King Solomon and many others.

No doubt, like most proponents of new theories, Postell overstates his case at some points, but the overall thesis seems to me clear from the overarching message of the Torah alone – Israel, like Adam, has failed and needs to look to the hope of God’s grace “in the last days” (the literal meaning of the phrase used in Deuteronomy) for their restoration from exile. The eighth century prophet Hosea makes the parallel explicit: “But like Adam they transgressed the covenant; there they dealt faithlessly with me” (Hosea 6.7), and he too, even before the exile of the northern kingdom, ends with the eschatological hope of restoration through transformed hearts.

So to read the beginning of Genesis without perceiving its reference to Israel is to misunderstand it, and to see the link is to begin to see the depth of its meaning. But this raises a couple of potential problems.

The first is that other, less conservative, scholars who have made a similar link between Adam and Israel, have concluded that he is therefore an allegorical and fictional character with no reference to actual historic origins. But in my view this is to misunderstand how archetypes function in ancient literature: stories are retold to bring out the parallels, but they only gain their power by being about real events. In this case we can see this in the “secondary” parallels to which Postell draws attention: Abraham, Lot, Jacob, Joseph, Moses, Solomon – all these and more are indicated in the text as embodying echoes of and parallels to this “call-covenant-disobedience-exile-hope” theme, yet that does nothing to diminish their being considered real people who experienced the things described. The message “You’re as bad as your father” loses all its force if he wasn’t like you at all.

The second issue is one that – to my mind – Postell addresses less than is required. He follows John Sailhamer in regarding not only Eden and the garden of Genesis 2, but the whole “heavens and earth” of Genesis 1 as being literally, as well as typologically, about the physical land of Canaan. The problem then becomes how one makes a transition from “Adam as Israel still needing redemption from exile” to “Adam as all mankind needing redemption in Christ” as applied to the gentiles by St Paul. After all, Israel’s exile to Babylon doesn’t involve me, so why should the exile of their ancestor from the garden of Eden?

This is an issue that’s interested me for a number of years – have you ever considered on what basis the specific promises made to Abraham and Israel, the Hebrew Scriptures and the promised New Covenant all suddenly become applicable to the whole world in Christ? I’ll tell you my answer sometime if you’re interested, but the same issue applies to “Adam as Israel’s exiled ancestor”. In what way is he, in that case, my exiled ancestor, from whose curse I need to be rescued as surely as the Jews needed to be delivered from exile by their Messiah?

The provocative answer is that we need to be part of Adam’s story if the problem-solution posed by the torah and the other OT scriptures is to apply to us. Somehow it must be true not only that people are “sinners” in some vague sense, but that they were once taken from their original home to a place blessed by God’s special presence, and were exiled from it through rebellion. That is the problem from which the universalism implicit in Abraham’s call, and Israel’s after him, stems.

The bottom-line answer is that all the discussions we have about Adam as a character in real history, although they are largely irrelevant to Postell’s entirely text-based approach, remain important questions for us as we grapple with biology, anthropology and so on. ANE literary questions still have relevance, the genealogical Adam hypothesis may be of importance, and questions still need to be raised about the age of the earth if Genesis has a historical basis.

Yet we will be better-informed in those discussions when we recognise that the stories in early Genesis have been told in a way that ties them to Israel’s salvation history, and through that to our own redemption from sin. That is what they are for – and not to be examined as “ancient science” or, come to that, “ancient fable.”

Training in medicine (which was my career), social psychology and theology. Interests in most things, but especially the science-faith interface. The rest of my time, though, is spent writing, playing and recording music.
View all posts by Jon Garvey →
This entry was posted in Adam, Creation, Genealogical Adam, History, Science, Theology. Bookmark the permalink.

15 Responses to Adam and Israel