Why randomness and free-will are not comparable

For some reason, Bilbo started a thread on BioLogos directed at me, in which (as far as I can tell) he argues basically, “If God can create free wills that make decisons without reference to him, why could he not create random processes that similarly cause things without reference to him?” Many cans of worms open because of that, which you can read about on that thread. Here I just want to deal in more depth than is possible there on the question of whether the comparison between free-will and randomness is actually a valid one. I suspect it isn’t, except at the most superficial level.

One way in which the two are similar is that neither of them is, in fact, a cause of anything. I explain why chance is not a true cause here, and use one very simple example – the dice throw – as a limiting case to show the principles involved. Let’s see if I can use a similarly simple analogy (rather than an example) of free-will to illustrate the latter. 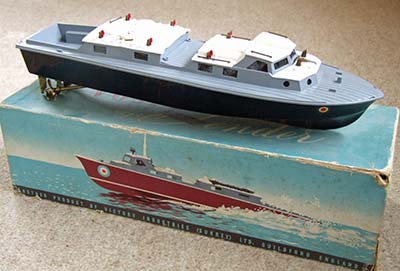 Here’s a picture of a rather nice model boat I got for Christmas back in 1959 or 1960. It was made by a small firm in my home town, and is quite collectible now, which is why I’ve kept it (apart from nostalgia). I fished it out recently to check it over, and sadly the motor burned out when I put batteries in. But when it worked, it had a neat little three-way switch disguised as a life-belt, illustrated here:

For the purpose of this illustration, let’s assume the boat is an autonomous creature, and that the switch represents its free will to do three simple things: to go forwards, go backwards, or stay still. Now, is the switch a cause of anything? Actually the answer is no. Most of the last 57 years it has been in the middle position, and the boat has done nothing. But it can also be involved in the causation of both forward movement, and reverse movement – and the same thing cannot logically be the cause of three contradictory events.

So to speak more precisely, the switch, as a switch, is some kind of potential cause, which the boat (in the place of the operator here) can direct towards the three separate outcomes. Strictly, it is the switch in each of its three positions that makes up three separate causes. And what is governing those positions is not the switch itself , but the boat as a volitional entity.

Analogously, human free-will is not actually a cause of anything, but is a convenient (if often misleading) way of describing the potential variety of outcomes that an individual person – a rational soul – may cause. The unified “I” is to free will as the autonomous boat is to its switch. I am the cause of my choices, not some will apart from me – and “will” is just a way of visualising the facility I use, just as I cause my actions, and my body is the facility I use in so acting.

Now, let’s just attempt the delicate task of relating me and my choices (aka “will”) to God. Once we stop looking at choice through the spectacles of some nebulous power or entity called “free will”, which must somehow be undetermined or make me do things against my… was I going to say “will”? My will can’t act against my will, surely? No, if we simply see me as a rational soul governing the possibilities open to me, and so reducing many potential outcomes to one actuality (very Aristotelian, this, but logically obvious), we’ll see that I am simply acting out my nature.

That nature might be seen as my God-given nature as a rational being, or as the specific nature I have by birth and by the character I have formed since through my circumstances and choices. Much of the latter depends on my relationship with God – all of the sinful part arises from the poverty of my relationship with him. But even in that case, God is the one “in whom we live, and move, and have our being”, who “perceives my thoughts from afar” and who “before a word is on my tongue, knows it completely.”

Apart from that complete and intimate knowledge of me, Scripture affirms, even if it doesn’t fully explain, that our wills – including our rebellious wills – (for which read “what we choose to do”) are not independent of God’s will (ie what he chooses to do from eternity), or antecedent to it, but somehow serve his purposes. They are in a number of cases predicted to do so long before we make our choices or even come to exist. Think, for example, of the prophecies to Israel and Judah foretelling the invasions of Assyria and Babylon respectively as judgements, long before they happened – God’s planned judgements were predicated directly on the future decisions of Shalmaneser and Nebuchadnezzar to make war.

Now, to be honest, I’m not very interested in objections that if this is so, God is unjust to judge, we are not free, and so on. Scripture clearly affirms it, so that’s how it is – spend your energy, if you like, on saying how sovereign divine will and human free will fit together, but don’t waste your breath calling it a problem. That never did Sihon king of Heshbon any good at all, and it won’t do us any good either.

So in the case of “free will”, we find it resolves to an actual causative chain which involves a true agent – a rational human being – but it neither begins nor ends there, not least because all the causes are fully known to God in advance, and inextricably entangled with his own purposes. 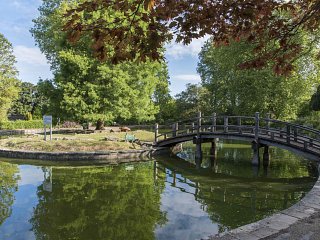 One way of showing how this differs from the idea of “ontological (or any other) chance” is to return to my RAF launch, and its 3-way switch. Does studying the switch give any idea of the probability that it will be in any particular position? Not at all, because its position is always determined by a rational choice. From the boat’s point of view, it wants to go forward far more frequently than it wants to go backwards – when I used it in my childhood, the only times I used reverse were to try to disentangle water weed from the boating lake in Stoke Park from its propellers.

Conversely, if it were the case that God has “created randomness”, there is nothing like the clear chain of real causes that there is in humanly willed events. People seem to think that chance outcomes are occurring in a causal vacuum: somewhere in the intricacies of a roulette wheel spin (an example mentioned by spomeone on the BioLogos thread), “randomness” is lurking – but where? and how is it acting? Actually, the causes are entirely the conscious actions of the dealer, and the physical properties of the system and its components.

All these discussions inevitably seem to revert to quantum events, as the only plausible example of ontological randomness anyone can come up with, when pushed. But these are factually irrelevant to the real world unless and until somebody is finally able to demonstrate that they introduce real biases into macro events such as point mutations or chaotic systems – and that these have more than trivial effects. What would it matter if a few point mutations occur from quantum effects, when their effect depends on macro-scale error correction, transcription, natural selection or asteroid strikes? They are, in fact, nothing more than a theological test case rather than an explanation of reality. That theological interest lies in the apparent truth that no local variables in nature determine individual quantum events.

But as statistician William Briggs has pointed out, that says nothing about quantum events being undetermined by God – or even of their being determined by some kind of internal telelogical nature given to the entities exhibiting quantum effects by God, just as he determines the natures of all other things he creates. In other words, nothing actually indicates that quantum events have no cause, but only that we have not been told the causes and can’t figure them out by science. And if true causes determine them, they are not undetermined, that is they are not random. God is the Creator of all true causes, in monotheism, let alone in Christianity, and all true causes continue to exist in him, to be sustained by him, to be known by him – and to be willed by him.

Another way of considering this is that mind and will are prior to all events, directly or indirectly. There would be no events at all had God not willed to create. Life admittedly gets more interesting when God delegates degrees of volition to creatures like ourselves and angels (or even were he to give volition in lesser degrees to lower organisms, or even to non-living entities in some kind of pan-psychic way). But even in those cases, the powers creatures have to choose are subordinate to, or within, the overarching will of God, by their very nature. They were never “free” in the sense that they were autonomous of God – that is the “post renaissance” heresy that has dogged our view of humanness and our religious life for too many centuries.

Nevertheless, not only does Scripture affirm that our choices are subordinate to God’s but one can construct coherent and rational explanations of how human choices might fit into God’s final causation and yet remain accountable and – as we perceive them directly – our own.

No similar thing can be done with ontological chance, which as soon as it is known, predicted, understood, ordained or used by God towards some purpose simply ceases to have any of the the characteristics of chance, and instead takes on all the features of choice.

That’s scarcely surprising since creation means nothing more than God bringing order from nothingness by choice. It’s hard to see that “choosing not to choose” could be anything to do with that: “And God said, “Let there be options!”

2 Responses to Why randomness and free-will are not comparable