I nearly meet a fossil

You know that thing where you can claim to have all-but met someone because you met someone who has? In that way, I’ve met the Queen because my brother shook hands with her royal glove. Well, yesterday the wife and I met, in this indirect way, the celebrated David Attenborough – whose programmes I first watched back in in 1959 – via the intermediary of a new fossil Jurassic ichthyosaur, on which he has just had a documentary broadcast.

If this link works for you, you’ll see he didn’t by any means discover it himself, but had privileged access from the time it was first discovered in the rocks just west of Lyme Regis on our local Jurassic coast.

Yesterday was only the second day it has been on public display at the small museum in Charmouth, so after a fifteen minute drive we were among the first people in the world to see it in the flesh, as it were, on a blustery day which, unlike the fossil itself, I did photograph. Despite the Jurassic coast’s world heritage status as one of the first-discovered, as well as one of the most important, fossil beds in the world, it still lacks a world-class museum, so the “sea-dragon” is displayed in a two room site above a fossil shop – but what a glorious view from the window!

Well, below is the beast itself, from a professional photograph. It’s thought to be a new species, particularly from the large size of the front flippers, which suggest it spent its life cruising the open ocean like some modern sharks. 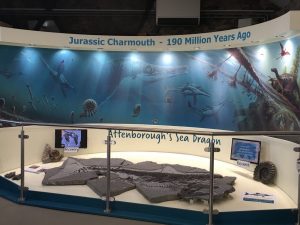 Like David Attenborough, my first real interest in natural history was through fossils. In my case they were dug up by a Mr Cheverton, at my father’s office, in his garden. To me the wonderful thing is that in a fossil one is confronted by what was once one of God’s living creatures, a solid fact amongst all the controversies about theories of evolution, interpretations of Genesis and whatever else. I have an ichthyosaur vertebra of my own, and am always in wonder at how much it reveals about the creature when I apply the principles of human anatomy I learned at medical school to it. So old, and yet so informative.

What’s also wonderful is how much has advanced, since my youth, in the sheer amount of information that can now be gleaned from such a fossil about its life, death and world. And that’s why, despite all the skepticism you might pick up here at the Hump about the details of evolutionary theory as she is spoke, I cannot never subscribe to a young earth framework – and indeed, have never been seriously persuaded by it since I was a child of five (before which I’d had no opinion either way). 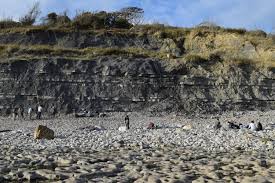 This photo of the discovery site shows it was embedded maybe halfway up the cliffs, and eroded out by the storms that have been regularly washing the cliffs back since the English channel formed, by the breakdown of a chalk land-bridge, several ice-ages ago. At the last rise in sea-level, 9,000 years ago, a decent population of folks was already spread across Britain (including Starr Carr in Yorkshire), but subsequently needed boats to get to France to trade. Jericho was being built at that time far across the continent in the Jordan Valley, and Göbekli Tepe in Turkey. Just down the road from my house mesolithic people were living in the river valley cut through our Cretaceous greensand, a mere 50 million years old compared to the Jurassic’s 200 million years. They ate modern hazelnuts, apples, blackberries, roe-deer and wild boar, and maybe kept dogs. If they visited the coast, our fossil was just as it is now, only entombed many feet underfoot and many yards back from the cliff.

You can’t see it from the photograph, but the plane of shale in which the fossil is embedded is also scattered with the shells of the ammonites so typical of every layer of the cliffs. What we see is a sea-bed captured at a single point in time, and in this case a point at which our reptile fell had fallen victim to the everyday occurrence of predation. 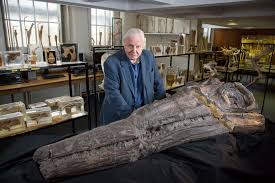 Close up you can, in fact, easily see the healed effects of previous violence on one flipper. But this creature died from one massive bite from a far larger beast, the only known candidate for which would be the largest ichthysaur known (and also found on the Jurassic coast), which was more than thirty feet long. It looks as though such a creature took a bite across the body from above, severing the head, leaving the front flippers hanging (so that in the fossil they are reversed), and crushing a whole swathe of (unhealed) ribs halfway along their length. There is a visible tooth-mark on one of the vertebrae.

Nevertheless, the existence of the fossil shows that the predator lost its meal – unless it stuck around and gulped down the severed head as a favoured reptilian delicacy. Apparently the stricken animal thrashed out of reach and sank to its 200-million year resting place. No doubt it didn’t go to waste, any more than a shark carcase would now: nature wastes nothing.

Unusually this fossil preserves some of the ichthyosaur’s skin, analysis of which has shown, for the first time, dark pigment on the dorsal aspect which is lacking below: this species, at least, was countershaded like comparable marine creatures nowadays. 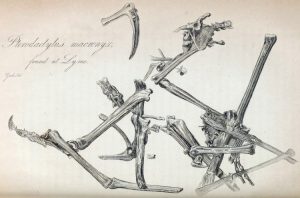 There was nothing primitive about this creature, or its world. Nothing like it exists today, nor like the ammonites and belemnites that share its resting place, nor of the dinosaurs sometimes found, probably washed out to sea by rivers, nor of the pterosaur Dimorphodon first found by Mary Anning in 1828 and never yet seen anywhere else in the world but Lyme Regis.

All have their ecological equivalents, of course, despite the fact that Jurassic Dorset was a tropical shallow sea, and Charmouth beach is chilly bathing even in summer. Still, we get dolphins in the bay, which are mammals rather than reptiles – maybe some are even predated by the orcas occasionally seen offshore. Winter flash floods have been known to wash cattle out to sea. And seagulls about the size of Dimorphodon will steal your fish and chips if you’re careless on the beach. We have no ammonites, but plenty of their cousin cuttlefish with no shells, but bones which wash up in due season.

Plus ça change, plus c’est la même chose – except that now we live in a world where man has been appointed to rule and subdue, a task we will only achieve responsibly when the whole creation is transformed through the work of Christ. Why the Lord chose to take our world through whole suites of biological changes prior to that happening is something he has not chosen to reveal to us. But he has left us some remarkable vestiges by which to admire his handiwork even more. 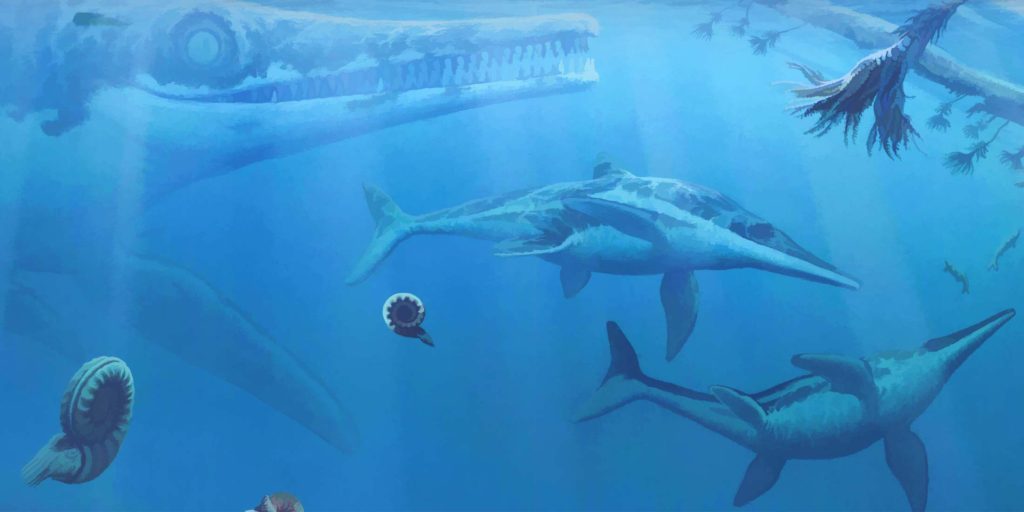 4 Responses to I nearly meet a fossil