Implications of the origin of non-species

I’ve been reflecting a little more on some issues I raised in a reply to Merv on Eddie’s thread. It builds on the ongoing consideration of the Aristotelian idea of formal causation, but the involves more global implications of the philosophical divide between realism and nominalism – broadly, whether there are genuine universal “types” or just multitudes of individual things that we humans lump together for convenience.

The implications I’m considering are primarily for all the commonest kinds of theistic evolutionist: those who accept mainstream Darwinian theory as God’s means of creating life, whether or not in a directed way, and whether or not he planned mankind or merely greeted with delight some more contingent “rational” creature on which he chose to place his image (whatever that might mean). So you can see I’m thinking quite generally here – the common factor in a wide range of positions is the tendency to combine science and religion and leave philosophy out of the frame as unimportant. The Christian biology sympathiser – a familar figure to you?

Let’s begin by saying that Darwin’s Origin of the Species was a misnomer, as the book starts by arguing the arbitrariness of the term “species”, showing how there is no real agreement on its meaning as compared to sub-species, varieties, etc. This, of course, is in preparation for his account of gradualist transformation by the accumulation of tiny variations, still the core claim of Darwinism. Philosophically he argues for, or presupposes, nominalism, for the creatures we see in life or as fossils are merely random points in a continuum, not representatives of a real type, with its own actual nature.

In modern biology, cladism represents this idea better than traditional taxonomy. The latter describes the celebrated “nested hierarchy”, in which a raven is a particular kind of corvid, which is a kind of bird, vertebrate and so on, and a finch is a bird but not a corvid or a raven. However clades, strictly speaking, are not heirarchies but continua. Depending on the level under consideration (ultimately including the whole tree, bush or net of life) the raven and the finch may belong on the same continuum. There is an assumed series of infinitesimally graded forms one could trace between them, corresponding to their genealogy. This gradualist, nominalist, theme is accentuated by new discoveries like horizontal gene transfer, which is a kind of natural trans-speciesism – though it inconveniently messes up cladistics as a reliable means of tracing ancestry.

Stephen Jay Gould’s punctuated equilibria may seem to represent a counter to this nominalism, but that is not so. Gould was unusually well-informed philosophically (compared to certain self-appointed spokesmen for evolution now), and clearly considered his punc eek as an accelerated gradualism: see his references to the human tendency to reduce continua to categories in this piece (well worth reading anyway as a sound rebuttal of the familiar scientistic myth of science v religion).

The consequence of all this is that there is no such thing as the genus “raven”, but only of interbreeding individual organisms sufficiently similar, at this point in space-time, to warrant a label of convenience. If we were God, able to see every individual of the raven clade across the world and in time, together with all its genetic variation, what use would the label be? How could there be a raven “nature” (or “essence”) – a raven “universal”?

Now, to parrot Darwin, there is a grandeur in the view that God’s creative activity encompasses infinite variation rather than any finite number of specific categories. But there would be significant consequences, if this were true. As I hinted to Merv in my comment, the biological category “man” would be meaningless. One sees Christian anthropologists discussing whether the word “human” should apply to H. sapiens, to genus Homo or whatever, but it’s not just a question of which “box” to put ones biological specimens in, nor even to consider who is susceptible to sin and eligible for salvation. The problem is that the word “human” means nothing biologically – there is no dividing line.

One might want to say that biology is not everything, but that God chose mankind on a basis not strictly biological for his blessing. But do you see the problem? for God to choose mankind, there has to be a mankind to choose. According to Darwinism, the gene composition of the race has been changing continuously over time – we are not Cro-Magnon man. So what is it that gives us any solidarity with him, compared to Neanderthal, Denisovian or other varieties with which we (or rather,”they”) maybe didn’t interbreed?

Come to that, what gives me human solidarity with you, or with other races? Biology may have combated racism (having previously fostered it catastrophically in Haeckel etc) by showing that we are biologically one species. But in the absence of the real existence of the universal called “species”, what does that even mean? I am me. You are you. And we are competing to reproduce our genes.

Furthermore, if there are no universal natures, how can “human nature” exist? Original sin – any sin – or even universal morality or universal psychology – are meaningless. I can’t judge a chimp for cannibalism – how can I judge Hannibal Lector, whose genotype is different from mine? How can Jesus represent, or stand surety for, humanity as a whole? How can God judge the quick and the dead?

This is more than theological – if there is no universal human “essence”, I must assess humanness by some particular arbitrary quality. The old nominalists used to set posers like how many grains of sand you had to remove from a heap before it ceased to be a heap. Brought up to date, one could ask how many genes you have to replace for an elephant to be a mammoth, or a man a monster? It’s not theoretical – why are Downs syndrome children routinely aborted? Because in some way, they’re considered not sufficiently human, whether because their chromosome number doesn’t match, or because they are deemed to be sub-human with respect to intellect or physical health (though paradoxically they can join the actor’s union and appear on TV).

Or perhaps the general argument is that humanness really means something like “rational consciousness”, so that embryos are not human (sometimes – unless they’re wanted, in which case you can be convicted of their homicide). That’s a parallel to the TE idea that God was on the lookout for evolution to produce a quality – intelligence – rather than a nature, humanity.

The big question, then, is “How can Christian truth be true if there are no true natural kinds?” That isn’t actually meant as a rhetorical question, but an intellectual challenge. If one wants to hold Darwinian gradualism and Christianity at the same time, one needs to make them fit coherently. Over to you on that.

This inevitably has a bearing on how you do science. The discoverer of Downs Trisomy 21, Jerome Lejeune, had a very clear view of human nature:

After fertilization has taken place a new human being has come into being. [It] is no longer a matter of taste or opinion…it is plain experimental evidence. Each individual has a very neat beginning, at conception.
– Jerome Lejeune

Lejeune denied, therefore, that personhood was a metaphysical conception, but a scientific one. I think he was wrong, but only because like many scientists – none more so than Darwin – he was blind to his own metaphysical commitments. It’s fair to say that all Darwin’s actual observations were compatible with realism: it was his speculation about the capabilities of natural selection that took him, probably unwittingly, into nominalism and raised the big metaphysical issues.

His major model – livestock breeding – actually shows severe constraints on variation, as was pointed out to him by scientific opponents. That has not changed – after 150 years no new species has been produced experimentally by random mutation and selection.

He admitted that the fossil record overwhelmingly showed stasis and sudden change, not gradation, and that remains the case too. A few gradual transitions are seen in the lowest taxa: otherwise the picture is of top-down diversification, always abrupt. Punctuated equilibria, as a gradualist theory, speculates on the insensitivity of the fossil record – the data fits saltation just as well.

My point is that there is a necessary metaphysical choice, since in all science, except for the doctrinaire meta-theories where everything turns out to have been predicted by the theory, the data will be ambiguous. But metaphysical commitments will, in many cases, guide what you look for, and Christian faith is at least as entitled to its metaphysical agenda as Darwin’s agnosticism was. If the fossil record and so on render nominalism less likely and real natural forms more likely, will we like Darwin put the palaeontological evidence on hold, or will we instead doubt the theory? If holding to the theory leads to rewriting your theology in a major way (which, as I’ve exhaustively shown, leads to incoherence), is that a necessary price to pay, or the over-egging of a metaphysical preference?

As for me, I believe there are species, and they actually originated in the Logos of God. 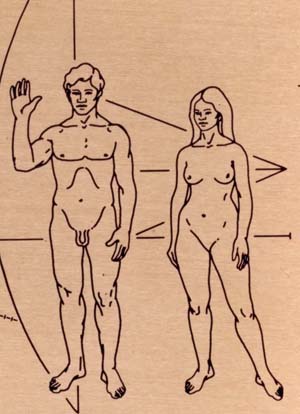 The aliens are nominalist Darwinians: “Why did they only draw these two?”

82 Responses to Implications of the origin of non-species