One of the commonplaces of the “liberal evangelical” BioLogian approach to Bible interpretation is to use the example of ANE cosmology as a way of showing that the Bible cannot be taken as a scientific text. The concept of the Universe said to underlie Genesis, and common to the rest of the ancient world, is that shown in this diagram: 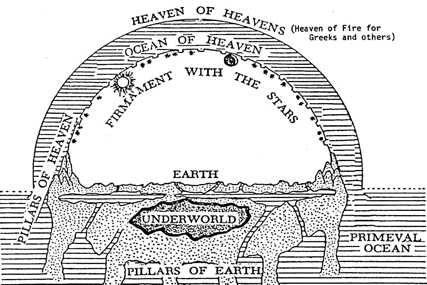 It should be noted from the first that this is not an ancient diagram, but a modern interpretation of ancient descriptions. It is very easy to misinterpret the past, one example being the assumption that the mediaeval mappae mundi also suggest a flat earth surrounded by water, whereas in fact they reflect a belief that the whole inhabited world was on one landmass in the northen hemisphere of a globe, and therefore represented roughly as a flat, broadly circular, map.

There has been much discussion over whether the word “raqia” (firmament) necessarily represents a solid sheet, as the liberals say, or whether it has a more flexible meaning. More important, though, are the arguments of G K Beale and others that the “three layer cosmos” of the diagram isn’t a physical representation at all, but a spiritual one.

Denis Lamoreux is in no doubt. In a BioLogos article he says:

In fact, Holy Scripture features an ancient science of the structure, operation, and origin of the universe and life. The diagram presents the world as conceived by ancient Near Eastern peoples, including God’s chosen people, the Hebrews. It may come as a surprise to most Bible-reading Christians, but a 3-tier universe is found in the Word of God. A few of these ancient conceptions of the natural world include:

Notice that the ancient Hebrew “science” of the cosmos is said to be carried over into the New Testament. Peter Enns, as part of his attempt to show that Paul’s theology was adversely affected by his ancient worldview, makes this explicit:

In one of the most important passages in the New Testament, the wonderful Kenotic Hymn, he states that at the name of Jesus every knee should bow and every tongue confess that Jesus Christ is Lord (1) in heaven, (2) on earth, and (3) in the underworld (Philippians 2:1011). Paul clearly accepted the 3-tier universe. But, does his belief confer reality to this understanding of the structure of the universe? And since he believed the world had three tiers, do we also have to believe it? More specifically, Paul accepted that there was a subterranean region where beings exist. Does his belief bestow reality to such a place with such individuals under the surface of the earth? And if we decide to reject the 3-tier universe in Philippians 2, but to accept Jesus as Lord, are we to be accused of being inconsistent? Or worse, of picking-and-choosing the Bible verses that we want to believe? I doubt anyone would answer yes to any of these five questions.

But I think we should step back before assuming a general principle that “the” biblical cosmology has been shown to be false. We need to ask, first, if the cosmology of ancient Mesopotamia that might have influenced the Old Testament was still unchanged in New Testament times. And the answer is, “Absolutely not.” In the first place, Paul’s own thinking was affected by Intertestamental Jewish ideas, because he makes reference to “the third heaven“, a rather opaque concept to us but certainly somewhat more complex than the generic “ANE diagram” above.

But the more significant fact is that, by Paul’s time, the entire educated Greek world knew that the world was round. Eratosthenes had even approximately calculated its diameter by 200BC. That’s a surprise to many who don’t realise that the mediaeval Europeans carried this over – nobody since Aristotle with a decent education believed that the world was flat. As James Hannam says in God’s Philosophers:

…medieval people,like the ancient Greeks, thought that the Universe was perfectly round, with the earth at its centre.

I would add a corrective to the effect that in this scheme, for the mediaeval mind at least, the “centre” represented the lowest level, not the most important. Paul, of course, had a broad education with, we know, access to classical Greek literature. It would have been extraordinary for him to have laboured under a cosmology a millennium or more older. Whether traditional Hebrew religion would have retained an attachment to such a view I don’t know – and I doubt the evidence exists to be certain. But Paul certainly would not have been unaware either of the newer view – or of the fact that most of his Gentile addressees would have thought in such terms.

I conclude two things from this discussion.

The first is that to portray a monolithic “Bible cosmology” in irremediable conflict with the physical truth of science is simply wrong. Paul is able to translate the Old Testament’s cosmology without undue effort into the newer and very different terms of the classical Greek Aristotelian astronomy known to his more educated readers – probably the science he accepted himself.

Secondly, this does not prevent either his three-tier cosmos references (which undoubtably match those of the Old Testament) nor his more esoteric interaction with Jewish ideas of the “third heaven”. To me, the most plausible explanation for this is that Beale is right in saying that the Bible, either Old or New Tesament, never intended to illustrate the cosmos in material terms, but in a spiritual hierarchy from God’s dwelling, heaven, through the earth representing his cosmic temple, to the “place beneath” in which the deceased dwell. You may note that these are the same kind of terms in which Christians nowadays, fully conversant with the physical configuration of the Universe, conceive of things spiritual. It seems not at all outlandish that these were the priorities, too, of the ancient Hebrew author of Genesis. And maybe even of the Babylonians, too.