It’s all part of the plan

On an Uncommon Descent thread, I was taken to task for not expanding on an answer I gave about whether there are things that are not designed. On the basis that God is the Creator of all things I had said the answer was “No.” The immediate challenge to me was whether I included my own sins in that, and I think that was intended to demolish my position. In fact, as I shall go on to show, it simply raises a whole new topic in theology which has been tackled by varying approaches from earliest times.

But as a question about non-design it is a non-challenge: my sins, at the very least, are designed by me. The big theological question is whether, in any way, they are also caused by God – that is, the issue is not whether some things are not designed, but whether some things have two designers.

Incidentally I didn’t answer on the thread because it was off-topic (and I was involved in a wedding): off topic because my only previous post on the thread, which was about “poor design”, not “non-design”, was the obvious truth that one cannot criticise a design without recognising it is designed. Just as you can’t criticise sinful acts unless they are acts.

My first approach is via the doctrine of “continous creation”, which is attributed to Orthodox writers like Maximus the Confessor and Gregory Palamas, though usually now as part of the move to baptize modernist ideas with the cachet of “Orthodoxy”. At least, the web has far more references to citations from TEs about it than quotations from the ancient authors themselves, linking it to Process Theology or mis-applying it to stages in evolution. But the Patristic authors seem to be using the term simply as an alternative description of divine preservation, or perhaps providence, at least according to Archbishop Panteleimon of Pelusion, who has a useful article about it. He himself distinguishes preservation from creation, but says:

Divine Preservation could be considered as a continuous Creation (Conservatio continua creation) whereby all that has been brought into existence from nonexistence, continues to exist and is preserved by the Divine Power that created them from nothingness. Thus, the Creative Action of God brought everything from nothingness into being whereas the Preservative Action of God presupposes their existence. And although in the Creation God Acted alone, in Divine Preservation the creative Action of God co-operates with the laws of nature that He had established so that the Universe will continue without reverting to non-existence.

He does not appear to mean by this simply God’s passive sustaining of natural laws or free acts, as if he were a mere carrier wave in which independent agents imprint their image:

Thus, when we use the term Divine Preservation we do not simply mean Gods consenting to the continuous existence of the Universe, but that through His Intervention, He causes the preservation of the Cosmos, guarding through His Almighty Will not only the whole Universe, but every atom of every element from which the Universe is composed. It is understandable, however, that this Divine Intervention does not exclude the synergy of the natural powers that do not exist independently, but through Gods creative Will.

He cites Basil the Great to confirm the individuality of this care:

St Basil the Great expressed the Truth that the Preservative Action of God is not only general, protecting the entire Cosmos but also extends to each and every one of the creatures individually. In all the nature of the Universe, the visible and invisible, the Creator Word offers assistance according to the needs of each species, in various ways because of the multi-species.

…The Universe is not a mechanical work of art but a living Organism receiving Life from the Source of Life. A branch that is cut off from a tree, withers and dies. In the same way, the world cannot exist without Divine Providence.

Now all this suggests the entire Creation originating in the mind and action of God, and as it were being recreated moment by moment with the same individual attention. In his detailed analysis, Panteleimon distinguishes, but affirms, God’s government of all things:

This brings us to my second approach, that of Aquinas, which is quite similar, though he explores a more sophisticated philosophical approach than the idea of “synergy”. His position is that every single event has God as its first cause not in time, but in will. That’s how he can admit the possibility of an eternal creation nevertheless created by God. It also enables him to envisage the products of natural “law”, of chance, and even of human will as being actively designed by God, yet fully respecting their secondary causes.

He would answer the challenge about my sinful acts by saying that God created them, though not as sin, but as part of his unfathomable purpose for ultimate good, in no way denying either the freedom or the culpability of my own acts. That’s deep theology, but of course he backs it by Scriptural examples like Pharaoh’s stubbornness serving God’s purpose in the exodus, or God intending the Patriarchs’ mistreatment of Joseph to save many lives. One may disagree with it, as with the Orthodox approach, but one can’t pretend that the problem of evil is an embarrasment to classical theology, which finally places all events under God’s designing will, though by one means or another refusing to allow that God is the author of evil.

Aquinas also makes space for “imperfections” in creation whereby things fall below their divinely created nature. But one should note his mediaeval concept that variation is a departure from perfect “form” rather than the expression of God’s creative variety (and the fruitful source of evolutionary change). In any case, such “imperfections”, like all things, remain in Thomas’s view under the control of God’s designing providence.

My third approach is biblical, in the Hebrew understanding of creation as we now understand it from ANE studies. As John Walton has shown, the core concept of “creation” in the Old Testament, as in the rest of the ANE, is “assigning function”, rather than “causing material existence.” In other words, what does not have function is not created. And since God is the only Creator, nothing has been created except that which has been assigned a function in his purposes. Or to put it another way, only what is designed exists. Even on a modern materialist understanding of creation, it is hard to understand how something undesigned could come into being from the will and mind of God, and be preserved in existence moment by moment by that same divine will and mind. On the Hebrew biblical understanding, “undesigned creation” is an oxymoron.

This brings me to my fourth and last approach, which is Christological. The New Testament teaches us that without the Logos nothing that was made came into being. That concept of Christ as “Logos” embodies the power, love, wisdom and purpose of the personal God in each and every act of creation. Colossians reminds us that “all things” includes things in heaven and on earth, visible and invisible, thrones, powers, rulers or authorities, and that they were created for Christ as well as by him. Furthermore, their “holding together” is also by the action of Christ in whom God caused all his fullness to dwell, rather than the expression of some impersonal divine energy; and that divine action is all directed toward the final purpose of God in uniting everything together in Christ. As the Orthodox Archbishop I first quoted puts it:

Furthermore, Divine Preservation secures the natural order and preservation of creatures whereas Divine Governing secures the progress of the Cosmos to its final and perfect end as predetermined by God.

Those are just a few reasons, off the top of my head, for saying that nothing exists that has not been designed by God, though there are things that have also been designed by those secondary agents given the requisite power to do so by God. “What do you have that you did not receive? And if you did receive it, why do you boast as if you did not?” That’s why a designer of beautiful things like J S Bach signed his works “Soli Deo Gloria”: 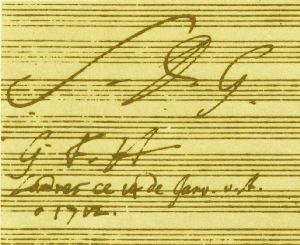 11 Responses to It’s all part of the plan