Worldviews are, almost by definition, taken for granted – we only see those of others. But for all that they’re human choices, even when unconscious, and result from metaphysical commitments, not from evidence. Which is interesting given that they determine how we see ourselves in the universe.

I was idly watching a TV programme on Egyptian art yesterday. An Egyptologist was interviewed, and commented on the way the Old Kingdom Egyptians were much more careful and realistic in their portrayal of the natural world than in human figures. This, she explained, reflected how they viewed the cosmos. 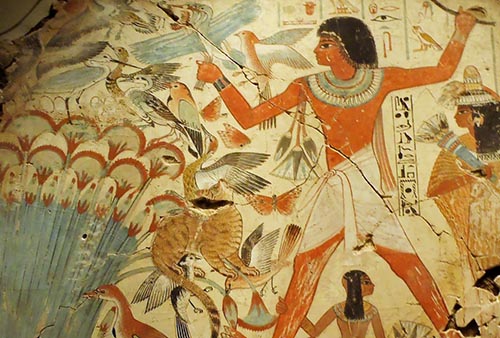 Humans, she said, were just the beasts of burden for the gods. They were, in many ways, lowest in the scheme of things. Animals, by contrast, were in direct communication with deity – they spoke the secret languages of deity which humans could not understand, and so were sacred both in themselves, and in the wisdom they could impart through omens, and so on.

That description shows what a revolutionary worldview the ancient Hebrew one was, especially given the story of Israel’s origins in Egypt. For their creation story, the first few chapters of Genesis, placed man at the pinnacle of creation under God, made not to be God’s mere slave, but his vice-regent on earth.

“Be fruitful and increase in number; fill the earth and subdue it. Rule over the fish of the sea and the birds of the air and over every living creature that moves on the ground.”

Now I must quickly add that the whole biblical picture is one of stewardship on God’s behalf, of rule for the sake of the ruled, and not as the self-centred exploitation of absolute ownership which came to be understood in some quarters in early modern times (giving rise to the Baconian aspect of scientific endeavour as well as the excesses of industrialism). Indeed, it’s as much as anything a priestly role (made doubly clear in the Adam account of ch2, but inherent in the structure of Genesis 1 as a temple inauguration text too).

It seems, according to Ted Davis’ recent BioLogos article, that Robert Boyle was one of the first modern scientists to see this priestly role partly in terms of understanding creation and offering worship to its Creator that the creation is incapable of articulating for itself. Note what a direct reveral of the Egyptian view that is – where it was the animals thast were the mediators between mankind and the gods.

Nowadays, some evolutionists have taken on board a worldview that marginalises mankind. I’m not sure where it arose, and perhaps it doesn’t matter. But either they provocatively cite bacteria as the pinnacle of evolution on numerical and longevity grounds, or view humans as parasites threatening the whole world order. But a majority even of these, when push comes to shove, regard human beings as responsible for the custodianship of our planet. Where nature cannot help itself, we have the nous and the duty to step in and preserve it both for our own benefit, and for its own sake.

What is interesting is how that attitude, even in secular circles, is a direct descendant of the revolutionary Hebrew worldview, rather than the more politically powerful Egyptian one. Indeed, it’s closer to the Bible even than to the Renaissance humanistic mantra that man is the centre of all things (isn’t it interesting how Renaissance artists, in contrast to Egyptians, did humans far better than animals?).

I suggest that, especially for Christians, understanding that biblical creation wordview, in all its implications, is a corrective to many of the problems we see in the environment today. That takes some work because creation doctrine has suffered perversions both within the Church and outside it down the centuries. But it still makes more sense for our world than that of the Old Kingdom, or that of the New Atheism.

43 Responses to Lessons from ancient Egypt