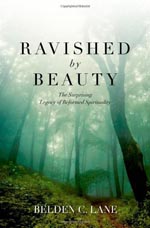 This is a short review of Ravished by Beauty, by Belden C Lane (Oxford 2011), which was recommended to me by Peter Harris. In it the author tries to recover the rich theology of nature in the Reformed tradition, which although largely forgotten (to the point of being, I suspect, incredible to some knee-jerk opponents of Reformed Christianity) actually dates back to Calvin himself.

First, let me get my personal beefs out of the way. I have to say I found parts of the book rather irritating. Lane writes as someone who moved away from his Calvinist upbringing, almost became a Catholic through a long stint working in a Catholic College, and sees this project as a project to recover of the best part of his Reformed roots. And that’s good – everyone should change denomination at least once in their life, since we are not born again into a tradition but into Christ.

Nevertheless, along the way the author seems to have picked up an eclectic mix of (sometimes incompatible) theologies and a good dose of the modern theological zeitgeist of Moltmann et al, and he sometimes seems to be imposing them on his sources. It’s disconcerting, for example, as he reviews a seventeenth century writer, so find God described as “she”; and it takes a moment to realise that it isn’t a paraphrase from the author but recent feminist theology read back 300 years (in all probability against the wishes of the source!).

Analogously he condemns St Boniface’s destruction of the pagan sacred oak of Donar in the eight century as the kind of anti-nature aberration that has sometimes blemished the face of Christianity down the ages. Now Boniface came from just a few miles west of here (Winfrith was his Saxon name), within a culture that had been evangelized by missionaries from the Welsh Celtic Church whose modern reinvention Lane admires, a church marked by its close association with nature. Furthermore, much of Devon, and many of the excroaching Saxons, though recently christianized, were still pagans. I feel it would have been more charitable, and more scholarly, to assume that Boniface had a better handle on his own culture than a contemporary American academic.

The problem is that one begins to wonder how legitimately he is using his primary sources, and so to doubt his main thesis. But that would be unwarranted, for his case overall is valid, well referenced and verifiable. In essence, it is that Reformed doctrine, especially as found in John Calvin and his successors, had from its very start a “theology of desire”, in which the wonder of natural beauty, often at an almost mystical level, was positively encouraged as a means of being caught up in – even ravished by – the glory of God. This is unexpected for those who see Calvinism as the epitome of cold intellectuallity. But as Lane points out, not only have they misread some of the signals the Reformers sent out, but have been influenced by the overly scholastic and theoretical turn that much of later Calvinism took both in Europe and America.

For Calvin, then, even in his Institutes but even more in some of his less-often read  commentaries, nature was not only a source of lessons about God, but actually a window through which he could be apprehended emotionally and spiritually – subject always to the clearer revelation of Scripture. As the mystical poet George Herbert wrote:

A man that looks on glassOn it may stay his eye
Or if he pleaseth, through it pass
And then the heaven espy.

This trend reached its zenith (again counterintuitively for the victims of modern prejudices) in the early Puritans of Britain and New England. The fire of love for God was at the heart of their writing, and even more their preaching, and admiration of nature was a major aspect of that. Perhaps the highest example (not mentioned by Lane) is the writing of Thomas Traherne, but it is found through the great names of Puritanism like Richard Sibbes or Richard Baxter. Lane draws attention to an even more surprising stream, which was the strong emphasis on the raptures of married love, emphasising the Pauline typology of marriage as reflecting the love of Christ with an astonishing degree of eroticism, given the Puritans’ straightlaced reputation. Indeed, Lane suggests that the strong Puritan emphasis on moral restraint was actually a necessary counter to the very sensual approach to faith they developed from Calvin.

The truth is that these emphases on the goodness of the created order infused Puritanism in many other ways too: they rediscovered the vocation of all believers, glorifying the labour of the artisan as being just as divine as that of the preacher when it was dedicated to God. The principle of sola dei gloria meant that God’s goodness could, and should, be enjoyed through the minutiae of family and work, and equally of the natural world. One should not forget, either, the boost to natural philosophy this gave, through those like Robert Boyle, encouraged by the Puritan Commonwealth.

This all had some very positive practical results. There is no doubt that the status of women within Puritanism was high for the times (partly because men were encouraged to think of themselves – quite literally – as the bride of Christ). Puritans were responsible for early animal welfare legislation on the basis that creation was God’s to be nurtured, not ours to be exploited. And there was even a degree of environmental concern not seen again until after the industrial revolution.

Lane evenhandedly adds that these basic Puritan concerns could lead in bad directions too. He points out that the later New England Puritans (the English Puritans having been more or less eradicated) began to be more concerned with the ideas of prosperity (aka wealth) as the mark of God’s approval, and with dominance over nature (to the detriment of New England’s natural landscape), not to mention the patriarchal domination of family. This was the “Protestant work ethic” that has brought such mixed blessings on the world. But it came about through the loss of Calvin’s strong doctrine of creation.

Lane also critiques Calvinism for its later almost exclusive concentration on the “doctrines of grace” such as the mysteries of divine election and reprobation. To be honest, it’s clear that Lane doesn’t like these doctrines anyway, so one must be cautious in his evaluation of their “hijacking” of Reformed theology. He seems not to realise that, in context, they are of one piece with the rest of Calvin’s teaching, and that is because he found the whole of it within Scripture. Calvin appears less concerned with traditions, and more with the Bible, than Lane is.

An exception to the observed decline in New England Puritanism is Jonathan Edwards, to whom Lane devotes a whole chapter – and it is the best in the book, in my opinion. Edwards appears, from childhood, to have appreciated the divine origin of nature, and its capacity to teach us about God. It’s clear that much of his depest theological and philosophical thought was deeply engaged with his love for God’s creation. Edwards is a man to study if we’re serious about recovering the full Christian teaching on creation, it seems.

Finally, for all its faults (as I perceive them – but of course I have my own biases), Ravished by Beauty does not end up as a mere historical study, or an exercise in aesthetic theology. Like all good Reformed thinking, it challenges us to practical and ethical action. The call to the kind of environmental concern which Pete Harris’s series (and his organisation A Rocha) makes, and which Sy Garte’s writing also references, is made strongly in the book. And so is the natural world’s close linkage to the problems of human poverty and injustice, and to the gospel message of renewal, both for sinful people and for the whole cosmos.

For as he, and the Calvinists his book studies, recognise, our whole understanding of creation ought to be related to our doctrine of Christ – and especially the crucified Lord whose resurrection holds the promise of an even more ravishingly beautiful creation, renewed and restored for the coming age of God.

Training in medicine (which was my career), social psychology and theology. Interests in most things, but especially the science-faith interface. The rest of my time, though, is spent writing, playing and recording music.
View all posts by Jon Garvey →
This entry was posted in Creation, History, Theology. Bookmark the permalink.