Time to move away from free-will, I think. I’d like to take a look at the appropriateness, or otherwise, of the term Evolutionary Creation. Not that I would expect, or want, to achieve any change of usage. Short descriptive terms are always of ambiguous value, as Eddie Robinson pointed out in his comments on “classical theism” here a week or two ago, but we couldn’t really do without them. My historian cousin was saying just that last week when we were discussing the shortcomings of the term “Renaissance”. Still, it’s good to question exactly what such labels imply, because that sometimes reveals deeper assumptions or blind-spots in the coining of the terms.

The limitations of these descriptors, and the qualities of good ones, can be glimpsed by looking at the alternative positions to “evolutionary creation”. Creationism, for example, was conceived in contrast to those descriptions of biological evolution – sadly the majority even in school textbooks – as “undirected and without purpose”. The term implies that there is a God who was responsible, as opposed to no God being responsible. Granted its common usage also usually implies a degree of biblical literalism, but this is easily added where necessary by expansions like “Biblical Young Earth Creationism.” The term does the job, and is flexible enough to be a universal position – Creationists believe God made the whole cosmos the same way he made life.

Theistic Evolution is a more limited term. If you think about it, the implication is that one believes in (biological) evolution, but want to distinguish evolution with God behind it from the godless version. That could, conceptually, allow it actually to be a scientific theory if one believed God’s hand to be traceable in nature, but at least it is a philosophy/metaphysics of science category to exactly the same extent as “evolution”, as used by the “undirected and without purpose” crowd, is. So it’s a genuine alternative to naturalistic evolution, though properly restricted to biological change.

Any problems with “theistic evolution” as a label come from the looseness of the terms “theistic” and “evolution”, and especially the latter. If one accepts those textbook definitions of evolution as being unplanned and without goals, then inevitably ones theos is an irrelevance. The term would then just imply belief in two disparate (and possibly incompatible) things.

At best one might be talking about deistic evolution (accepting the common theological distinction between “Deus” as a distant First Cause and “Theos” as the involved God of Christianity). It appears that many contemporary theistic evolutionists have engaged in a bold attempt to square this circle by rewriting basic theology so that God can both be a hands on and loving God, and leave evolution undirected and unplanned. This is achieved by making creation itself a “co-creator” largely autonomous of God. In my view this contradicts that most basic and original of Jewish and Christian doctrines – the absolute contrast between One Creator and his diverse creation. Nevertheless, it doesn’t actually destroy the appropriateness of the term “theistic evolution” – it just sidelines it from being a specifically Christian position on biology by sidelining the Creator from his creation.

Intelligent Design has been much criticised by both atheists and Christians of one sort or another for the supposed shortcomings of the word “design”. But it was originally coined in conscious contrast to the term in universal scientific circulation regarding evolution: “apparent design”. And, despite the protests, “design” has a long and distinguished history in theology in describing God’s purposeful activity. Whether or not one agrees with ID’s claim to be science, and so to be intrinsically unequipped for assigning design to any God, rather than just to some purposive being, the term itself fits the goal. In fact, in consideration of what I’ve already said, as a description it’s just the same category of science-metaphysics-metaphysical approach as “theistic evolution”, or as “evolution” used with the assumption of naturalism.

If we turn, then, to evolutionary creation, one problem might immediately become evident. Properly speaking, the term implies that creation (presumably God’s work) occurs through evolution. And this, of course, is how the term’s originators use it, saying that “God creates through evolution”. What they mean, I hope, is that this is true in biology – otherwise it implies that when we, or the Bible, speak of “creation” – including the origin of the Universe – it means “evolution”. So in that sense, it says too much.

I believe Denis Lamoreux coined the term in order to strengthen the theological claim of theistic evolution that God is really at work in evolution, which is an admirable motivation. I’ve no doubt he meant to restrict it to the biological realm rather than make it a universal principle. The big question, then, is whether it is theologically proper to say that God does create through evolution. As ever, it depends on that slippery definition of “evolution”.

Seen simply as “change over time”, one could invoke progressive creation of new forms, ex nihilo, as “evolutionary creation”, but with precious little reference to the science of the matter. At the other extreme, though, would it be it coherent to speak of God’s creating through processes that are “undirected and without purpose”? As I (and others) have documented extensively, that view seems to be what some evolutionary creation advocates really want to support.

Such statements as “God did not plan particular outcomes, but loved what emerged” embody such ambitions. The “free-process” (and stronger, though less popular “process”) theologies, with their emphasis on creaturely autonomy (woops – couldn’t escape the free-will question after all!) have the same implication, as does the common emphasis on “natural evil” as the necessary, though undesirable, product of a process given freedom rather than being directed by God.

All these represent a view of evolution which has no externally imposed goals, nor any concrete intrinisic final causes, such as would be required by, say, a traditional Thomistic theory of evolution, in which (as Etienne Gilson points out) “evolution” would be an unfolding of what was intrinsic to its divinely created nature, rather than a series of “spontaneus” discoveries of entirely new ways of being.

The serious question to be asked of “evolutionary creation” must then be whether it is actually possible to conceive of creation in the biblical and Christian sense without these three forms of causation. Does God create anything merely through efficient and material causes? Or, to invert the matter, can any process involving only secondary efficient and material causes actually be regarded as “creation” at all?

There are principally two heads under which to view Christian creation doctrine. The first is the theological and philosophical doctrine of creation ex nihilo, ably presented in Ted Davis’ series about Ted Peters on BioLogos currently.

Aquinas considered that creation should only be applied to ex nihilo divine acts. In this it was to be distinguished from natural generation of individuals (humans were individually “created” only in the sense that each immortal soul came directly from God – bodies were the product of secondary causes, not creation). Aquinas also conceived of God’s producing “changes” not intrinsic to things’ existing natures, but yet not miraculous and outside nature – and it seems doubtful he would view these as “acts of creation” because they are not ex nihilo. Evolutionary changes might be in this category – but only if they were the direct works of God.

In this Aquinas was really reflecting, in a detailed scheme, what was the general Christian view: God does not create by letting things happen, but by doing them. One could say that some constituent of any creative act must be ex nihilo: it could be a new form, or something else, but if it is new, it must be from God’s will and purpose, and not from some contingent event within nature.

The second head for viewing creation doctrine is the etymology and usage of the biblical term for creation, which as you all know is bara in Hebrew. John Walton’s estimable work has shown, I think conclusively, that the stress in the OT concept of creation is not on material creation ex nihilo (though this is not excluded and becomes clear through Scripture), but on functional creation. So the Genesis 1 creation account is all about the taming of tohu wabohu (doubtless also of God’s making) into the functional whole desired by his sovereign will, a functional order which forms the basis for the praise and worship of the whole κοσμος (another functional term in Greek, of course, opposed not to “non-existence” but to χαος) and especially of mankind.

The specific area of meaning of the Hebrew word “create”, then, is primarily final causation – what something is for in God’s economy. Implicit in this is that form follows function – that God makes things as they are to fulfil their roles he has for them in his wisely ordered cosmos. Additionally, as we’ve discussed here before, there is a significant link in historical theology between formal causation and the specific creative role of Christ, the Logos of God. Accordingly final causation tends to be attributed to the Father.

The Spirit’s role in creation, it seems, is as the first efficient cause – both in the initial act of creation, and in the initiation and sustaining of all events whatsoever, cf concurrence.

Does “evolutionary creation”, as it now used, meet those criteria, do you think? 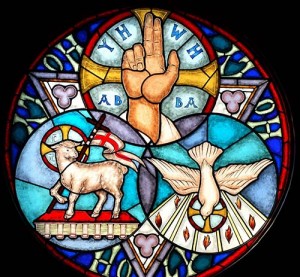