The impossible takes a little longer

Hanan (what useful links he gives!) drew our attention in a comment on my previous post to a recent quotation from John Polkinghorne on the compatibility of naturally-occurring processes with God’s will. Eddie and I both agreed that this is unexceptionable as it stands, but that it requires some contextualisation if it is to be fully endorsed.Here’s the quote, to save you searching:

“I think it’s very important to recognize theologically that if God is the creator of the world, then all these natural processes of the world are expressions of God’s will. God works as much through natural processes as through any other means. God doesn’t only work by sort of poking a divine finger to push things this direction. God endows creation with those processes which will lead to very remarkable consequences.”

As it stands – assuming an orthodox Christian context – this is fine. God creates just as surely through setting up an algorithm and executing it as through doing everything by hand. It’s so uncontroversial that every Creationist would agree. Only the most rigid occasionalist would deny it as he would all secondary causes.

But if orthodox doctrine is not assumed, things are less clearcut. For example, one could imagine, as a libellous extreme, that Polkinghorne might say this even if it were his belief that God were an arbitrary being who delights in chaos and death and deliberately created the universe to fall apart, as a disturbed child might deliberately leave a food-mixer on “Max” to see how long it would take to break. Clearly, then, “God’s will” in that case would be very different from our assumption that means “the good outcomes his wisdom intends.”

Now I have previously critiqued John Polkinghorne’s position, in depth, from a more substantial representation of his writing than one pull-quote, and it’s here. One of my main complaints is that the way he (and many others including a number of leaders at BioLogos) envision the “natural processes of the world”, as being freed from some kind of authoritarian oppression by God through the “gift” of contingency, is simply incoherent. It relies entirely on an emotional use of the moral concept of autonomous liberty and free-will being applied to the non-rational creation.

This is always applied very vaguely to “Nature” as some kind of single entity, or to “creatures” in an open-ended way that includes both real creatures like animals and abstract processes like evolution. But since the underlying thing being explained in evolution, it is not intended to apply to the actual free choices of humans – which are actually restricted by the world’s contingency rather than freed by it: if I will to go on holiday but get sick, my freedom has been curtailed.

As I said in a post to Darak on the first-linked thread, freedom entails will, which entails rational consciousness. So the idea of God’s allowing the irrational creation freedom is not a question of second-guessing what God might wish to do, but is instead of question of logical impossibility. God could not do it even if he wished to – and that is just self-evident. Here’s an illustration: 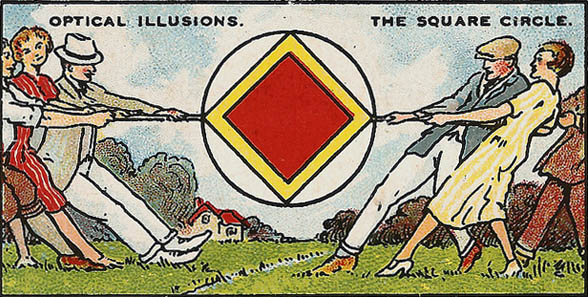 God cannot, as a philosophical commonplace states, create a square circle. And he cannot create a non-intelligent object with freedom. Maybe when you’re reading those passages that extol the benefits of God giving nature limited liberty, it will help just to substitute the idea of God giving squares limited circularity.

When John Haught writes that “the world must be endowed with an inner spontaneity and self-creativity that allows it to ‘become itself’, and thus to participate in the adventure of its own creation” one should just mentally substitute circles and squares as appropriate. (This passage, in fact, contains two incoherent themes – that of the insentient world’s enjoying adventures, ie of squares enjoying circularity; and the equally nonsensical one of things creating themselves, ie of squares contributing to their rectangularity.)

I suspect that some readers will find themselves unconvinced that, even with the distracting visual cues, the circle in the graphic above is actually square. There is a very fundamental reason for that.