A potted guide to potato peeling

Hanan’s query on the last thread was trying to sort out what I meant by “guided evolution”. He, Eddie and I all made the same distinction between a universe created with “frontloading”, so that “natural laws” elegantly do all that God might wish in a hands-off way, and a “guided” process where God continues to be active in “nudging” evolution the way he wishes it to go.

I think all who commented were agreed that we believe God somehow achieves specific results, which is the main theological point, rather than working within broad parameters such as “as long as the thing works, I don’t care too much what emerges.”

We dealt with various considerations – whether the “guided” model was an inteference with nature (and so a destroyer of our security in the reliability of the world), whether current science actually makes frontloading feasible and so on. Hopefully some of that discussion was helpful, as I hope also the link to previous stuff on concurrence was, because I remain convinced that the whole natural-supernatural dichotomy is a false one, created by the defective metaphysics of science since Descartes.

But here I want to present the case that there is little to choose, in certain ways, between the “frontloaded” and “guided” models of evolution, in terms of how much God “interferes.” And that’s because he has to do exactly as much in both cases, but simply at different stages, if he wants to achieve the same end. Let’s assume, for now, one specific outcome which God desired – perhaps the ostrich, since that is an example God himself names in Job. But name your own, as specific as you please. One good one could be “me”.

As an analogy for “creating an ostrich” let us use “peeling a potato.” Now, one might represent the frontloaded model of evolution by this famous (in Britain) example of a “Heath-Robinson contraption.” 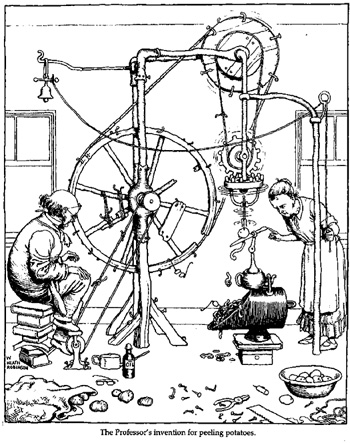 Now in this model, the Professor has created a long chain of secondary causes to achieve the peeling of his potato at a distance. I guess it’s whimsical rather than elegant, but maybe not too wide of the mark as a metaphor for frontloaded evolution. All the cleverness is built into the mechanism. All the Prof has to do is pedal (analogous to God’s sustaining of existence and natural laws) and his Industrial Award is guaranteed.

One might, however, argue that a simpler way to the same end is this: 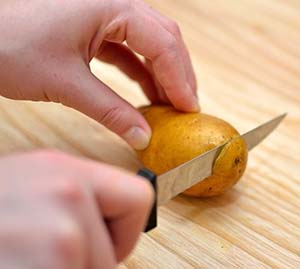 God could simply bring ostriches into existence directly. But in fact, the degree of skill necessary is no more or less than that used to make and operate the Heath-Robinson machine. The knife must be wielded with care and ingenuity, and the potato similarly handled manually. The knife still has to be skillfully manufactured and sharpened. The end result, and the creativity involved, is in the end no different, though the conversation in the kitchen might be more relaxed.

A third example might be somewhere in between these two extremes. 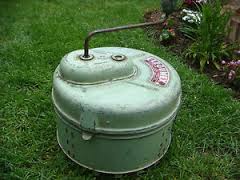 We had one of these once, though I don’t think we ever used it. But conceptually, it takes less skill in the operation than the knife, though one gets much closer to the operation than with the Heath-Robinson peeler. Yet there is a greater degree of ingenuity in the mechanism than there was in the knife, that no doubt earned someone a patent. Yet once again, between the maufacturer and the person who loads the drum and turns the handle, there is little to choose in terms of wisdom and skill: the ingenuity required to get from an unpeeled to a peeled potato is the same.

The peeled potato is all the evidence you need for the ability and intention of the human(s) involved in the job. The three methods simply input that ability in different ways at different stages.

The point is that it’s rather fruitless to ask which method is “best”. It’s purely a matter of preference: You can have simple “laws” and a lot of hands-on skill, or complicated laws and a more automated outcome. You monkey with the laws, or you money with the materials – it’s all the same creative activity in the end.

Supposing that there were no signs of cosmic fine tuning known by science; nothing seen in natural laws to make life particularly likely, and a lot to make it very improbable. No convergent evolution, no special condtions on earth. How would a Christian conclude God had created all the variety of life? Surely that he had somehow massaged the crude laws that existed to produce extraordinary outcomes. And what difference would it make to the evidence for God’s wisdom and power? I suggest none whatsoever, though it might subtly bias it.

In human affairs there’s a tendency to automate tedious tasks, but to prefer individual solutions for making music, for child care or for writing to those you love. Which choice is better is not capable of determination by science, and the same is true in evolution: one might be able to conclude from the evidence that God has worked in a certain way, but you can’t say that he ought to.

My brother does a lot of computer scripting. We were joking recently that he could maybe write a program to invent news with which to e-mail me regularly even if he had, in fact, died some time ago. To pass the Turing Test that way would be a great intellectual achievement, but there are other considerations too. Aren’t there?