Cosmology through the ages #4 – Modern

When Nicholas Copernicus first proposed his heliocentric model of the universe in 1543, it appears to have been primarily for the reason of returning astronomy to the Aristotelian ideal of perfect circles abandoned by Ptolemy’s equants, thus simplifying (and idealizing) the model. Though sources about his thinking are scarce, he was wedded enough to Aristotle still to consider the earth to be the lowest place in the universe, even though that was a problem for his cosmology:

But the fact that Copernicus turned the earth into a planet did not cause him to reject Aristotelian physics, for he maintained that “land and water together press upon a single center of gravity; that the earth has no other center of magnitude; that, since earth is heavier, its gaps are filled with water…” (Revolutions, 10). As Aristotle had asserted, the earth was the center toward which the physical elements gravitate. (Stanford Encyclopaedia of Philosophy) 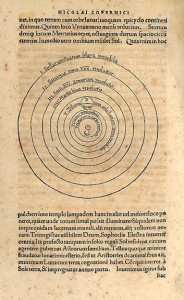 But because Copernicus’s work is usually seen through the eyes of modern science rather than philosophy, one significant change from the older representations of the solar system is seldom remarked. And that is the absence of any theological reference – the fixed stellar sphere is shown without the throne of God. One can only speculate on the reasons for this. It was by no means due to a secular spirit, as he wrote:

To know the mighty works of God, to comprehend His wisdom and majesty and power; to appreciate, in degree, the wonderful workings of His laws, surely all this must be a pleasing and acceptable mode of worship to the Most High, to whom ignorance cannot be more grateful than knowledge.

It would be nice to think of it as a return to the Hebrew conception of God  invisibly permeating his whole creation, though that would be historically unlikely. Whatever the reason, though, it is emblematic of the course that western humanism took, particularly with regard to natural philosophy. The general dissatisfaction with Aristotle that led to his eventual (and excessive) eclipse led to a simplification of the complex hierarchical cosmologies built up by late mediaeval and early modern academics.

In general, though, the process appears not to have been the result of a rejection of the Great Chain of Being (though it was in fact an assumption with no empirical verification), but the progressive removal of links in the chain. The pattern of change is interesting. For example, the rejection of magic, as alchemy turned into physics and chemistry, removed those Pythagorean harmonic resonances we saw last time (though Kepler still had them strongly in mind in his astronomy), and gradually led as well to the sidelining of astrology from astronomy.

This encouraged the removal of astronomy from what one might call spiritual cosmology: the celestial spheres increasingly just were, rather than being stepping stones to God – after Galileo the extra-terrestrial realm was increasingly seen to have the same constituents as earth, rather than being the purer aetherial realm the Greeks had envisaged. In other words from this point on, cosmography seems to have little relationship to cosmology. This may well have been a good thing: why should they correspond? In the end the only connection of astronomy to meaning became the spurious “Copernican principle”, that earth must be unimportant because it isn’t the centre of the universe (though to Copernicus and his forbears, it had been unimportant because it was at the centre).

The overriding trend that had started in the Renaissance, that is, to emphasize the autonomy of man, was summed up in Protagoras’ aphorism, “Man in the measure of all things”. It was pursued consciously in the Enlightenment and, religiously, produced Deism and its European equivalents. As this diagram shows, stripping out spiritual entities like angels, whilst retaining a concept of the chain of being, resulted in a separation of God from his creation. Though he had made a heirarchical creation, he was distantly removed from it as a distant lawgiver or clockmaker, quite the opposite of the immanent God of the biblical cosmic temple , and therefore became largely irrelevant to the world.

For example Carl Linnaeus was deeply religious, even mystically so at times, but was typical of that eighteenth century religious flavour by being mainly a natural theologian interested in God’s omnipotence and transcendant reason, rather than the whole biblical revelation. His classification of animals, plants and minerals was, in essence, a detailed description of the Great Chain of Being with a long dotted line up to God.

This was the time, though, when anti-clericalism and practical atheism were taking root, and the eventual removal of God altogether from intellectual consideration left the Chain of Being intact, but very much shorter, in the twentieth century. The other fascinating aspect is that through evolutionary thought, and particularly Darwinism and its successors, the “polarity” of the chain was reversed so that, rather than being a chain down from God, through man, to chaos and non-being, it became a chain up from chaos culminating in man as the highest entity. One might also pencil in the hope of some people for transhumanist or evolutionary progress above what mankind is currently. Astute readers will remember that this is the selfsame worldview critiqued by Dionysius of Alexandria in the atomism of Democritus and Epicurus, during the third century.

I must add, for completeness, what we might call the “Postmodern” stage anticipated by C S Lewis and prevalent today. And that is the final disruption of what remains of the Chain of Being by the denial that mankind is higher than the chaos from which he arose. If we are still “really” just atoms, then the heirarchy of the chain is mere illusion – nothing is ultimately going anywhere. Bacteria are the dominant form of life by sheer numbers (Gould), and evolution has no inbuilt tendency to progress (Koonin). This illustrates that what the Chain represented, for all its faults, was meaning – or to put it another way, “cosmos”. As Dionysius had said of atheistic atomism, it “finds its refuge in infinite disorder (akosmia).” Or “Humans came about through an unguided process that did not have us in mind” (Kenneth Miller).

My original cosmic temple picture had no connection with the Chain of Being (it predated it by many centuries), but in another way it gave meaning to all things equally, from their relationship to God in his sustenance and providential government. But since we are all inheritors of the modern “Short Chain of Being” worldview through our culture, it being all that modern science admits to the cosmological table, it’s worth asking those who believe in God how he might be fitted into this cosmological picture. That is, if the religious worldview is to relate to the secular one I’ve illustrated and not be, in S J Gould’s terms, a non-overlapping magisterium, which is another way of saying “a personal quirk”. Here are a few tentative suggestions.

This would seem to be the option chosen by the Semideists and Free Process theologians, who believe that God created a largely autonomous evolutionary process. Seen diagramatically it looks distinctly odd – it’s a top-down process like the Great Chain of Being, but God is only intimately involved in the very lowest stage, setting chaos on the road to becoming. Creation (perhaps) works its way back to him through man. Spiritually, of course, it implies the popular TE idea of the Fall being, in fact, a Promethean Rise to greater wisdom from animal selfishness (see this recent exchange on  BioLogos (from #86207). It has the advantage of interfering minimally, if at all, with the predominant materialist worldview.

By some this “hands off” cosmology of the natural world is combined with an altogether different religious picture of a God who acts “hands on” in salvation both historically and individually. Maybe the illustration illustrates that if such a “double cosmology” is adopted, there must be very good reasons supplied for dividing God as Saviour from God as Creator so radically. I’ve never seen a good case offered for it (in fact, I’ve never seen any case offered), and it seems sometimes to be motivated by a desire to hold on to the dominant secular atomism and Christianity at the same time, whether or not they are compatible).

In this alternative God is creation (pantheism) or is in it (panentheism), as suggested by the Process Theology of a number of the prominent science-faith scholars like Ian Barbour and Arthur Peacocke. Both God and creation are in a process of evolution, or becoming, and so God fits into the upward trajectory of the Short Chain of Being quite comfortably. The same may be said, more messily and less coherently, of the Open Theistic view, in which a transcendant God empties his own nature to co-evolve with his creation: in fact, he becomes an effect of his own creation, perhaps more than the cause of it.

What’s this? This is just my poor attempt to return to our original starting point, the cosmic temple of God seen in Genesis. Whatever the current scientific fashion sees as being the content of creation, and whatever direction it is assumed to be moving (up, down or sideways), it is still constituting God’s temple and “dwelling in his courts”. It is created, sustained and directed by the Logos of God, through his Spirit, who is, as he always was, all in all, in whom we live, and move, and have our being. It’s not a very elegant combination of images, but I suggest it’s closer to a true Christian understanding than some of the others.

11 Responses to Cosmology through the ages #4 – Modern