Cosmology through the ages #3 – Mediaeval

Enter, stage left, the Great Chain of Being…

This, an idea common to much ancient Greek philosophy, held that all that exists is linked in a continuous chain, or hierarchy, from top to bottom. As we saw in the last post such ideas had little impact on early Christian thought, which though interacting with philosophy was fundamentally biblical, and concerned with religious truth, leaving science to the scientists. Exceptions were writers like the mainly Platonist Origen (whose views were considered flaky as a result) and, notably, the heretical Gnostics.

The Gnostics promoted Platonic and Middle Platonic ideas of a heavenly hierarchy from intrinsically evil matter to God, via an incompetent Demiurge who actually made us. In the third century the pagan Neoplatonist Plotinus

…taught the existence of an ineffable and transcendent One, the All, from which emanated the rest of the universe as a sequence of lesser beings. Later Neoplatonic philosophers, especially Iamblichus, added hundreds of intermediate beings such as gods, angels, demons, and other beings as mediators between the One and humanity.

All this was of little interest to most orthodox Christians. By the time of Maximus the Confessor (see previous post) the Western Roman Empire had more or less ceased to exist for a century after barbarian invasions and internal strife. It was culturally cut off from the eastern empire based at Constantinople, which in turn became increasingly beleaguered by barbarians and then by the Muslims. Greek literature was therefore largely lost to the west. The Christian most effective in limiting this loss was Isidore of Seville (c. 560–636), “the last scholar of the ancient world”, who tried to compile a rather uncritical summa of universal knowledge, the Etymologiae.

Our old Saxon friend St Bede used mainly Isidore and the Roman Pliny in his brief cosmology On the Nature of Things (c703). Like most educated Christians he accepted the Classical view that the earth was spherical, and he includes an Aristotelian hierarchy of the four elements:

“Nature contains [the earth] and denies it any place to fall” (Pliny, NH 2.65.162). Situated in the centre or pivot of the world, the earth, being heaviest, holds the lowest and central place in creation, since water, air and fire as it were by the levity of their nature and likewise by their situation rank above it.

Otherwise, there is no real sign of the Chain of Being in Bede – his book depends on ancient knowledge of natural history, but little on philosophy.

Things began to change greatly around the turn of the millennium, as Christian scholars became more interested in Greek works from the East, but there was a massive surge when translations from Arabic sources became available in the late 11th century, especially translations of the works of Aristotle, who had been almost forgotten since the 7th century. Thomas Aquinas, of course, was responsible for a thorough synthesis of Aristotle, plus a bit of Plato, with Christianity – but at a cost. 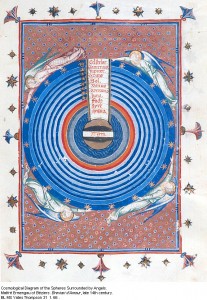 Ptolemy, the astronomer and astrologer, was also translated into Latin in the 12th century, giving his cosmography greater prominence. Ptolemy was an Aristotelian, and his geocentric scheme, corresponding to Aristotle’s scale of elements, was intrinsically heirarchical and theological. Suitably christianized, his outer Empyreum, seat of the prime mover, became God’s heaven. The earth became the universe’s lowest and least prestigious place (though hell was soon placed at the earth’s centre), and so separated from God by a hierarchy of celestial spheres. 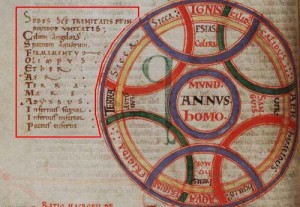 Society and the Church having become more heirarchical too, this cosmological “gradualism” became increasingly appealing. Already, as in the 1110 manuscript to the right, a hybrid spiritual hierarchy had been attempted. Translated, the box reads: the throne of the triune God -> angelic heaven -> upper waters -> firmament -> Mt Olympus(!) -> aether (the finest, 5th element) -> air -> earth -> sea -> the abyss -> three layers of hell. Compare that to the Hebrew cosmic temple or the God-suffused cosmos of St Basil – it’s very different conceptually. 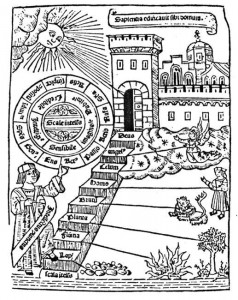 Aristotle’s natural history formed a hierarchy too, in this case (on the left) ranging from minerals up to God, who was once more separated from his creation (including man) by intermediaries. Through the classical infatuation of the Renaissance, this top-down layering became as much a universal principle of existence as evolution is today, whether the world was considered physically, biologically, intellectually, politically, socially or spiritually. 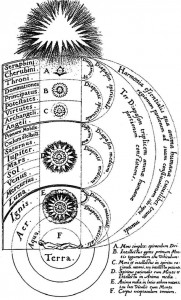 For example, in Elizabethan times, your social status dictated your dress, in whose presence you removed or donned your hat, and so on. The Aristocracy was of a higher divine and natural order than the peasant. What had been due respect for God-ordained worldly authority in the Bible became the Divine Right of Kings in the sixteenth century. So by the time of Francis Bacon’s great influence, the physician Robert Fludd (1574-1637), as we see from this alchemical diagram nine ranks of spiritual entities, nine astronomical/astrological levels and three elements separate us from God – the chain of being has grown exceeding long. In common with most natural philosophers then, Fludd believed in the cosmic harmony of magic – under God, of course – as I described in a previous post. So here the planets are truly in a spiritual continuum with the “powers and principalities”, as well as in a physical relation. The brackets in the diagram represent various supposed Pythagorean harmonies, the basis by which not only astrology but natural magic and medicine were held to work.

It would seem from all this that by integrating the once lost classical philosophical ideas into Christian cosmology Western civilisation had managed to produce an integrated system of knowledge that unified pretty well everything from fundamental physics to theology.

What that meant for science was a mixed blessing: clearly early modern science kicked off partly from an Aristotelian, Pythagorean and Platonic intellectual foundation, but found it quite hard to jettison its errors along the way. Bacon’s idea of controlling nature for man’s benefit came partly from the Hermetic magic recovered and developed by the Renaissance humanists, just as its mythical drive came from the example of Prometheus. But these were balanced and eventually displaced by the greater influence on those like Boyle and Newton of Christian creation doctrine.

The effect on Christian doctrine itself was arguably even less productive. Certainly classical philosophy gave theology a language of ideas that is still valuable today – the Patristic authors had discovered that right at the start of Christian thought. Aristotelian metaphysics, in particular, still has much to offer theology. But the synthesis also tended to take theology into strange places, not only encouraging a very different religious world from that taught in the Bible, but also giving Christians a view of the natural and human worlds which was very different from the Scriptural worldview, and in fact much less life-enhancing.

One could see it as a five-century-plus object-lesson in the dangers of submitting your theology to outside authorities, whether they be from science, philosophy or metaphysics. Needless to say it all seemed perfectly obvious intellectual progress at the time, compared to the unphilosophical theology of the old guys like Basil.

What happened next was that the Great Chain of Being began to break up, so that there was no longer a united religious and scientific view of the world. Whether that’s a good thing or a bad depends partly on how much you feel the classically-influenced mediaeval view represented either physical or spiritual reality truthfully. I’ll let you make up your own minds on that … after the final part of the series.

7 Responses to Cosmology through the ages #3 – Mediaeval