The power of words

Here’s a quick summary of how we normally see the relationship of words and language to the physical world. The real world is “out there”, and words are arbitrary (and so ultimately meaningless) labels for what we perceive of it. Further, as several previous posts have discussed, what we perceive is far from the physical reality (what Owen Barfield calls “the unrepresented” or “the particles”). As he puts it, “There is no such thing as an unseen rainbow.” And so we live in a world of illusions, which we describe using arbitrary sounds. And if the reductive materialists have their way, we experience all that with minds that are also illusory epiphenomena of “the particles”.

As (again) we’ve discussed at length on The Hump the attempt to see through to the unperceived reality by mathematical science is just the imposition of another symbolical human language on it, a language that abstracts only the quantifiable logical relationships from the reality. As Arthur Eddington showed, it turns elephants into numbers that will work just as well for fabulous jabberwocks.

There are other problems with the mathematical approach too – equations describe essentially static truths and so render change and causation illusory too (2+2=4, but does nothing to cause it, and e=mc^2 remains unchangeably true both in prosperity and in nuclear armageddon), and they have big problems with accounting for things like the arrow of time and entropy, leading to some desperate measures.

There are, of course, those who “face up to stark reality courageously”, and are content to “make their own meaning”, which a little reflection and observation shows to be no more than compartmentalising life into belief in nihilism and practice of realism. Such people have two imaginary minds – can epiphenomena really contradict each other so thoroughly? 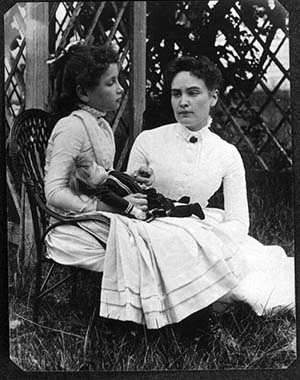 Helen Keller with teacher Anne Sullivan (herself deaf and blind) 1888

There are other ways of seeing things, though, that are both more realistic and more positive. The serendipity with which themes often coalesce in my reading almost persuades me that I have a mission to discover some great truth –  unfortunately, if so, I’m stupidly blind to it. Glimmerings do emerge, however, in this case from a reference to the famous deaf and blind social activist Helen Keller, in the book on Goethian science I finished recently. She had a rare experience in that, although growing up in a sightless and soundless world, she was around 18 months old when her illness struck, and I take it that the few touch-signs she learned and the non-verbal development prior to that time is what enabled her to remember and articulate some of what her early childhood was like.

A passage in her autobiography shows how she “saw the light” of language at the age of eight. Impatient with her teacher’s repeated attempts to sign letters on her hand, she smashed a doll she’d been given:

Neither sorrow nor regret followed my passionate outburst. I had not loved the doll. In the still, dark world in which I lived there was no strong sentiment or tenderness. I felt my teacher sweep the fragments to one side of the hearth, and I had a sense of satisfaction that the cause of my discomfort was removed. She brought me my hat, and I knew I was going out into the warm sunshine. This thought, if a wordless sensation may be called a thought, made me hop and skip with pleasure.

We walked down the path to the well-house, attracted by the fragrance of the honeysuckle with which it was covered. Some one was drawing water and my teacher placed my hand under the spout. As the cool stream gushed over one hand she spelled into the other the word water, first slowly, then rapidly. I stood still, my whole attention fixed upon the motions of her fingers. Suddenly I felt a misty consciousness as of something forgotten–a thrill of returning thought; and somehow the mystery of language was revealed to me. I knew then that “w-a-t-e-r” meant the wonderful cool something that was flowing over my hand. That living word awakened my soul, gave it light, hope, joy, set it free! There were barriers still, it is true, but barriers that could in time be swept away.

I left the well-house eager to learn. Everything had a name, and each name gave birth to a new thought. As we returned to the house every object which I touched seemed to quiver with life. That was because I saw everything with the strange, new sight that had come to me. On entering the door I remembered the doll I had broken. I felt my way to the hearth and picked up the pieces. I tried vainly to put them together. Then my eyes filled with tears; for I realized what I had done, and for the first time I felt repentance and sorrow.

Her point was not the prosaic one that she had realised the link between a word and an external reality (water), but that the acquisition of this first piece of language actually opened the whole world of thought, and made that reality so much more than dull sensation. The world became real to her through language. 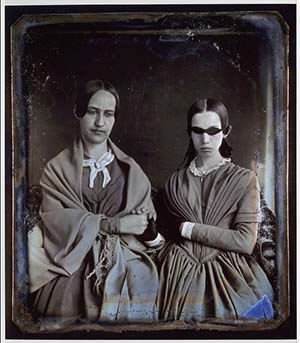 Laura Bridgman with her own teacher, Sarah Wright, c.1845

Keller’s rescue came because her parents read Charles Dickens’ description of the first blind-deaf-mute to be taught sign language, Laura Bridgman, in American Notes, which providentially I was reading simultaneously with the book on Goethe. I noted then that Dickens describes the teenage Bridgman, when alone, thinking by writing in the palm of her hand. The adaptability of humans to adapt to alternative languages is remarkable, but these two stories also show that language and thought, and therefore perception of reality, are inextricably related.

Since the only reality we can, as humans, encounter is that which we perceive, there is therefore a real sense in which language is what creates reality. And since language is an inherently social construct, the perceived world is in no sense what an individual rational mind tries to make rational sense of, as he gazes out from his Cartesian isolation. Instead, it is the shared construct of a human community.

Incidentally, that raises an interesting chicken-egg conundrum: only the human mind is capable of language, but language must be learned (as Bridgman and Keller showed) to form the human mind. That’s for another time!

These kind of conclusions are surprising and shocking to the western mind, brought up as we are with the idea of autonomous, almost disembodied, reason and with the complete externality of the “real” world. But they were commonplace to the sophisticated mediaeval mind (and instinctively understood even by the common people). Very basically, there was then an inherent understanding that humans are in true continuity with both other humans, and with the world beyond. In Barfield’s word (taken directly from thinkers like Aquinas), the underlying reality of things is participation. And that participation was seen to be vast – bringing the whole universe within the compass of the human soul. Small wonder that mediaevals saw man as a microcosm of the universe.

Unlike our own “folk psychology” (which in the last half millennium has learned enough from science to draw a sharp distiction between “the self” and “the rest”, but not enough to be thoroughly convinced that “the rest” is “really” quite different from what we perceive, though TV science is working on it), mediaeval people already knew that the world was fully constructed only in the human mind, and what’s more they knew that the spoken word was the agent that brought about that construction.

To name something was, in a very real sense, to bring it into being, at least to the human mind – and they rightly saw that to speak of a reality not available to the human mind was a singularly unproductive activity. Grammar was an academic obsession not because it was a civic virtue, but because it corresponded to an understanding of the whole world.

So on the one hand, language was a product of mind, and the world which was perceived and understood through it was therefore also inseparable from the mind. On the other, they took the diametrically opposite course to today’s materialists, in that rather than the assertion of an objective physical reality “out there” which progressively emptied out the universe of its significance, the activity of the mind progressively suffused meaning into everything it saw and understood. Reality, then, can either be human and infinitely rich in meaning, or independent of the human mind and ultimately meaningless. And that largely hinges on how mind and language are conceived… though God makes a difference, and that’s matter for another post.

In one soul we may be entertained and taken up with innumerable beauties. But in the Soul of Man there are innumerable infinities. One soul in the immensity of its intelligence, is greater and more excellent than the whole world. The Ocean is but the drop of a bucket to it, the Heavens but a centre, the Sun obscurity, and all Ages but as one day. It being by its understanding a Temple of Eternity, and God’s omnipresence, between which and the whole world there is no proportion. Its Love is a dominion greater than that which Adam had in Paradise: and yet the fruition of it is but solitary. We need spectators, and other diversities of friends and lovers, in whose souls we might likewise dwell, and with whose beauties we might be crowned and entertained. In all whom we can dwell exactly, and be present with them fully. Lest therefore the other depths and faculties of our souls should be desolate and idle, they also are created to entertain us. And as in many mirrors we are so many other selves, so are we spiritually multiplied when we meet ourselves more sweetly, and live again in other persons. (Thomas Traherne, Centuries of Meditations II.70)

1 Response to The power of words